1) Papuans Behind Bars-August 2014: Widespread crackdown on civil society intensifies
At the end of August 2014, there were at least 74 political prisoners in
Papuan jails.

The situation in Papua deteriorated this month, as Indonesian security forces intensified their crackdown on Papuan civil society. Lawyers,
activists, human rights defenders, priests, tribal leaders and journalists were targeted for arrests, intimidation, beatings and murder. The arrest
and continued detention of two French journalists in Papua and a Papuan tribal leader highlighted the ongoing restrictions on access to Papua.

While the West Papua National Committee (Komite Nasional Papua Barat, KNPB) has consistently been targeted since their formation in November
2008, there has been an observably increased crackdown on them since April 2014. In the past five months, a total of 81 KNPB members were arrested.
Data collected by Papuans Behind Bars shows that in April, there were six KNPB-affiliated arrests and in May, there were three further arrests. The
number of KNPB arrests in June rose to 24 as Indonesian authorities aimed to prevent peaceful events commemorating 1 July, a date Papuans consider
to be their national day. In July, there were 36 KNPB arrests in relation to a planned boycott of the Indonesian Presidential elections, the highest
recorded number of KNPB arrests in 2014. This pattern continues in August with the arrests of 12 further KNPB members. One of the 12 arrested was a
16-year-old boy, who faced ill-treatment by Navy officers in Manokwari. Martinus Yohame, leader of the KNPB Sorong branchs, was kidnapped,
tortured and murdered. Human rights NGO Amnesty International issued a statement condemning the murder and called on Indonesian authorities to
carry out a prompt, thorough, competent, and impartial investigation into the killing.

In June and July 2014, mass arrests were recorded in Boven Digoel, Wamena and Timika. The pattern of mass arrests continued this month with the
arrests of 20 people including women and children, in Nimbokrang district on the basis of alleged affiliations with the Papuan National Army/Free
Papua Organisation (Tentera Papua Nasional/Organisasi Papua Merdeka, TPN/OPM). They were detained without arrest warrants and were beaten on
arrest. Human rights lawyers were continuously obstructed in their attempts to gain access to the detainees in this case who remain in
detention.

The humanitarian situation in Lanny Jaya is of particular concern following the reported burning down of traditional honai houses by the
Indonesian military and police forces. Information received from the Advocacy Network for Upholding Law and Human Rights (Jaringan Advokasi
Penegakan Hukum dan HAM Pegunungan Tengah Papua, JAPH&HAM) and the Fellowship of Baptist Churches of Papua (Persekutuan Gereja-Gereja Baptis Papua), among others, described reprisal attacks on civilians in Pirime district in Lanny Jaya regency. An unconfirmed number of people remain
internally displaced, as they are unable to return to their villages due to destabilising military activity in Pirime district.

You can read the full update here:
http://www.papuansbehindbars.org/?p=3034 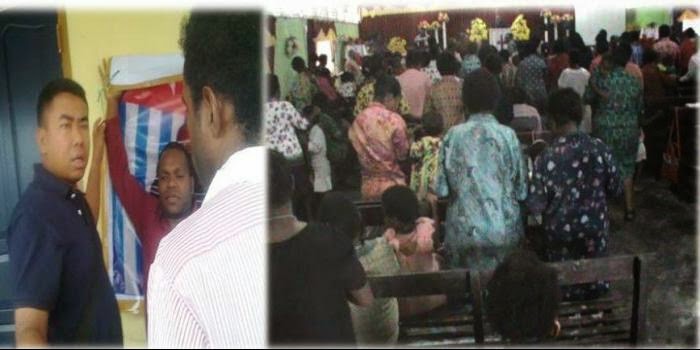 Responding to the call, a number of places of worship in Papua holding grief. Most of the church to pray for the souls of Dr. John Otto Ondawame it's open in worship on Sunday, (07.09.14).

"He (police chief) remove the banner and ban the people to take a picture. Worship Him disturbing situation in the church," said the source majalahselangkah.com in Timika.

"Police chief says do not install this National Grief cloth banner in front of the church here. Do not let anyone pass and officials could see. Must be removed from the front of this church," the source said, citing local police.

"Exactly at 09:45 TNI and Police dong (them: red) came to monitor the situation in front of the Ark Church Church Kingmi. Currently the community is worship. But, worship is safe," he said through his cell.

Roberth Yelemaken and Oni Weya arrested for writing down the words, "Indonesian illegal referendum Yes" on the wall. Also, drawing a picture of the Morning Star flag and the Red and White Flag. (Read: Write These Words, and Persecution Police Arrest 2 Member KNPB in Manokwari).

As a token of gratitude for the liberation of these two activists, KNPB Manokwari held joint worship at 3 Septerber KNPB Secretariat in 2014 in Manokwari, West Papua. Worship celebration led by Reverend Yelemaken.

In a statement received majalahselangkah.com, Rev. Yelemaken emphasizes about truth and gratitude.

"Thanksgiving is always in all things and meditate on the Word day and night then you are in God and God is in you," the message the pastor.

So, he said, today KNPB talk talk part of an independent Papua Papua save people, because the Lord Jesus came and died on the cross to save mankind.

"And today we talk KNPB Papuan independence of the safety of the people of the nation of Papua are being oppressed toward annihilation," he said.

He explained, "When we are in the fields of the Lord in Papua independence struggle bererti the lover of our Lord in a way bertamabah more suffering.'s Not the position, not the good life and others do not. Him, Lord Jesus, give us the added burden, suffering more and more. because the Lord Jesus himself dielok-chic, spat until killed. Though He was a great and true while we are human. "

So, he said, KNPB as the media Papuan people who are struggling for the truth will inevitably face a lot of challenges to the lives of many activists removed.

"Surely all that we will encounter when walking along the KNPB," he said.

Regarding vandalized done Roberth Yelemaken and Oni Weya, said, Alexander Nekenem, "Democratic space in West Papua completely closed by the Police Force so we took the step to speak walls, the walls talk. Yet it was a problem." (GE / 003 / MS)