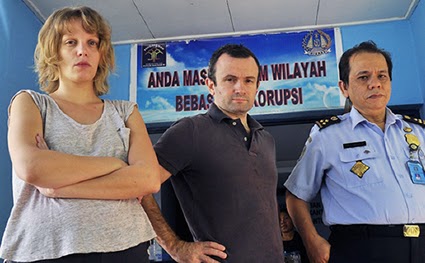 Two arrested French journalists, Thomas Dandois (centre) and Valentine Bourrat (left), from Franco-German television channel Arte, are photographed with an unidentified Indonesian immigration official in Jayapura city in Papua province last week. Image: AsiaOne
Pacific Scoop:Report – By Pacific Media Watch
Indonesian intelligence officers are targeting West Papuan journalists and independence leaders for “potentially having contact” with two French journalists who were arrested in West Papua almost a month ago, says independent Australian-based agency West Papua Media.
Arte Television journalists Thomas Dandois, 40, and Valentine Bourrat, 29, were arrested on August 6 in West Papua for reporting on human rights abuses in West Papua. Their lawyer said this week that they were likely to be put on trial instead of being deported as other foreign journalists had been.
West Papua Media reports that Indonesian intelligence officers are targeting anyone they think may have met with Dandois and Bourrat before they were arrested.
“West Papua Media has been under severe security threat from Indonesian agents in Papua and Australia, associated with the arrests of French journalists,” the news website said this week.
Editor Nick Chesterfield told Pacific Media Watch there were ongoing threats against staff and stringers. He called on the Australian government to intervene against Indonesian “abuses”.

“The journalists and civil society workers in West Papua are the people we are most concerned about. We still have grave concerns for the safety and security of journalists, civil society, human rights investigators and people who have been in contact with Dandois and Bourrat or who have been mistakenly accused by the Indonesian security forces of having had contact.
“There are also ongoing threats to West Papua media staff inside Australia, who have been subjected to major security threats from Indonesian security personnel. We are calling on the Australian government to do everything it can to stop Indonesian security personnel to stop operating against both Australian citizens and citzens of West Papuan descent in Australia, and for Indonesia to understand that journalism is not a crime.
“Indonesia should stop theatening the security of people whose only work is to expose human rights abuses. This is to violate the very principles of democratic values. This whole case shows that Indonesia is nothing more than the predator of press freedom.”

Immigration chargesSo far, Dandois and Bourrat have been charged with violating immigration laws and could be jailed for up to five years if found guilty. The two may also be charged with “subversion”.
This week, Indonesian immigration officials extended the detention period for the two arrested French journalists, saying they were still interviewing “witnesses”.
The news site said that independence leader Martinus Yohame, who was kidnapped in West Papua after being lured to a meeting on August 20 and found murdered about a week later, may also have been targeted for assassination on suspicion of having had contact with Dandois and Bourrat.
“West Papua Media has highly credible but unconfirmed reports that Martinus Yohame was also targeted by Indonesian intelligence for potentially having contact with the two French Journalists still being detained in Abepura. Many of our people are currently in danger because of this situation,” the news website said.
Yohame vanished the day after holding a press conference in West Papua where he condemned the Indonesian military occupation.
The latest interrogations of local media and sources are likely to have a chilling effect on media freedom in a country where foreign journalists are already effectively banned.
New Zealand journalist Paul Bensemann reported undercover from West Papua last year, and told PMW recently that constantly hiding from Indonesian police and intelligence agents meant that foreign journalists feared for the safety and wellbeing of their West Papuan sources.
Journalists killedWest Papuan editor, Victor Mambor recently told a seminar in New Zealand that journalists had been killed by the Indonesian military.
Journalist Ardiansyah Matra’is, who worked for Mambor’’s newspaper, Tabloid Jubi was killed in 2010 by the Indonesian military, and found naked and handcuffed, having been thrown into a river.
Two other journalists – Leiron Kogoya and Marlon Mramra -– had been killed in the last six years over stories they had written, one for covering a story about police who raped a civilian in the police station, Mambor said.
In the same period, seven foreign journalists had been denied visas to West Papua and another five deported when they were caught by the military.
Those foreign journalists who were allowed to report were assigned an Indonesian intelligence officer to tail them everywhere, whether they liked it or not, whose accommodation, food and transport costs were charged to the media organisation.
Source: Pacific Media Watch 8942
Posted by AWPA Sydney News at 2:18 PM