2) Catholic students call for an end to Papua conflict 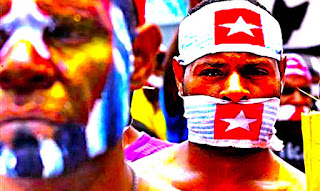 IMAGE: AK ROCKEFELLER ON FLICKR
JENNY MUNRO - 03 AUG, 2016
Indonesia and the Melanesian Spearhead Group need the United Liberation Movement for West Papua.
In recent times the Melanesian Spearhead Group has been considering whether or not it should grant full member status to the United Liberation Movement for West Papua (ULMWP), with a decision on the controversial issue deferred at the Group’s most recent meeting.
When a decision is made however, the outcome will come down to  dialogue and discussion versus repression.
West Papuans have been voicing their grievances against Jakarta unabated for six decades now in spite of silencing tactics from the Indonesian state. Repression is clearly not only futile, it results in more violence.
In the face of ongoing state violence to achieve political ends, Indonesia’s leaders need continued pressure to fulfil the principles of reform and democratisation. It is not only West Papuans who are drawing attention to unmet human rights promises. The ULMWP, as a voice for human rights in West Papua, represents another voice in support of rights and freedoms in Indonesia.
The ULMWP ‘threatens’ to promote political dialogue and resolution to West Papuan grievances. The Indonesian government would do well to resist the urge to crush and isolate the movement. The ULMWP also builds on a history of West Papuan advocacy for non-violent, political solutions to questions of security, rights, and development.
The Indonesian government agreed to political dialogue, including open and official discussion of past and present abuses, in the Special Autonomy law of 2001, but has avoided fulfilling this promise.
Instead of going away, West Papuan activism has snowballed, outreach efforts redoubled, and allies have been gained. If not ULMWP, there will be another organisation that threatens to complicate Indonesia’s sway over a large part of the international community.
The Indonesian government has reacted with gusto to the threat of internationalisation represented by the ULMWP, dangling talk of new jobs, trade, transport routes, and diplomatic engagement with Asia for MSG countries.
The accusation that the ULMWP only represents overseas West Papuans is another sort of reaction, an attempt to discredit the organisation and prevent it from participating in the MSG and other international groups. If the ULMWP has no support among Papuans inside Indonesia, then why has the government been trying to repress support for it in cities around Indonesia?
The MSG needs to embrace the ULMWP to further its goals of stability, peace, safety and livelihoods for Melanesians. As MSG leaders like Vanuatu Deputy Prime Minister Joe Natuman has said,the MSG was established for the protection of the identity of the Melanesian people, the promotion of their culture and to defend their rights to self-determination, land and resources.
Moreover, what Indonesian leaders are saying to the MSG forum may be quite different to what they are claiming at home. The MSG should be wary of being represented, or used, as Indonesia’s political pawn in a longstanding battle against West Papuans.
When the MSG recently deferred its decision on full membership for the ULMWP, Luhut Pandjaitan, Indonesia’s then Coordinating Minister for Political, Legal and Security Affairs, appeared to claim victory, viewing it as proof of Indonesia’s power and a vindication of its repressive, dogmatic approach to West Papua. A headline in Jakarta proclaimed, “MSG rejects separatist bid.” Full membership in the MSG, which Indonesia is angling for, would help it to block dialogue and action on West Papua.
On the issue of whether or not West Papuans need or want the ULMWP in the MSG, I think they will continue to speak for themselves. The question is whether or not these voices should be heard and included in a diplomatic forum. The MSG is an ideal context for West Papuans to raise issues regarding their security, rights, culture and livelihoods precisely because dialogue, mediation, and negotiation are possible.
This is something that the Indonesian government has not yet been willing to offer West Papuans, and the growth of street-level and everyday forms of political violence, whether in Yogya, Jayapura or Enarotali, shows that this position is increasingly untenable and detrimental.
Jenny Munro is a research fellow in the Coral Bell School of Asia Pacific Affairs, The Australian National University.

2) Catholic students call for an end to Papua conflictIndonesia government must agree to mediated talks, they say

August 2, 2016 Benny Mawel, Jayapura Indonesia
Indonesian Catholic students have called on the government to listen to the grievances of the people of Papua and resolve longstanding conflicts.The call was made at the end of a four-day Catholic Student Association of the Republic of Indonesia conference in Jayapura on July 31.Conference participants ­ association members from 70 chapters across the country ­ said the central government should dissolve the current investigative team formed by the Coordinating Ministry for Political, Legal and Security Affairs, and sit down with the Papuans.An ongoing conflict in West Papua between the Indonesian government and indigenous groups seeking independence or greater autonomy has led to many rights abuses, according to rights groups and Papuan activists.Many Papuans look upon the investigative team, set up by Indonesian President Yoko Widodo to look into the alleged abuses, with suspicion.They claim the team ­ made up of human rights commissioners, supreme court judges and rights advocates ­ are not independent and subject to interference from central government."We encourage independent parties to mediate and help settle the problems," Angelo Wake Kako, the association's chairman, said on July 31.He also said that Catholic students are fed up with the bloodshed. "We never want to see murder again," said Kako.Catholic students have also urged President Widodo to remove restrictions and allow foreign journalists free access to Papua."We demand [the] government gives access to foreign journalists so they can visit Papua, without interference, including from the military," said Kako.Mario Yumte, a member of the association's Jayapura chapter, said Papua's longstanding conflicts need to end with dignity.Catholic students see it as their duty to encourage the relevant parties to sit down, talk heart to heart, and listen to each other, she said."If we are silent on the Papua conflict it means we do not care about humanity," said Yumte.Joseph Rahawadan, a senior member of the group, said that Jakarta needs to listen to the struggles and hopes of the Papuan people."As long as there is no serious dialogue with the Papuans, the problem will never end," said Rahawadan."The central government needs to send a team to immerse themselves in the lives of the Papuans for several months to know what they want," he added.Father John Djonga, a human rights advocate, said Aug. 1 that he appreciated the Catholic students' concerns about Papua. But he also reminded students to build intensive communication with local Papuan leaders.Communication with local leaders, he said, is important because there is so much poverty and injustice in Papua that needs immediate attention.According to the priest, there have been efforts to have a dialogue mediated by third party, but the Indonesian government has not listened.This made the Papuans seek international attention regarding their struggle especially in the Pacific region, Father Djonga said.
——————————————————
http://jakartaglobe.beritasatu.com/news/indonesian-democracy-slightly-declines-2015-survey/
3) Indonesian Democracy Slightly Declines in 2015: Survey
By : Edo Karensa | on 6:29 PM August 03, 2016
Jakarta. Indonesia observed a decline in the state of its democracy, according to the Central Statistics Agency (BPS) which published a survey measuring the democracy index on Wednesday (03/08).
The 2015 Indonesia Democracy Index report showed a drop from the previous year's 73.04 to 72.82 points, where a top score of 100 indicates full democracy.
During the press briefing in Jakarta, BPS head Suryamin said that a decrease was noted in the civil liberties category, from 82.62 last year to 80.3, and in institutions of democracy, from 75.81 to 66.87.

In the political rights category which includes political participation and the right to elect and to be elected, Indonesia has improved from 63.72 last year to 70.63.
According to Suryamin, the slight decrease in the democracy index was mostly caused by the change of two indicators in the variable determining the role of local administrations. "Had last year's method been used, the index would stand at 73.12," he said.

The two irrelevant indicators were changed to new ones — local government's policies which were annulled by the court and local governments' efforts to provide budget information to the public.
Four Indonesian provinces which scored above 80 were in a "good" state of democracy, these are: Jakarta, Yogyakarta, East Kalimantan and North Kalimantan. Other 28 provinces stood as "moderate," while Papua and West Papua stepped down to "poor" due to the weak performance in the institutions of democracy category.
The survey data was collected from focus group discussions, in-depth interviews, media monitoring and examination of local regulations and policies.
—————————————————————
Posted by AWPA Sydney News at 1:49 PM