1) Tongan PM calls for solidarity on Papua ahead of Forum 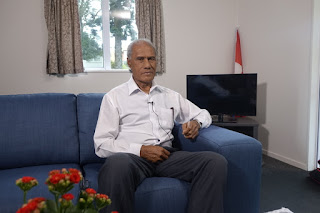 'Akilisi Pohiva the Prime Minister of Tonga Photo: Alex Perrottet / RNZ
The Tongan Prime Minister is calling on Pacific leaders to unite on a call for United Nations intervention in the Indonesian provinces of Papua and West Papua.
'Akilisi Pohiva told the UN General Assembly in New York last year that it should investigate allegations of human rights abuses against Indonesia and take action against "brutal and inhumane activities".
Now, ahead of the Pacific Islands Forum in the Federated States of Micronesia next month, Mr Pohiva is asking Pacific leaders not to shy away from taking a united stance.
I'll do exactly what I did in the last United Nations meeting. My concern is that I just want other nations, leaders in the Pacific to join me or to support my position in regard to the violation that occurred in the last 20 years or so in West Papua."
The Solomon Islands Prime Minister Manasseh Sogavare has also called for UN intervention.
——————————————————————
http://www.thejakartapost.com/news/2016/08/04/flights-to-jayapura-ternate-to-be-the-first-to-take-off-from-terminal-3.html
2) Flights to Jayapura, Ternate to be the first to take off from Terminal 3
Anton Hermansyah The Jakarta Post
Jakarta | Thu, August 4 2016 | 01:04 pm
State-owned airport operator Angkasa Pura II (AP II) is busying itself with final preparations for the start of operations at Terminal 3 by instructing all modes of public transportation to become familiar with the terminal.
Starting on August 9, the first day of Terminal 3 operation, all of PT Garuda Indonesia's domestic flights will be moved to Terminal 3. Two planes heading for Eastern Indonesia will be the first flights out of Terminal 3.
"We have GA-654 to Jayapura and GA-648 to Ternate. Both of them [are scheduled to] depart at 01:40," said Garuda service director Nicodemus Lampe, at a press conference at Terminal 3 in Tangerang, Banten, on Wednesday.
On August 8, a day before official operations begin at the new terminal, AP II will deploy 100 people to guide vehicles at intersections and the drop off area.
AP II president director ad interim Djoko Murjatmodjo said airport taxis and buses had been ordered to drive through Terminal 3 at least once a day starting Thursday, with or without passengers.
"This is part of a program to familiarize them with the pick-up and drop-off points," Djoko said. (ags)
——————————————
Posted by AWPA Sydney News at 2:01 PM