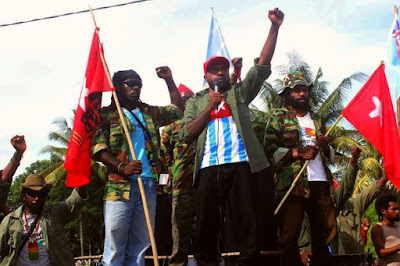 The West Papua National Committee chairman Victor Yeimo addresses a demonstration in Jayapura in April  Photo: Tabloid Jubi
The rally in Waena, a suburb of Jayapura, had been organised by the West Papua National Committee, or KNPB, to mark the 55th anniversary of the New York Agreement.
The US-brokered deal in 1962 between Indonesia and the Netherlands concerning the future administration of West New Guinea lacked consultation with West Papuans themselves.
It's one of the core grievances for West Papuans regarding the incorporation of the former Dutch New Guinea into Indonesia.
Around 50 KNPB activists were arrested for handing out leaflets informing people of yesterday's mobilisations in Jayapura.
The KNPB has been centrally involved in a series of large public demonstrations in cities across Papua region since April.
These demonstrations have voiced support for the United Liberation Movement for West Papua and international efforts to assist Papuan rights including self-determination.
Although peaceful, some of the demonstrations resulted in mass arrests, with one rally in Jayapura on 2 May alone resulting in around 2000 Papuans being taken in by police.
Watched over by the usual heavy presence of police and intelligence agents, Monday's rally, and a simultaneous demonstration in downtown Jayapura, heard from KNPB leaders, outlining West Papuan opposition to the New York Agreement.
"We Papuans claim that New York Agreement in 1962 is not valid and firmly reject because Indonesia did not enforce the right of self-determination (Self-determination) democratically," read a statement signed by the KNPB Central Chairman, Victor Yeimo. 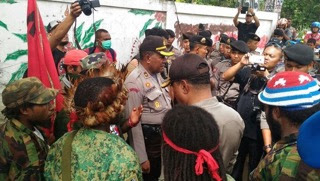 Indonesian police talk to members of the West Papua National Committee, or KNPB, in Jayapura during their demonstration, 31 May 2016. Photo: Tabloid Jubi
However while the Waena demo started off peacefully from the University of Cenderawasih zone, it later descended into unrest with a group allegedly burning tires, vandalising vendors' kiosks and causing other damages on Waena's main street.
Police forcibly dispersed the melee and, according to Indonesian media, arrested six demonstrators who were among the mob causing anarchy and fires.
The Antara News agency quoted police saying they arrested members of the KNPB.
However a West Papuan lawyer and Catholic lay activist, Frederika Korain, said the KNPB were wrongly blamed for the unrest.
"People know that already it is not done by the KNPB members," she said, "because they know that then people in the KNPB they have shown their peaceful movement already in the past four months now, in their big mass rallies."
A spokesperson for the KNPB has denied the organisation's involvement, saying he didn't know who the arsonists were.
Frederica Korain also said it was unclear who was responsible for the disorder at Waena. 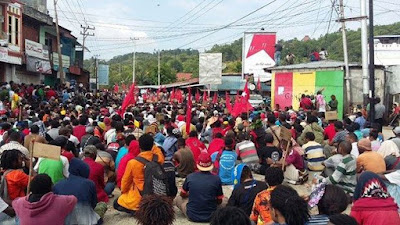 A large peaceful demonstration in Jayapura in support of the United Liberation Movement for West Papua. Photo: Tabloid Jubi
Reports emerging from some of the mass rallies in May and June in Papua described undercover militia groups cause havoc in response to otherwise peaceful public mobilisations.
Meanwhile two young women were hospitalised after yesterday's event in Waena.
One was assaulted by unknown assailants, while the other was shot by rubber bullets while fleeing the scene when police started pointing guns at people and firing into the air.
———————————————- 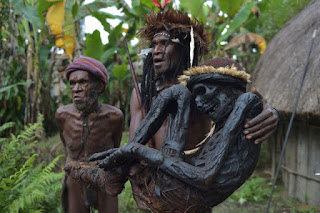 MUMMIFICATION. This photo taken on August 7, 2016 shows tribe chief Eli Mabel (C) holding the mummified remains of his ancestor, Agat Mamete Mabel, Agat Mamete Mabel, in the village of Wogi in Wamena, the long-isolated home of the Dani tribe high in the Papuan central highlands. Photo by Adek Berry/AFP
WAMENA, Indonesia – Cradling the centuries-old remains of his mummified ancestor, tribe leader Eli Mabel lays bare an ancient tradition that has all but vanished among the Dani people in the Papuan central highlands.
The tiny, blackened, shrunken figure he carries was Agat Mamete Mabel, the chieftain that ruled over this remote village in Indonesian Papua some 250 years ago.
Honored upon death with a custom reserved only for important elders and local heroes among the Dani people – he was embalmed and preserved with smoke and animal oil.
Nine generations on and his descendent Eli Mabel is the current chieftain in Wogi village – an isolated hamlet outside Wamena that can be reached only by hiking and canoe.
He said the exact age of Agat Mamete Mabel was not known, but told AFP this ancestor was the last of the village to receive such a funeral. Once common among his forebears, the ritual method of smoke embalming was no longer practiced, he explained.
Christian missionaries and Muslim preachers encouraged the tribespeople to bury the corpses, and the tradition has faded as the centuries drifted by.
But Mabel is determined to retain the ancient rites and rituals for future generations.
"We must protect our culture, including the ceremonies for the mummy, the way we treat it, and maintain and fire for it," the Dani tribesman told AFP.
The mummy, decorated with pig tusks slung around the torso, a feathered headpiece, and traditional penis gourd rests in a hut known as a "honai".
This wide domed, thatch-roofed hut is tended year round by a select few villagers who keep a fire burning to ensure the corpse remains dry and preserved.
The duty of caring for the mummy often falls to Mabel, he said. He spends many nights sleeping alone in the honai, ensuring no harm befalls his ancestor.
Eventually, the duty of caring for the mummy will be passed to others, he said. Mabel hopes his own children will bear some responsibility for keeping their customs alive, but worries they are far away.
"I have told them they must take care of the mummy at some point in their lives," Mabel said of his four children, some living in far-off provinces in Indonesia's more populated centers.
The ancient Dani tribes in Indonesia's half of the island of New Guinea were cut off from the outside world until well into the 20th century. Their homeland in the Baliem Valley was isolated by steep, rugged valleys and dense highland forest.
Today, the region remains one of the poorest in Indonesia. Many tribes rely on tourism, their unique customs, traditional dress and rituals attracting visitors to their remote villages. – Rappler.com
———————————————-
http://www.thejakartapost.com/news/2016/08/16/state-electricity-giant-pln-seeks-electrify-remote-papua-regions.html
3) State electricity giant PLN seeks to electrify remote Papua regions
Fedina S. Sundaryani The Jakarta Post
Jakarta | Tue, August 16 2016 | 08:51 am
State-owned electricity company PLN has plans to light up the often neglected provinces of Papua and West Papua by the end of next year.
The company is aiming to procure electricity for five regencies this year and nine regencies next year in order to fulfil the government’s target of a 97 percent national electrification ratio by 2019, up from the current ratio of 88.3 percent.
Currently, Papua’s electrification ratio only reaches 45.93 percent while West Papua’s is 82.7 percent, both much lower than the current national average.
PLN regional director for Maluku and Papua, Haryanto, announced on Monday that diesel-fueled power plants in three regencies in Papua — Raja Ampat, Arfak and Teluk Wondama — would start operating on Wednesday as part of the country’s 71st Independence Day commemorations, with a total electricity capacity of 12,047 kilowatts (kW).
Meanwhile, the remaining regencies set to be lit up this year will start operating in October with a total 3,520 kW.
Haryanto said efforts to procure electricity for one of the country’s most remote regions had stalled due to high fees and a lack of infrastructure. However, PLN decided to start developing the regencies due to the enthusiasm shown by the administrations and locals.
“One of the biggest challenges to procure electricity for Papua and West Papua includes the geographical conditions, which encompasses mountains and forests. Furthermore, there is limited transportation infrastructure, which has led to high operating costs and fuel transportation fees per kilowatt hour [kWh],” he said during a press briefing on Monday.
Prior to PLN entering the regencies, electricity was independently managed by individual administrations. PLN plans to take over the operation of existing diesel-fueled and solar power plants and also develop new power plants and transmissions in order to boost Papua and West Papua’s electrification ratio to 75 percent by the end of 2019.
By the end of 2017, the 14 regencies are expected to have a total electricity capacity of 14,110 kW. The project will need a total investment of Rp 156.02 billion (US$11.9 million) and annual operating fees of Rp 191.9 billion.
The project is expected to allow 277 villages to gain access to electricity, leading to an exponential increase of 15,795 PLN electricity subscribers.
Haryanto explained that the plan to procure electricity for the 14 regencies was separate to the government-sponsored 35,000 megawatt (MW) project and the Indonesia Terang (Bright Indonesia) project, the latter of which also intends to procure electricity for remote villages across the nation through renewable energy sources.
“However, we continue to work together and compare notes with the Energy and Mineral Resources Ministry’s new and renewable energy so that our projects don’t clash,” he said.
In the government’s ambitious 35,000 MW project, PLN and independent power producers (IPP) are expected to develop power plants with a total electricity capacity of 580 MW in 33 locations in Papua and West Papua.
Furthermore, PLN still has several projects in both provinces from the FTP phase one and phase two programs, worth up to 68 MW in three locations.
----------------
Posted by AWPA Sydney News at 3:02 PM