1) West Papuan refugees in the Papua New Guinea capital Port Moresby have expressed gratitude at being given land for resettlement.

2) NZ elaborates on ambassador’s Papua trip
3) Massive clashes in remote Papua leave men dead, many wounded
———————————————————————-
http://www.radionz.co.nz/international/pacific-news/309894/west-papuans-in-png-grateful-for-land-allocationsWest Papuans in PNG grateful for land allocations
3:23 pm today
1) West Papuan refugees in the Papua New Guinea capital Port Moresby have expressed gratitude at being given land for resettlement.
More than a thousand West Papuans, some of whom have been in the country for more than 30 years, squat on land in the Rainbow settlement as well as in Hola and Wigan within Port Moresby. 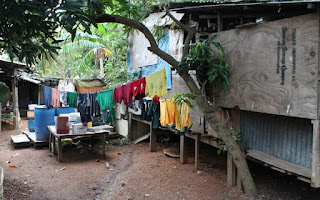 Many of them were either in the courts over the legality of their areas of residence while others had been issued notices for eviction.
A construction officer with the West Papuan Relief Association said the community's spirits had been lifted by the National Capital District Commission's allocation of 10 hectares in the Red Hills suburb of Gerehu.
Arnold Amba said the community was already clearing the land and fundraising for its development.
Mr Amba said getting some 200 families resettled would be an even bigger challenge.
"I want to message to the international organisations like UNHCR, the International Organisation for Migration and Foreign Affairs to to help us to support our program to occupy the new land. So we need help to move in on the new land."
An estimated 12,000 unregistered West Papuan refugees live scattered across PNG and a government programme to register and provide citizenship for these people was currently underway, although some critics said it would take more than citizenship to address the issues faced by West Papuans living in PNG.
——————————————————————————————-

2) NZ elaborates on ambassador’s Papua trip
Concerns about freedom of expression and assembly were raised by New Zealand’s ambassador to Indonesia in his recent visit to West Papua.

12:16 pm today
Trevor Matheson was among several regional ambassadors to visit Papua region in June at the invitation of Indonesia's Co-ordinating Minister for Political, Legal and Security Affairs, Luhut Panjaitan.
Ambassadors from Papua New Guinea, Solomon Islands and Fiji also took part in the visit.
Although the PNG Ambassador Peter Ilau was forthcoming about his trip, little information has been made available so far from the New Zealand government about Mr Matheson's visit.
However, Wellington has now elaborated slightly on the trip.
A New Zealand Foreign Affairs ministry statement said the visit provided the ambassador the opportunity to observe Jakarta's approach to addressing human rights and development challenges in Papua.
Recently, Indonesia's Commission for the Disappeared and Victims of Violence, or KONTRAS, said rights abuses in Papua remained rampant.
KONTRAS' co-ordinator Haris Azhar said that in the past year his office had over 1,200 reports of rights abuses in Papua - mainly abuses by security forces against Papuans for exercising their right to freedom of expression, freedom of assembly and movement.
As well as freedom of expression and assembly, political prisoners and access for foreign media to Papua were areas of concern raised by Ambassador Matheson, according to the ministry.
The ministry however would not divulge on Indonesia's response, citing sensitivities around the relationship between the two governments.
It said that New Zealand followed developments in Papua closely, and welcomed the opportunity to engage with all stakeholders on Papua-related issues, including central and local government actors, civil society and independence advocates.
Two weeks ago, New Zealand's prime minister John Key discussed Papua with Indonesia's government in Jakarta during his state visit.
Mr Key said Indonesia's President Joko Widodo and his officials raised the issue of human rights and West Papua before he did.
"They did raise the point quite specifically about human rights and said, look, if there are specific issues with human rights, then they take up the issues, they investigate them and they make sure that they are not repeated.
He indicated that President Widodo and his officials have been fostering more openness about the situation in Papua in a bid to create “greater understanding".
—————————————————————-
http://www.radionz.co.nz/international/pacific-news/309901/massive-clashes-in-remote-papua-leave-men-dead,-many-wounded
3) Massive clashes in remote Papua leave men dead, many wounded
4:58 pm today
Clashes in the remote Papua province of Indonesia on the weekend have left three people killed and dozens injured, along with 25 houses burned down.
Police said scores of vehicles were also set alight, as ethnic violence drove hundreds of people to evacuate Timika for the provincial capital, Jayapura.
353 people were staying in the Toli dormitory in Sentani, according to the Jakarta Post.
Joni Wonda, who was coordinating the evacuees, said many others wanted to leave Timika but couldn't get flights.
Mira Kogoya, a 25-year-old evacuee, told the paper the clash went beyond customary rules, with attackers killing everything they found in the street, such as pigs and dogs.
She said they also burned houses, attacked women and children and raped and killed people.
Members of both the military and the police were put on guard in Kwamki Narama district.
The Indonesian Embassy based in Wellington, New Zealand, reported two men were dead.
The embassy said the clash occurred in Ileale Village, between followers of Hosea Ongomang, of the Amungme/Damal tribe and followers of Genius Kogoya and Thomas Kum, of the Dani tribe.
-----------------------------
Posted by AWPA Sydney News at 12:36 AM