2) Family: Mikael Merani was unarmed when shot
3) Solomon Islands police to partner with Indonesia
4) Over 150 rebels surrender to Indonesian government in Papua
————————————————

Jayapura, Papua (ANTARA News) - Police have shot dead an armed law fugitive on the island of Yapen, Papua, after resisting arrest.Maikel Marani, leader of a gang of armed criminals was killed after exchanges of fires in the village of Konti Unai in Yapen, Papua on Monday morning, police spokesman sr. comm Ahmad Kamal said by phone here. Police came to pick up Maikel Marani from his hidden place in the house of his parent in law."Maikel resisted and police have to shoot him," he said, adding, Maikel has been in the police list of "wanted men". Police found an old weapon and ammunition and the Bintang Kejora flag of the Papua separatists .Papua is still a hot spot for Indonesia with separatist rebels hiding in the mountain jungles of the countrys easternmost and backward province.(*)
—————————————
A google translate. Be-aware google translate can be a but erratic.
Original bahasa link at
http://tabloidjubi.com/artikel-4906-keluarga--mikael-merani-tidak-bersenjata-saat-ditembak.html
Senin, 27 Maret 2017 — 21:00
2) Family: Mikael Merani was unarmed when shot
Jubi | News Portal Papua No. 1,
Jayapura, Jubi - Monday (3/27/2017) morning, around 01:00 local time, Mikael Merani, a resident of Kampung Kontinuai, Angkaisera District, Yapen island district was shot dead by police officers Police Yapen. Mikael dead in-law's house.
Head of Public Relations (Head of Public Relations) Papua Regional Police, Police Commissioner Ahmad Kamal acknowledged the shooting. Mikael named by police as a group leader who is often called an armed criminal (KKB). Area of ​​operations in the northern coastal region (north coast) and Yawakukat, Yapen Islands. Mikael is also mentioned on the wanted list (DPO) of the police.
"Had a clash in Konti Unai killing led KKB Maikel Marani," said Head of Public Relations quoted by Antara news agency.
This clash led Yapen Islands Police Chief Adjunct Senior Commissioner Suwandito Darma.
The police claimed to successfully mengamanankan evidence of the long-barreled senpi shoots types SS1, SS1 nine magazine, bayonet, vests, the Morning Star flag, 13 rounds of ammunition, a revolver, 10 rounds of ammunition caliber 5,56,229 rubber granules, 5.56 caliber ammunition, one bud wind guns and some money in the incident.
However, this statement is contradicted by the victim's family. According to the victim's family's initials MM-though circulated photographs holding a gun when his brother's body had fallen tertembak- brother was unarmed when the incident happened.
"Mikael is DPO. He was not armed when shot. He was at home in-law, were rounded up in the house, were taken out and shot. Cooking he kept weapons and other items in-law's house? "Said MM.
MM said, Mikael become DPO since three years ago for allegedly killing a policeman. However, the allegations could not be proven.
"During the DPO, he lived in Kontinuai. Why not arrested? He did not go anywhere, "said MM.
MM suspect, this has to do with the shooting of a conflict elections are taking place in Yapen.
"It was no conflict elections. There is already a victim of society. Yesterday also KPU office on fire. I suspect this has something to do with the conflict elections, "said MM. (*)
——————————————
http://www.radionz.co.nz/international/pacific-news/327581/solomon-islands-police-to-partner-with-indonesia
3) Solomon Islands police to partner with Indonesia
3:43 pm on 27 March 2017
According to the police minister of Solomon Islands, the country's police force is looking to enter a co-operation agreement with the Indonesian National Police.
Peter Shanel and other police ministers of Melanesian Spearhead Group member countries had a conference in Jakarta this month, following meetings of MSG police commissioners. 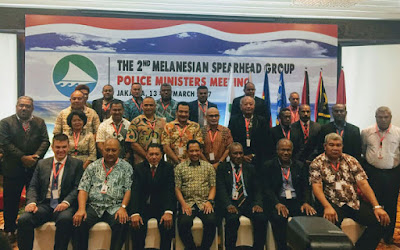 Melanesian Spearhead Group police ministers and police commissioners meeting in Jakarta, March 2017 Photo: Supplied
Mr Shanel told the Solomon Star that a draft Memorandum of Understanding between the Royal Solomon Islands Police Force and the Indonesian National Police was expected to be signed soon.
The draft MoU was focused on co-operation to prevent and combat transnational crimes and building international police capacity.
Mr Shanel signalled it would be timely for his country's police force, given that the Australian-led Regional Assistance Mission to Solomon Islands draws down its operations in July.
He said the Indonesian police will go back to their Foreign Ministry for approval before the signing will take place.
The Solomon Islands Police Commissioner Matthew Varley chaired the MSG Police Commissioners' Conference in Jakarta.
He said the meeting was good for Solomon Islands to "again demonstrate how important it is to co-operate on the international stage".
He said he met with counterparts from Papua New Guinea, Fiji and Indonesia.
“We had meetings with those senior officers but were also able to discuss how we might speed up co-operation across the region on transnational crime, drugs, trafficking and things like terrorism as well as smuggling."
Melanesian Spearhead Group police ministers and police commissioners being feted in Jakarta. Photo: Supplied
He also said that part of the MOU that Solomons would negotiate with the Indonesian National Police would focus on how the two countries could exchange and swap intelligence and expertises.
Mr Varley said Indonesia had over the past 15 years been at the forefront of counter-terrorism in the South Pacific region.
"And indeed they have a lot of expertises in identifying and investigating terrorism and although we are safe here in Solomon Islands at the moment from that we still have a lot to learn from our friends in Indonesia and around MSG.
"I think we can benefit from their expertise," Mr Varley said.
He said these MoUs give them the flexibility to exchange intelligence on a particular group of terrorist or a particular crime type.
"It is not in any way giving permission for any other country to send police officers here to do operation policing business," Mr Varley explained.
The prime minister of Solomon Islands, Manasseh Sogavare, is yet to confirm the move to sign a MoU with Indonesia over police co-operation.
A release from his office on Friday said the meeting of MSG police heads agreed on the formation of a Working Group to develop a Regional Security Strategy.
Melanesian Spearhead Group police ministers and police commissioners pose for a photograph, surrounded by Indonesian police. Photo: Supplied
"This is in acknowledgement of the ever changing security landscape in the MSG region and the understanding that crime is the common enemy to police and law enforcement institutions in a 'borderless' environment.
“The meeting also acknowledged that in order to effectively address crime, policing has to be separated from politics to ensure policing activities operate in an 'unrestricted environment'."
————————————————
Note. It would appear from information received that the below story was a set up by the authorities and they were not OPM at all.
Not unusual for similiar stories once or twice a year.
——————
http://www.globaltimes.cn/content/1039426.shtml
4) Over 150 rebels surrender to Indonesian government in Papua
Source:Xinhua Published: 2017/3/24 20:39:57
A total of 154 guerrilla fighters in Papua province have surrendered to the Indonesian government, the Indonesian army said in a statement on Friday. The fighters were members of the Free Papua Movement which has long engaged in rebellion and sought diplomatic ways to separate from Indonesia. The surrender happened following a humanitarian approach undertaken by the Indonesia army. "Finally, the humanitarian approach has successfully led 154 members of the Free Papua Movement give up their insurgency," the statement said. In a ceremony in Puncak district, head of the district Wilem Wandik handed Indonesia's red-and-white flag to a representative of the rebels as a symbol of their return, it said. President Joko Widodo's administration has been trying to create equality in development across the archipelago country, including creating a uniform price for fuel and cement, building toll roads in Papua province to help spur economic growth. The Free Papua Movement frequently targeted civilians, soldiers and staff of a US mining company in the province, leaving dozens of casualties.
Posted in: ASIA-PACIFIC
——————————-
Posted by AWPA Sydney News at 12:59 PM