1) Papuan pawns
In the March edition of Islands Business Magazine 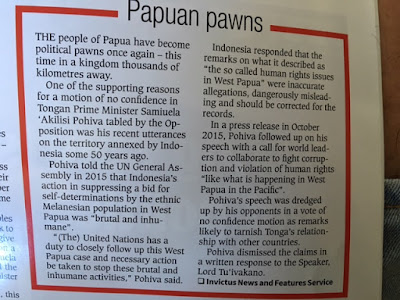 ————————————————
http://www.nzherald.co.nz/entertainment/news/article.cfm?c_id=1501119&objectid=11825021
2) First novel tells it gracefully like it is
By Dionne Christian , Dionne Christian
5:00 AM Saturday Mar 25, 2017
When young writer Bonnie Etherington showed one of her Massey University classmates a short story she'd written, the last thing she expected was to be told she was seriously disturbed and in need of help.
Etherington, now 27 but back then just 18, had written about a plane crash and described, matter-of-factly, what happens when a body decomposes in the jungle. Having spent her formative years in West Papua, Indonesia, she was simply telling it like it was. Or is.
She says death is all around in a developing nation where there's extremely limited access to clean water and basic sanitation, reliable food supplies, medicines and health services, structurally sound housing and, indeed, all the other municipal services we take for granted.
Etherington talks straightforwardly about having nothing but green beans to eat for days or watching as her mother, Pip, a nurse, cut gangrene away from the leg of a woman who'd rolled into a fire while sleeping one night.
"Burns are quite common and often go untreated so gangrene becomes a massive problem. Mum was cutting it away from this woman's leg and putting it into a bowl. Later, Dad washed the bowl out and put peanuts in it. We were traumatised to learn we'd been eating peanuts out of the gangrene bowl. "
Given the abundance of material, it's no surprise that Etherington, already an accomplished short story and award-winning travel writer, draws on childhood experiences in West Papua for her first novel.
The Earth Cries Out is about a Nelson family struggling with grief and guilt following a tragedy. To heal and atone, 8-year-old Ruth's father moves his family to Irian Jaya (the Indonesian province now known as West Papua) to build a hospital in a remote mountain village. Her dad's distracted and her mum doesn't want to be there so Ruth does what all children do and tries to adapt and make friends.
Etherington says the family is nothing like her own. Born in New Zealand, she moved with her mum, dad Paul, and sisters to Bandung, Java when she was 2 then on to West Papua. Every three or so years, her family would return to New Zealand for an extended stay of up to six months to rest and recuperate. They once lived in Darwin for three years when Pip got so sick that they needed a longer break.

Culture shock was as much a feature of Etherington's childhood as bouts of malaria or dengue fever. Her primary schooling was patchy; intermediate constant and secondary schooling at an international school of Papua's coast, where she met her husband, Josh Eastwood.
Although the family is different from Etherington's own the poverty, unrest and death shot through the book are real. But it's not a grisly story - if anything, it's more visceral because of her understated but graceful style. Ruth's story is told sensitively and alternates with vignettes about Papua's flora and fauna.
Each is organised around a specific plant, such as an orchid or a breadfruit tree, accompanied by a short story. It's a skilful way of including information about the region's politics, history and peoples without putting far too grown-up words and thoughts into Ruth's mouth and brain.
The book's title comes from Romans 8:22: "We know that everything on the earth cries out with pain the same as a woman giving birth to a child." Acutely interested in environmental issues, Etherington says the novel is partly about relationships between women, especially mothers and their daughters, and the shades of loss and pain as well as love that can colour those relationships.
"I wanted to combine these themes and show that even through pain, there is hope. The novel also suggests that the earth itself, our environment, can feel and express pain."
West Papua has been occupied by Indonesia since the 1960s.
"It's our neighbour and we really should be more aware of it and it's not enough to know about where it is but we should be aware of what life is like there. The vignettes were my way of trying to get more stories of West Papua's people in, to show the multiplicities and go beyond the usual narratives of primitivism and cannibalism we usually read, because it's not like that at all."
Short-listed for the Commonwealth Short Story Prize in 2016, Etherington studied for a Master of Creative Writing at Massey University in Palmerston North. She credits senior lecturer and fellow author Dr Thom Conroy for encouraging her to include the vignettes about West Papua in the story.
Like most of her stories, The Earth Cries Out started when a character - in this case, Ruth - came to mind and wouldn't leave, but originally Etherington didn't plan to include as much about West Papua.
"I wanted to be a New Zealand writer so I thought I would have to have the story set mainly in New Zealand which, I suppose, was a bit ignorant of me. Thom Conroy encouraged me to keep those chapters. He said the story really came alive in West Papua."
Etherington is now Chicago-based, working towards a PhD at Northwestern University, focusing on tropical ecologies in Southeast Asian and Oceania literatures. She regards both New Zealand and West Papua as home but is reluctant to go into too much detail about the latter's political situation.
"I support dignity and justice for the people of West Papua and their lands. How that should best come about is not my place to say. It is the place of Papuans to say, whether that takes the shape of full political autonomy from Indonesia or some other configuration of reconciliation and reparations. I hope that their voices will be heard and respected."
The Earth Cries Outby Bonnie Etherington(Vintage, $38)
- NZ Herald
Posted by AWPA Sydney News at 12:09 AM