By Pacific affairs reporter Liam Fox Posted about 9 hours ago 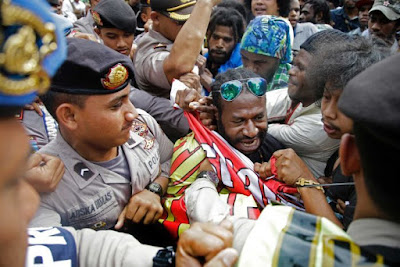 PHOTO: Indonesian security forces have been accused of beating and killing West Papuan activists. (AP: Dita Alangkara, file)
A group of seven Pacific island nations is calling on the United Nations to investigate allegations of widespread human rights abuses in Indonesia's Papua region, also known as West Papua.
Vanuatu’s Justice Minister Ronald Warsal made the request to a session of the UN Human Rights Council in Geneva, and spoke on behalf of his
own country as well as Tonga, Nauru, Palau, Tuvalu, the Marshall Islands and Solomon Islands.
Mr Warsal said various UN bodies and representatives had raised concerns about serious human rights violations committed by Indonesian security forces, including extrajudicial executions and beatings of West Papuan activists.
"To date the Government of Indonesia has not been able to curtail or halt these various and widespread violations, he said.

"Neither has that Government been able to deliver justice for the victims. Nor has there been any noticeable action to address these violations by the Indonesian Government."

Mr Warsal called on the Human Rights Council to request the High Commissioner for Human Rights to "produce a consolidated report on the actual situation in West Papua".
"The report must make recommendations for immediate action to halt the pattern of human rights violations," he said.
Indonesia rejected the allegations of widespread, ongoing human rights violations in West Papua.
"The Indonesian Government has always endeavoured to address any allegation of human rights violation as well as taking preventative measures and delivering justice," an Indonesian Government representative told the Human Rights Council.
West Papua, a former Dutch colony, became part of Indonesia after a UN-supervised referendum in 1969 that involved only a small segment of the indigenous Melanesian population.
There is strong support among many Pacific island nations for West Papuan activists who want another referendum to be held.
——————————————

Timika, Papua (ANTARA News) - Bank Pembangunan Daerah Papua (Bank Papua) has since February 20 rejected new credit proposal from the workers of Freeport Indonesia and its affiliates. The decision is temporarily until Freeport reached an agreement with the government and resume normal operation, said Joko Suparyono, acting chief of the Timika branch of Bank Papua, which is owned by the provincial administration."If Freeport has resumed normal operation credits would be available again for the workers of the company and its affiliates," Joko said here on Thursday. Freeport, which operates the countrys largest copper and gold mines in Papua, have been in disagreement over new status of contract and a number of contract terms.Freeport, a subsidiary of U.S. mining giant Freeport-McMoRan has threatened to bring the case to an international arbitrary court and the government said it was ready to meet the challenge.  The American mining company has brought the worlds biggest gold mine, to a standstill. And now that Freeport has started to dismiss tens of thousands of workers, the local economy is poised to take a huge hit. In Mimika Regency, the West Papua province containing the Grasberg gold mine, 91 percent of the Gross Domestic Product (GDP) is attributed to Freeport.Freeport Indonesia abruptly stopped production on February 10 and laid off 10 percent of its foreign workers. It employs 32,000 people in Indonesia, about 12,000 of whom are full-time employees. The freeze was a reaction to a shakeup in Freeport's 30-year contract with the Indonesian government, signed in 1991. Indonesia has tried to levy additional obligations from Freeport in an attempt to increase domestic revenue from its natural resources. Joko said the bank policy is temporary but based on the position taken by both sides it might take a long time before an agreement is reached between the government and Freeport. He said around 3,000 workers of Freeport have accounts in Bank Papua. Bank Papua has provided credits for the workers of PT Freeport and its affiliates like PT Kuala Pelabuhan Indonesia (KPI), Puncak Jaya Power (PJP), Rimba Papua Hotel (RPH), etc. Joko said he had no report about how many workers of Freeport laid off or suspended having debts in credit provided by the bank. "Until February it was normal. The workers still received the salaries , but we would not know what would happen next," he said.(*)
——————————————————
https://newint.org/blog/2017/03/02/pacific-coalition-for-west-papua-addresses-human-rights-council/
3) Pacific Coalition for West Papua addresses UN Human Rights Council
By Kate Gething-Lewis and Andrew Butler
Pressure mounts on Indonesia as pacific nations bring grave abuses in West Papua to UN and support calls for self-determination. Kate Gething-Lewis and Andrew Butler report.
On 1st March 2017, the Vanuatu Minister of Justice, Ronald K Warsal, addressed the Council on behalf of seven Pacific nations. He began his address saying:
‘Today, I am speaking on behalf of both Vanuatu and six other nations of our Pacific region: Tonga, Nauru, Palau, Tuvalu, the Marshall Islands, and the Solomon Islands Mr. President, we seven have come together today – and in a separate written joint statement – in order to draw the attention of the distinguished members of the UN Human Rights Council to the grave situation in West Papua.’
Warsal went on to draw attention to accounts of Indonesian state violence in West Papua, including: ‘killings and arrests of Papuans; extrajudicial executions of activists; the arrests, beatings and fatal shootings of peaceful demonstrators, including high school students; and reports of persistent violence against Papuan women.’
Noting the failure of the Indonesian government to curtail these and other abuses, he called on the UN Human Rights Council to ‘request the High Commissioner for Human Rights to produce a consolidated report on the actual situation in West Papua.’ He stated that the report should ‘detail the various rights under the International Bill of Human Rights and the related conventions, including the right to self-determination,’ something the West Papuan people have been striving for since 1963.
Reacting to the statement, Benny Wenda of the United Liberation Movement for West Papua, who was in attendance in Geneva, said: ‘This is a historical moment for West Papua, as it is the first time in West Papuan history that we are represented at the Human Rights Council, at this level. On behalf of the people of West Papua, we extend our profound gratitude to the Solomon Islands, Vanuatu and the Pacific nations for your true leadership. For more than 50 years West Papua has been kept a secret. The time is now to request the UN revisit our case. The time is now for West Papua’s struggle to come to an end. We ask for all brothers and sisters across the Pacific, Africa, and around the world to please support West Papua’s legal right to self-determination. We want to be free.’
In the next stage of the campaign, six young swimmers will embark on a 69 kilometre journey up the length of Lake Geneva in August. They will carry with them a petition (which was launched in Westminster by Lord Harries of Pentregarth, Andrew Smith MP & Human rights activist Peter Tatchell) demanding an internationally supervised vote for the people of West Papua.
So far 20,000 people have signed the petition on the Avaaz website, and reports of Avaaz being banned in Indonesia are currently being investigated.
More information:
Find the Avaaz petition here (please sign and share). You can follow the #BacktheSwim campaign here.
We would like to thank the members of the Pacific Coalition for their continued support for the rights of the people of West Papua, including their right to self-determination.
#LetWestPapuaVote
Support has come in from around West Papua to thank the leaders of the Pacific Coalition for their continued support.
Today at the offices of the KNPB, Timika, West Papua. People prayed to give full support and thanks to the Pacific coalition for West Papua at the UN in Geneva.
Kate Gething-Lewis and Andrew Butler are members of the Free West Papua Campaign.
———————