2) US ambassador encourages open communication between government and Freeport

Jayapura (ANTARA News) - The government of Papua Province is committed to halt violence based on gender discrimination by issuing a Special Regional Regulation No.1/2011 and Province Regulation No.8/2013, Governor Lukas Enembe said here on Tuesday."Both rulings assure rights of the survivors as well as protect the victims of domestic violence," Enembe stated while adding that the Governor Regulation No.48/2015 had been issued to guide the activities of women empowerment and child protection bureau of the province.According to Enembe, all parties should ensure the regulation is obeyed by people to avoid crimes."Everyone, including the government as well as civil society, needs to oversee the implementation of the laws in order to stop crimes," Enembe pointed out.A strong awareness and commitment are important to prevent sexual assault against women and children, the governor remarked."As the number of the crimes tends to grow, it becomes a major threat to the citizens," Enembe added.The governor stated that the authority needs to proactively crack down on perpetrators and maximize protection for the victims.According to an annual report from The National Commission on Violence against Women, at least 16,217 cases of gender assault across the country were recorded in 2015.In last year alone, around 2 thousand children in Papua and West Papua provinces suffered from the violence, an official from Papuas Prosecutor Office Harli Siregar said in Jan.Siregar added that the cases have been investigated and submitted to the court by provinces prosecutor.Reported by Hendrina Dian Kandipi(UU.KR-GNT/KR-BSR/S012/B019/
———————————————————-
http://www.antaranews.com/en/news/109809/us-ambassador-encourages-open-communication-between-government-and-freeport

2) US ambassador encourages open communication between government and Freeport

Jayapura, Papua (ANTARA News) - US Ambassador to Indonesia Joseph R Donovan Jr has encouraged an open communication between the Indonesian government and Freeport McMoRan Inc."The open communication is intended to achieve an agreement that is advantageous to both the parties," Donovan said here on Tuesday. He stated that the shared communication could be a win-win solution."We agree on a win-win solution, because it will give a positive signal to foreign investors in the future. The solution also indicates Indonesias competitiveness at the global level." he remarked.The ambassador will continue to monitor the controversy over a change in the contract status of gold and copper mining firm PT Freeport Indonesia (PFTI).Under the government regulation 1/2017 on mineral and coal mining, the government would extend the export of concentrate on conditions that contract of work (CoW) holders must change their licenses into mining business permits (IUP) and special mining business permits (IUPK) and agree to build smelters within five years.In addition, the company would have to follow a prevailing tax system and divest up to 51 percent of its shares.Following this, President and CEO of US mining giant Freeport McMoRan, Richard C. Adkerson, earlier said that the company would take the Indonesian government to arbitration over the absence of a solution to the contractual dispute.Adkerson told the press here on Monday that PTFI has sent a notification on Friday to Energy and Mineral Resource Minister Ignatius Jonan on the governments defaults and violation of the firms CoW.The government cannot change the CoW signed in 1991 unilaterally by allowing exports only after it changed its status as IUPK, he noted."The letter stated that the Indonesian government and Freeport have 120 days to settle the disputes. At the end of that period, if the disputes are not resolved, then we reserve the right at that time to commence arbitration," he noted.He admitted that the company has continued to negotiate with the government regarding the contract security, as it would need legal and fiscal certainty to invest in Indonesia.Adkerson stated that since Jan 12, the company could not meet contractual obligations for copper concentrate shipments from the mine, following a five-week export stoppage."We have sent two ships to Gresik after the last export permit, but we could not export the concentrate due to workers strike. We have stopped operations for 10 days, because there was no place to store the concentrate," he remarked, adding that the parent company had not received dividends from PTFI for the past five years.(*)
——————————————————————
http://www.radionz.co.nz/international/pacific-news/326081/indonesia,-png-border-complex-complete
3) Indonesia, PNG border complex complete
9:00 pm on 7 March 2017
Indonesia has completed construction of a new administration complex in Skouw on the border with Papua New Guinea.
The National reports the complex will soon be opened by the Indonesian President Joko Widodo.
The Indonesian vice-consul to PNG, Abraham Lebelauw, says the border complex has the strategic purpose of increasing the movement of people and trade between both countries.
Mr Lebelauw says Indonesia sees the border region as having the potential to become an economic engine room of the future.
The Indonesian construction company Karya Ninda says the Skouw border development master plan includes the construction of a township for border officers and their families.
———————————————————————
http://www.thejakartapost.com/seasia/2017/03/07/we-dont-need-australias-charity-east-nusa-tenggara-fishermen-say.html
4) We don’t need Australia’s charity, East Nusa Tenggara fishermen say
Djemi Amnifu The Jakarta Post
Kupang, East Nusa Tenggara | Tue, March 7, 2017 | 06:14 pm
An advocacy group claiming to represent 13,000 fishermen and seaweed farmers from East Nusa Tenggara has lambasted an Australia proposal to provide financial assistance in connection with an oil spill that devastated the livelihoods of fishermen and farmers in 2009.
"We don’t need charity. What we need is cooperation involving local fishermen to identify the overall losses sustained by local people and the victims, especially fishermen and farmers, who suffered from the environment degradation in the seas of Timor and Sawu,” Montara Victim Advocacy Team head Ferdi Tanoni said in East Nusa Tenggara’s provincial capital of Kupang on Tuesday. 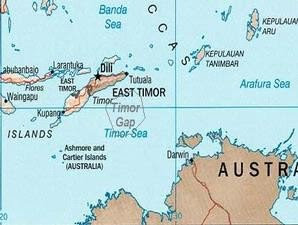 A map shows the territorial water between Australia and Indonesia near East Timor, where oil spilled from rigs operated by an Australian company in the Montara oil field in 2009.(kompas.com/-)
Ferdi was referring to comments from Coordinating Maritime Affairs Minister Luhut Binsar Pandjaitan and Australian Foreign Minister Julie Bishop after a meeting in Jakarta on Monday. Bishop was in Jakarta also to attend the 2017 Indian Ocean Rim Association (IORA) Summit.
“I hope that, as a good partner, Australia can help the victims,” Luhut said, as quoted in a statement from the ministry. Bishop responded by reiterating Australia’s commitment to provide assistance in relation to the case.
(Read also: East Nusa Tenggara people urge Jokowi not to visit Australia)
The pressure group is also representing fishermen and farmers from the regencies of Rote Ndao and Kupang in a class action lawsuit in Sydney against PTTEP Australasia, a subsidiary of Thai state-owned oil company PTTEP.
“Almost 90 percent of Indonesian waters in the Timor sea are polluted. All the productive area has been contaminated,” Ferdi said. (bbs)
———————————
Posted by AWPA Sydney News at 11:19 AM