2) Indonesia urged to settle dispute amid Freeport workers’ outcry
3) Indonesia Wants Control of Freeport’s Grasberg Within Two Years
4) Freeport-McMoRan: New Twist At Grasberg
—————————————————————————————————-
http://www.theage.com.au/victoria/man-fined-500-for-west-papua-protest-at-indonesian-consulate-20170323-gv4oca.html
1) Man fined $500 for West Papua protest at Indonesian consulate
Jane Lee MARCH 23 2017 - 3:18PM
A man is refusing to pay a $500 fine for trespassing at an Indonesian consulate to protest against its presence in West Papua, saying Australia has sold him out.
Tyrone Gibb, 42, climbed the fence at the Indonesian consulate in Melbourne, and up to the building's first-floor balcony on January 6. He waved a separatist "Morning Star" flag for the Indonesian province of West Papua, which is banned in Indonesia.
Gibb pleaded guilty to trespassing on a protected property at the Melbourne Magistrates Court on Thursday.
He was arrested and charged after the Indonesian government criticised Australian authorities for not doing so, almost a month after the protest was filmed and distributed on Facebook.
———————————————————-
http://www.thejakartapost.com/news/2017/03/23/indonesia-urged-to-settle-dispute-amid-freeport-workers-outcry.html
2) Indonesia urged to settle dispute amid Freeport workers’ outcry
Jakarta | Thu, March 23, 2017 | 03:05 pm
Viriya P. Singgih The Jakarta Post 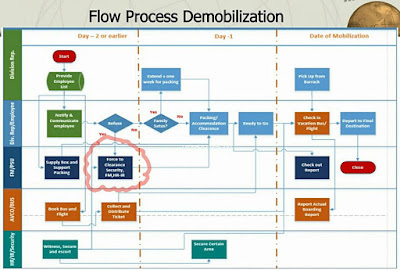 The demobilization process of workers of gold and copper miner PT Freeport Indonesia, a subsidiary of the United States-based mining giant Freeport McMoRan, that operates the Grasberg mine in Papua, the world's biggest gold mine and second-largest copper mine. (Courtesy of/The All Indonesia Labor Union’s (SPSI) local unit for PT Freeport Indonesia)
Gold and copper miner PT Freeport Indonesia (PTFI) employees have urged the government once again to immediately settle its dispute with the company as the number of laid-off workers has kept increasing from one day to another.
As of March 14, the company had laid off 2,102 contract workers, while giving long leave and offering voluntary resignation to 291 permanent staffers, according to the All Indonesia Labor Union’s (SPSI) local unit for PTFI, which represents around 12,000 PTFI workers.
The union also claims PTFI aims to dismiss 782 permanent staffers in the first phase of its efficiency measures.
“The company should discuss its efficiency measures together with the union so that both parties can reach a win-win solution,” Tri Puspital, an advocacy division member at the SPSI for PTFI, told The Jakarta Post on Wednesday.
(Read also: Era of selling natural resources has ended: Jokowi)
Hence, he called on PTFI to stop such measures, while urging the government to immediately settle the dispute with the company.
PTFI was banned from exporting its copper concentrates on Jan. 12, when the government fully imposed the mineral export ban, as initially mandated in the 2009 Mining Law.
Under the new policy, PTFI can only process its export permit if it shows a commitment to converting its contract of work (CoW) into a special mining license (IUPK), divests 51 percent of its shares to local entities and build a new smelter alone or together with other companies. (bbn)
—————————————————————
https://www.bloomberg.com/news/articles/2017-03-22/grasberg-dispute-deepens-as-indonesia-primes-miner-to-take-over
3) Indonesia Wants Control of Freeport’s Grasberg Within Two Years
by Yoga Rusmana  and Eko Listiyorini
23 March 2017, 1:39 am AEDT 23 March 2017, 10:41 am AEDT
The dispute engulfing the world’s second-biggest copper mine deepened as Indonesia’s government said it planned to take a majority stake in the local unit of owner Freeport-McMoRan Inc. within two years while workers at the pit threatened to go on strike.
The state enterprises ministry has cleared a government-run company to buy a majority stake in PT Freeport Indonesia, the local unit that runs the massive Grasberg mine in Papua province, according to Fajar Harry Sampurno, the deputy minister for mining, media and strategic industries. Freeport-McMoran would have to divest its share to a state-owned entity under a new contract that the Phoenix-based miner is yet to sign.
“We’re ready,” Sampurno said at a press conference in Jakarta on Wednesday. A local aluminum producer, PT Indonesia Asahan Aluminium, will be turned into a holding company to purchase the stake, he said. “Once the holding company is formed, they will immediately work on it.”
The preparations for state-ownership suggest Jakarta is refusing to budge in a dispute that’s curtailed mining at Grasberg and prompted Freeport to lay off thousands of workers. Under new rules announced in January, the government said companies that want to export semi-processed metals including copper concentrate must convert their contract of work to a special mining license, build smelters and add local investors. Freeport has refused to do so until it gets guarantees protecting its investment.

The rules stipulate foreign miners must begin selling shares to local entities five years after starting production and must reach 51 percent local ownership by the 10th year. Freeport must immediately divest its stake after converting its contract, because the firm has been mining in the country for more than a decade, Deputy Energy and Mineral Resources Minister Arcandra Tahar said in January. At present, Indonesia holds 9.36 percent of Freeport Indonesia.
A QuickTake explainer on rising economic nationalism in Indonesia
The government last month issued a special mining license, or IUPK, to Freeport, but the company vowed to hold out for investment safeguards that provide the same level of fiscal and legal certainty as its current contract of work. The miner served a notice to Indonesia’s energy ministry in February over the areas of dispute, and said it has the right to begin arbitration if they aren’t settled within 120 days.

Freeport Indonesia continues talks with the Indonesian government, spokesman Riza Pratama said by text message on Wednesday. A senior government official said in early March that the administration wanted to resolve the standoff in two weeks.
Last month, Freeport Chief Executive Officer Richard Adkerson outlined the company’s concerns, decrying both the process for converting the contract to a license as well as the divestment requirement. “These forms of regulations are in effect a form of expropriation of our assets, and we are resisting it aggressively,” he said at a conference.
Indonesia Asahan Aluminium, known as Inalum, will be turned into a mining holding company to purchase the stake in Freeport’s unit, according to a presentation by the state enterprises ministry on Wednesday. Local miners PT Aneka Tambang, PT Bukit Asam and PT Timah will become units of Inalum.
Aneka Tambang, the state-owned nickel miner known as Antam, is ready to participate in the Freeport purchase, according to President Director Tedy Badrujaman.
“Antam, because of its expertise, will probably be assigned to monitor mining operations at Grasberg, especially during the transition period, if the stake purchase went through,” Badrujaman told reporters in Jakarta on Wednesday.

The Grasberg labor union is adding pressure on both sides to resolve the dispute and resume mining that’s been reduced to about 10 percent of capacity and resulted in about 2,100 workers to be laid off.
Workers will protest in seven days if the government and Freeport fail to respond positively to demands outlined in a March 21 notice, Tri Puspital, the industrial relations officer at Freeport Indonesia’s labor union, said by phone.
The union wants the government to form a tripartite body to protect workers’ rights and find a resolution that ensures future operations at the mine, he said. Freeport should stop laying off workers, according to Puspital.
“Workers will protest with a rally, and won’t rule out the possibility of a strike if there’s still no response,” he said.
————————————
http://seekingalpha.com/article/4057470-freeport-mcmoran-new-twist-grasberg
4) Freeport-McMoRan: New Twist At Grasberg
Mar.23.17 | About: Freeport-McMoRan Inc. (FCX)
Vladimir Zernov  Long/short equity

The Indonesian government wants to take a majority stake in Freeport Indonesia in 2 years.
Papua administration also wants its piece of the pie.
Freeport-McMoRan should find a way to completely exit Indonesia with minimal damage.
The flow of news from Indonesia, where Freeport-McMoRan (NYSE:FCX) fights for its contractual rights with the local government, intensifies. This is typically a sign that we may hear some concrete information soon. Volatility in Freeport-McMoRan's shares may increase, providing opportunities for both longer-term investing and trading.
I previously covered this story, so in case you did not see it, you may find it useful to read previous articles (here and here) to learn more about the context. Without further ado, let's evaluate the recent news from Indonesia and what they might mean for the company and for the stock.
Bloomberg reported that the Indonesian government wanted to take a majority stake in Freeport Indonesia in two years. Preparations for this action have already begun by turning aluminium producer PT Indonesia Asahan Aluminium into a holding company.
At the same time, the administration of Papua, where Grasberg is situated, expressed its desire to get a 10% share of divested shares of Freeport Indonesia. Papua officials commented that Indonesian president "completely agreed with our stance on Freeport" and that Papua and Jakarta were fighting for the same thing.
As I previously commented, this time Indonesia is serious about getting its hands on Grasberg. In this light, all that Freeport-McMoRan can do is to maximize the value of its exit from Indonesia.
When the new part of the Indonesia story began, I was thinking that Freeport-McMoRan should find a way to minimize the damage and to continue operations at Grasberg. Now, it looks like the exit from Grasberg is almost inevitable and the only question is the price.
The reason for this is that Freeport-McMoRan cannot stay with a minority stake in the project as this will be a strategic suicide. The Indonesian government has already shown its inclination to change rules on the fly.
————————————————-