4:19 pm today
The United Liberation Movement for West Papua has cautiously welcomed news that Australia's Foreign Minister is to visit Indonesian-ruled Papua region this year.
Julie Bishop gave an undertaking to visit later this year, during talks in Jakarta this week with Indonesia’s government which has been touting a policy of openness about Papua.
This comes amid ongoing calls by Pacific Island governments for the United Nations to probe reports of widespread human rights abuses against West Papuans.
The matter is highly sensitive to Jakarta which opposes any outside interference in what it considers domestic affairs.
Last month, Australia's prime minister Malcom Turnbull reassured Indonesia's President Joko Widodo of Canberra's support for Indonesian sovereignty over Papua.
While Ms Bishop’s visit is not being described as a human rights fact-finding mission, the Liberation Movement says it is important that other governments find out more about the situation in Papua.
The Movement, which has observer status in the Melanesian Spearhead Group, urges Indonesia's government to allow Julie Bishop unfettered access to West Papuan community groups.
According to a spokesman for the Movement, a short and restricted visit to Papua by MSG Foreign Ministers in 2014 was evidence that Jakarta had so far failed to allow foreign governments open access to the region.
Indonesia is accused by the Movement of waging slow-motion genocide in Papua.
The West Papuan representative group cites evidence of simmering armed conflict, unrest, extra-judicial killings and jailings of Papuans, and marginalisation of their culture.
—————————————————————
http://www.thejakartapost.com/news/2017/03/08/alleged-rights-violations-weigh-on-freeports-shoulders.html
2) Alleged rights violations weigh on Freeport’s shoulders
Viriya P. Singgih The Jakarta Post
Jakarta | Wed, March 8, 2017 | 06:56 am
The cases against gold and copper miner PT Freeport Indonesia (FI) are piling as the national rights body has stated that the firm has violated the rights of indigenous people during its 50year operation in Papua.
According to an investigation carried out by the National Commission for Human Rights (Komnas HAM) from 2015 to 2017, FI has never paid compensation for the land it has been using as its working areas in Mimika, Papua, to its original owners — the indigenous Amungme people.
The commission claimed to have gone deep into various ministries, including the Energy and Mineral Resources Ministry, the Agrarian and Spatial Planning Ministry and the Environment and Forestry Ministry, during the investigation and called the Mimika administration and FI for questioning.
“We asked all of them whether or not there was proof of land transactions by Freeport Indonesia in the past. They weren’t able to present such evidence. Even the Agrarian and Spatial Planning Ministry said it knew nothing about it,” Komnas HAM commissioner Natalius Pigai said on Tuesday evening after handing over the investigation report to Energy and Mineral Resources Minister Ignasius Jonan.
(Read also: Workers urge government to settle dispute with Freeport)
The commission concludes that there have been violations on the rights of indigenous people, whose lands have been unilaterally seized by the Indonesian government and FI. It argued that there should be compensation for the people, whether in the form of money or shares of the company.
The Mimika administration in Papua has demanded 10 to 20 of percent shares in FI to compensate for the use of the land for the past 50 years.
FI, a subsidiary of United States-based mining giant Freeport-McMoRan Inc., was granted its first contract of work (CoW) in 1967 to operate the Ertsberg mine in Papua by the regime of former president Soeharto as the country tried to attract investments.
At that time, the Ertsberg mine was known as the richest copper deposit ever found on the ground with an estimated 13 million tons of ore reserves above the ground and 14 million tons of underground ore within a depth of 100 meters.
In 1991, FI’s contract was extended for 30 years following the company’s plan to further develop the Grasberg mine, located only two kilometers away from Ertsberg and eventually known as the world’s biggest gold mine and second-largest copper mine.
Mimika regent Eltinus Omaleng claims in his book, entitled Papua Asks for Shares, that at least 212,000 hectares of land have been seized from the Amungme people for the company’s operations.
He pointed to article 136 of the 2009 Mining Law, which requires mining license holders to settle all land disputes before starting their operations in related areas.
“The have been no compensation for 50 years. We don’t know whom it met, whether or not it has land certificate,” Eltinus said at the Energy and Mineral Resources Ministry on Tuesday.
Eltinus said the Mimika or Papua administration was ready to make a certain agreement with FI to allow the latter to pay for the shares in installments over a period of five years. The administration, he added, was also ready to waive its dividend rights during the installment period.
Responding to this matter, Energy and Mineral Resources deputy minister Arcandra Tahar said the government would try to resolve the entire case of FI by involving the indigenous people. FI’s latest CoW requires the firm to have sold 51 percent of its stake to Indonesian entities by 2011 or 45 percent if it has sold a minimum of 20 percent in the local stock market.
However, a string of regulations were issued along the way that eventually allowed FI to dodge the requirement until Ignasius reversed the course recently.
“We will talk about the details of the divestment process later. However, it should still be based on the existing regulations stipulating that the company’s shares would first be offered to the central government,” Arcandra said.
———————————————————-
http://jakartaglobe.id/international/australia-says-no-plan-joint-south-china-sea-patrols-indonesia/
3) Australia Says No Plan for Joint South China Sea Patrols With Indonesia 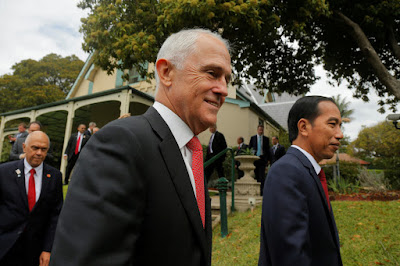 Indonesian President Joko Widodo, right, and Australian Prime Minister Malcolm Turnbull walk to their joint press conference in Sydney on Feb. 26, 2017. (Reuters Photo/Jason Reed)
By : Ben Weir and Cindy Silviana | on 1:22 PM March 07, 2017
Jakarta. Australian Prime Minister Malcolm Turnbull said on Tuesday (07/03) that his country aimed to work more closely with Indonesia over maritime security, but there was no plan for the neighbors to hold joint patrols in the South China Sea.
In an interview with the Australian newspaper last month, Indonesian President Joko Widodo said he would like to see joint patrols and intended to raise the idea with Turnbull, but only if it did not further inflame tensions with China.
"We are not going to undertake any actions which would increase tensions in the South China Sea," Turnbull said, when asked by a reporter whether Indonesia had raised the prospect of conducting joint patrols.
"Our commitment is to increase our cooperation with each other in terms of maritime security. So we talk about more collaboration, more coordination, but it has not been taken any further than that," Turnbull, who is in Jakarta to attend a summit meeting of the 21-member Indian Ocean Rim Association (IORA), said.
Indonesia's Coordinating Minister for Maritime Affairs, Luhut Pandjaitan, also said after meeting Australian Foreign Minister Julie Bishop on Monday that he did not envisage joint patrols though there were other areas to cooperate on.
"I don't know whether it necessary for us to do join patrols over there, but for sure, for economic activity, we can do," Pandjaitan said.
China claims almost the entire South China Sea, through which about $5 trillion worth of trade passes each year. Brunei, Malaysia, the Philippines, Taiwan and Vietnam also have claims to parts of the sea.
Indonesia has traditionally taken a neutral position on the South China Sea, acting as a buffer between China and fellow members of the Association of Southeast Asian Nations (Asean) that have the most at stake, the Philippines and Vietnam.
But Jakarta was angered after China said the two countries had "overlapping claims" to waters close to Indonesia's Natuna Islands and staged large-scale exercise on the edge of South China Sea in October.
Australia – which says it takes no sides on South China Sea disputes but has supported United States-led freedom of navigation activities in the region – has been rebuilding ties with Indonesia after a recent military spat.
Reuters
——————
Posted by AWPA Sydney News at 11:07 PM