The incident on Monday appeared to be the latest in a string of violent clashes in Papua, where decades-old insurgencies showed no signs of abating.
Police identified the killed Papuan man as Maikel Merani, who they said has long been on their most-wanted list.
Maikel reportedly hid in his family's home in Yapen and resisted arrest before being shot dead, Papua Police spokesman Chief Comr. Ahmad Kamal said.
"Our officers were involved in a shootout in Konti Unai village which resulted in the death of group leader Maikel Merani," Ahmad told state news agency Antara on Monday.
The police seized an assault rifle, nine ammunition magazines, 13 rounds of revolver bullets, 230 rounds of 5.56-caliber ammunition, a bayonet, a vest and cash during the raid.
Police also confiscated the banned Morning Star flag, the symbol of the Papuan independence movement.
Police said Maikel's body has been taken to Serui hospital in Yapen, but did not give details on the fate of other group members.

Maikel was with two other Papuans when police raided his home, United Liberation Movement for West Papua spokesman Benny Wenda said in a statement on Monday.
Officers reportedly told the men — one of them believed to be Maikel's father — to put their hands over their heads and crouch down. According to a ULMWP witness, police then shot Maikel several times and tortured the other two men.
Officers also harassed other family members at the house, according to the witness. Police then reportedly took the man believed to be Maikel's father to their office for interrogation.
Calling the incident "same old story," Benny said, "Police stigmatize every Papuan as criminal or separatist as justification for killing them and for their illegal occupation of our country."
Papuan nationalists have long protested against a UN-backed referendum in 1969 that saw the province become part of Indonesia, arguing it was rigged.
They have been mounting an insurgency since then, complaining that the Indonesian government has been giving resource-rich Papua an unfair share of the state's wealth.
This has led to allegedly rampant human rights abuses, and Papuan activists have been pleading for support for independence from the Melanesian community in the Pacific.
"We desperately need the international community to look at the deteriorating human rights situation in West Papua," Benny said.
"Everyday, West Papua is becoming a killing field."
———————————-
http://www.radionz.co.nz/international/pacific-news/327773/papua-government-encouraged-by-progress-of-students-in-nz
2) Papua government encouraged by progress of students in NZ
23 minutes ago
A team from the Papua provincial government in Indonesia is currently in New Zealand checking the progress of dozens of Papuan students studying there.
There are approximately 80 Papuan students in the cities of Auckland, Wellington, Christchurch, Nelson and Palmerston North.
They are an assortment of students at colleges, universities and technical institutions.
One of the visiting team is Dina Ayonda, the executive assistant for Papua’s Governor Lukas Enembe
She said it had been amazing to see how much the students were growing in New Zealand .
Listen to the full report on Dateline Pacific duration3′ :27″
Add to playlist
Download
Listen to the full report on Dateline Pacific
"These two girls in Nelson Aviation College, they are the two top-notch students at the college," Ms Ayonda said.
"And you know, everyone praises them for how they do: in their classes, the theory, the flying, everything.
"They [the college] said they work so hard, they try to maintain their achievements, and then they do well. In High Schools as well."
The provincial government saw the New Zealand placements as an opportunity for Papua province to boost the quality of its education
"Because we're struggling with the quality of our education system back home," Ms Ayonda said.
"So this way we can boost the quality of our people by sending them overseas. And then they come back to Papua and start helping us in developing the province."
The placements are arranged between the Papua Government and the individual New Zealand educational institutions.
While in New Zealand, the Papua government team is also researching a new documentary about the students’ overseas training experience.
———————————————————————-
https://awasmifee.potager.org/?p=1511
3) The commercialisation of ancestral forest
By ADMIN | Published: MARCH 29, 2017 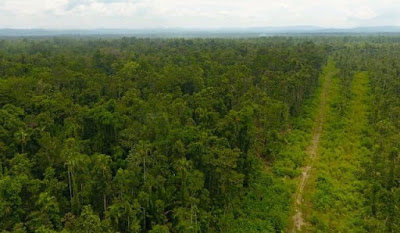