The request by Vanuatu’s Justice Minister Ronald Warsal on behalf of Vanuatu, Tonga, Nauru, Palau, Tuvalu, the Marshall Islands, and Solomon Islands expresses concern about “widespread violations” of human rights in Papua including extrajudicial killings of Papuan activists. The Indonesian government has rejected these allegations and stated that it “always endeavoured to address any allegation of human rights violation” in Papua.
Pacific island states have good reason to be concerned about human rights abuses in Papua. Although the government of President Joko “Jokowi” Widodo has repeatedly promised a new approach to Papua, home to a low-level insurgency and a peaceful pro-independence movement, the reality has not matched the rhetoric.
In April 2016, the Indonesian government announced it would seek accountability for 11 high-priority human rights cases in Papua from past years. However, the government has not provided any details as to when, where, and how the cases would be addressed. Indonesian authorities continue to restrict access by foreign journalists and rights monitors to the region.
Throughout 2016, Indonesian police arrested more than 3,900 peaceful protesters in Papua during protests for causes including support for Papuan independence. Police released the detainees after several hours without charge, but their arrests underline the official lack of tolerance for peaceful expression of political aspirations in Papua. As of September 2016, 37 Papuan activists were still imprisoned after being convicted of treason, many for nonviolent “crimes” such as public display of the pro-independence Morning Star flag.
If the Indonesian government really wants to improve human rights in Papua, it needs to stop reflexively denying the abuses that occur there and open up Papua to UN investigators. Until it does, those abuses – and international pressure on Indonesia to stop them – will only continue.
——————————————————-
http://www.thejakartapost.com/news/2017/03/08/mimika-warned-not-to-repeat-the-case-of-cepu-block.html
2) Mimika warned not to repeat the case of Cepu block
Viriya P. Singgih The Jakarta Post
Jakarta | Wed, March 8, 2017 | 04:50 pm 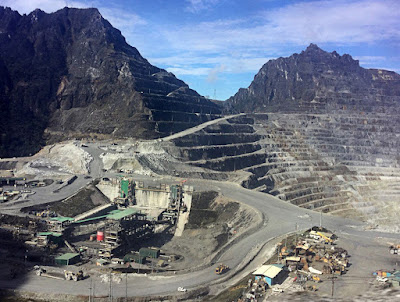 A vehicle passes through gold and copper mining company's PT Freeport Indonesia’s (PTFI) mining area in Grasberg, Mimika, Papua. (JP/Nethy Dharma Somba)
Former Coordinating Maritime Affairs Minister Rizal Ramli has warned the Mimika administration in Papua to be cautious following its aspirations to get shares in gold and copper mining company PT Freeport Indonesia, especially considering the previous case of the Cepu block in Bojonegoro, East Java.
Mimika administration in Papua has demanded 10 to 20 percent of shares in Freeport Indonesia, a subsidiary of the United States-based mining giant Freeport McMoRan, in return for the company’s land compensation for operating in the region for the past half-century.
“I support the Mimika administration’s plan as the company has never paid compensation for the land used,” Rizal said recently in Jakarta.
(Read also: Workers urge government to settle dispute with Freeport)
However, he said the administration should not repeat the mistake made by Bojonegoro administration in the case of the Cepu block, which is operated by US oil and gas company ExxonMobil Indonesia.
The Bojonegoro administration has 4.46 percent of participating interest in Cepu block through subsidiary PT Asri Dharma Sejahtera (ADS), which it has made a revenue-sharing agreement with PT Surya Energi Raya (SER) owned by ruling NasDem Party chairman Surya Paloh. Under the agreement, SER has a portion of 75 percent, while only 25 percent is taken by ADS.
“Because the Bojonegoro administration had no money to buy the shares in Cepu block, it made an agreement with a company. As a result, people in Bojonegoro get nothing out of it,” Rizal said. “Don’t let the same thing happen in the case of Freeport Indonesia.” (bbn)
———————
Posted by AWPA Sydney News at 11:58 AM