https://www.rnz.co.nz/international/pacific-news/394211/protest-at-indonesian-trade-show-in-auckland
Protest at Indonesian trade show in Auckland
18 minutes ago
Advocates for West Papua in New Zealand are protesting a major Pacific trade show put on by Indonesia. 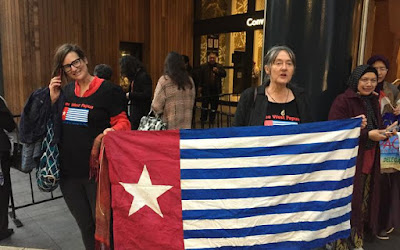 West Papua protest at Indonesia's Pacific Exposition in Auckland Photo: RNZ Pacific/Mackenzie Smith
About a dozen people including New Zealand MP Marama Davidson have gathered in Auckland to oppose the Pacific Exposition.
The event, which brings together dozens of government officials, is the latest effort by Indonesia to win support in the Pacific and to open trade links in the region.
But protestor and former MP Catherine Delahunty said it was an insult to the people of West Papua.
"We're here today because the Indonesian government have set up this so-called Pacific Exposition to justify their non-existent Pacific status-hood," Ms Delahunty said.
"They're trying to justify what they're doing in West Papua by a diplomacy move that makes them part of the Pacific but in actual fact they are bad neighbours to the country of West Papua," she said.
Posted by AWPA Sydney News at 3:45 PM