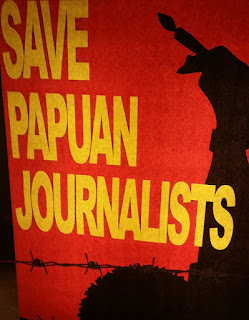 A poster at a media freedom in West Papua summit in Jakarta during World Press Freedom Day conference in May 2017. Image: David Robie/PMC

Indonesia recently hosted a bold public relations window-dressing expo in Auckland presenting itself as a “Pacific” nation while attempting to provide an unconvincing impression of normality in the two Melanesian provinces known collectively as West Papua.
Indonesian Foreign Minister Retno Marsudi hailed “a new era of Pacific partnership – a Pacific Elevation” while New Zealand’s counterpart Winston Peters responded to human rights questions with a remarkably naïve statement that Indonesia was “making progress” by welcoming a press pack to West Papua.
Nothing could be further from the truth. Papuan critics have dismissed this Pacific Expo as effectively “fake news” – a cover-up of more than a half-century of repression and distortion.
READ MORE: ‘It opened my eyes’: The Indonesian woman fighting for West Papuan rights
Frequent reports from human rights agencies have detailed a litany of abuse, violence and repression tantamount to “slow genocide”, as at least one author has described it.
The atrocious current conditions in West Papua were highlighted yet again last week with a report by the relief aid group Solidarity Team for Nduga claiming that at least 139 people have died in internal refugee camps in the Highlands of West Papua and more than 5000 people have been displaced since renewed fighting broke out between the Indonesian military and West Papua pro-independence rebels last December.

Among the latest human rights violation reports has been a document presented to Britain’s House of Commons Foreign Affairs Committee last month.
Prepared by researcher Pelagio Da Costa Sarmento of the respected London-based Indonesian human rights agency Tapol and editor Victor Mambor of the Jayapura-based newspaper and website TabloidJubi, the submission was in response to an inquiry by the Commons Select Committee into the Foreign and Commonwealth Office (FCO) and Global Media Freedom in an effort to combat disinformation.
A covering declaration accompanying the submission made it clear it was exposing the current state of lack of media freedom in West Papua.
“Over the last 10 years, journalists and news organisations have faced serious threats to their personal security, as well as being targeted by digital disinformation campaigns that aimed to disrupt the work of legitimate news sources and reporting,” the declaration said.
“The death of two local journalists, assaults on multiple others and several cases of international journalists being deported from Indonesia for reporting on or in West Papua underscores the lack of media freedom of West Papua.”
Promises not keptIndonesia ranks 124th out of 180 countries in the Reporters Without Borders Global Press Freedom Index, which states “President Joko ‘Jokowi’ Widodo did not keep his campaign promises during his five-year term.
“His presidency was marked by serious media freedom violations, including drastic restrictions on media access to West Papua … where violence against local journalists keeps on growing.”

2) Freedom of the press in Indonesian-occupied West Papua

Eight members of the House of Lords call on the foreign secretary to take a strong stand against the banning of nearly all foreign media, NGOs and humanitarian agencies from entering West Papua

We, members of the House of Lords, would like to draw Jeremy Hunt’s attention to the severe restrictions on press freedom in Indonesian-occupied West Papua. Since the Indonesian takeover in 1963, nearly all foreign media, NGOs and humanitarian agencies have been banned from entering West Papua. At a time of allegations of widespread, systemic human rights abuses against the indigenous population, the Indonesian government has sought to control the flow of information from West Papua to the outside world.
UN officials have found themselves barred from accessing West Papua. Former UN high commissioner for human rights, Zeid Ra’ad Al Hussein, issued a statement of concern over Indonesia’s persistent foot-dragging in response to his desire to visit the territory. The current high commissioner, Michelle Bachelet, has similarly found her outstanding request for access unfulfilled. West Papuan journalists working locally face even more severe threats. This decade, several have been killed, arrested, beaten or tortured, allegedly for their reporting on Indonesian security service activities.