Lest we forget-21 years since the Biak massacre

21 years since the Biak massacre 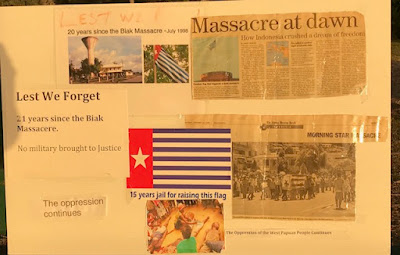 The 6 July marks 21 years since the Biak Massacre when the Indonesian security forces massacred scores of people in Biak, West Papua.
The victims, included women and children who had gathered for a peaceful rally. They were killed at the base of a water tower flying the Morning Star flag 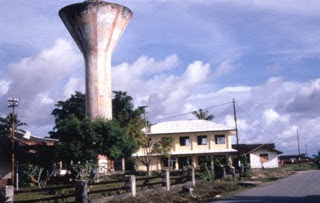 On the 2 July 1998, the West Papuan Morning Star flag was raised on top of a water tower near the harbour in Biak. Activists and local people gathered beneath it singing songs and holding traditional dances. As the rally continued, many more people in the area joined in with numbers reaching up to 500 people.

On the 6 July the Indonesian security forces attacked the demonstrators, massacring scores of people. The victims included women and children who had gathered for the peaceful gathering  were killed at the base of the water tower. Other Papuans were rounded up and later taken out to sea where they were thrown off naval ships and drowned. No security force personal were ever charged over the killings.

Joe Collins of AWPA said, "21 years after the Biak massacre no Indonesian security force member has been charged or brought to justice for the human rights abuses committed against peaceful demonstrators”.  “The oppression of the West Papuan people continues".  We just have to look at the situation in Nduga to realise there is no improvement in the human rights situation in West Papua. The military operation that took place in Nduga has caused thousands of people including children to flee their homes for safety to neighbouring districts, creating internal refugees. 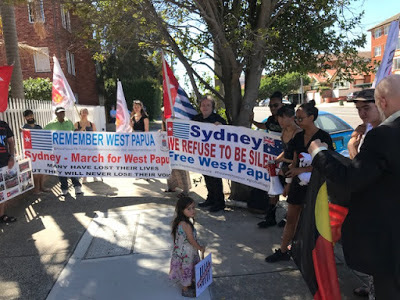 Photo."Stop the Genocide in West Papua" rally in Sydney (outside Indonesian consulate) (12 February)


July 6 was the anniversary of one of the shameful events in Australia’s relationship with Indonesia. In July 1998 on Biak—a tiny island just north of Australia—the Indonesian military carried out a massacre of more than 100 people, mostly women. And to Australia’s shame, despite an intelligence investigation confirming that it happened, the Australian government refused to condemn the massacre, and to this day has refused to release the report.

Eminent Australian lawyers are demanding Indonesian authorities investigate allegations of a massacre fifteen years ago in West Papua in which more than one hundred civilians were killed, raped or tortured.
video
https://www.abc.net.au/7.30/searching-for-the-truth-about-a-massacre-in-west/5160204
------------------------------

Posted by AWPA Sydney News at 5:35 AM