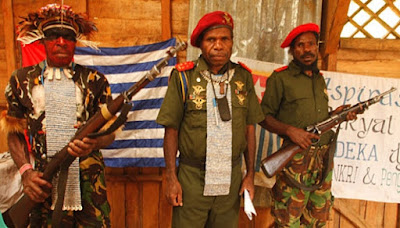 TEMPO.CO, Jakarta - The Indonesian Military (TNI) commander Marshall Hadi Tjahjanto called the formation of the West Papua Army was a separatist activity. In response to the issue, he said, his institution would carry out the law enforcement operation.
“We will carry out law enforcement operation or gakum there,” he said in Boyolali, Thursday, July 4.
According to Hadi, TNI along with the National Police (Polri) would run the operation.
“The leading sector is Polri, TNI will give hands,” he added.
Previously, three armed separatist groups in Papua announced they had joined West Papua Army to lobby for independence from Indonesia and are ready to "take over our country".
The army was under the United Liberation Movement for West Papua (ULMWP) led by exiled leader Benny Wenda. The group uses political and diplomatic means in a push for independence.
AHMAD RAFIQ | ABC
——————————————————
A google translate. Be-aware google translate can be a bit erratic.
orignal bahasa link at
https://www.jubi.co.id/knpb-pertahankan-tpnpb-sebagai-satu-satunya-pertahanan-militer-west-papua/?utm_campaign=shareaholic&utm_medium=facebook&utm_source=socialnetwork&fbclid=IwAR0d9C4-5zqdcQShsIJvfHZ0vTgAzSgPUHK44ruA3A-9W-e2dllfxkVFbbs
2) Maintain TPNPB as West Papua's only military defense
Reporter: Hengky Yeimo 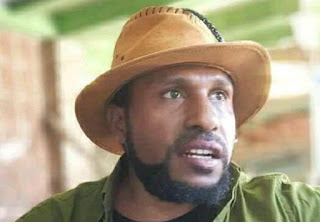 International spokesperson for the West Papua National Committee (KNPB), Victor Yeimo. - Jubi / Hengky Yeimo
Papua No. 1 News Portal | Jubi
Nabire, Jubi - The establishment of the West Papua Army in Vanimo, Papua New Guinea by officials of the United Liberation Movement for West Papua or ULMWP was taken seriously by the West Papua National Committee or KNPB. KNPB through its international spokesman Victor Yeimo stressed that all parties must continue to support the West Papua National Liberation Army as the only military defense in West Papua.
Previously, on July 1, 2019, ULMWP through spokesman Jacob Rumbiak announced that the West Papua National Liberation Army (TPNPB), West Papua Revolutionary Army (TRWP), West Papua National Army (TNPB) had been united under the West Papua Army (WPA) name . Rumbiyak also claimed that TPNPB, TRWP, and TNPB followed a West Papua Army command line that was below the ULMWP.
Also read Military Wings Liberation of West Papua united in West Papua Army (WPA)
However, the Rumbiak Claim was denied by a TPNPB spokesman Sebby Sambom who said he and TPNPB were not involved in the Extraordinary I Congress held by the WPA. "I heard that the Extraordinary Congress (KLB) was held in Vanimo last May. But we don't know at all. So we rejected all the results of the KLB, "Sebby Sambom said on Thursday (07/04/2019) via telephone.
The objection to Rumbiak's claim was also conveyed by the leader of the Free Papua Organization (OPM) Jeffrey Bomanak. Then now, Yeimo also calls for all parties to continue to support TPNPB as the only military defense in West Papua.
"TPNPB is a revolutionary fire that must not be condemned. He has become the body, soul and spirit of the ideals of the struggle for West Papua's national liberation, "said Victor Yeimo when contacted on Thursday (07/04/2019).
Yeimo believes that in the revolutionary struggle there should not be many military organizations. "The military must be a command, a structure, and a military discipline. If there are many, the potential for mutual coup will occur. The enemy [will] be easy to complain about, "he added.
He stated that the name TPNPB had represented the ideals of national liberation. "The aim of the West Papua revolution is national liberation. [If the name is changed], the name [new] does not give the spirit of the national liberation struggle, "explained Yeimo.
Yeimo appealed to West Papua activists who are members of the ULMWP, including activists who fought through diplomatic channels abroad, so wisely to assemble the power of struggle. "The spirit of national unity supports what exists. Not destroying existing forces. That's the dialectic backwards.
The current strength of TPNPB is the history of resistance that is endured with many sacrifices. According to Yeimo, TPNPB should not be killed with the jargon of "uniting" TPNPB with TRWP and TNPB.
Also read: OPM and TPNPB do not know KLB WPA in Vanimo
"That is the same as the patterns of the imperialist state destroying the anti-imperialist state, namely to build rival groups / opposition to destroy existing forces. "Unity is not a formality on paper, but it must be real," he said.
Yeimo assessed that West Papua Army is not a real union or consolidation, because almost all existing defense group headquarters are still subject to the July 1, 1971 Constitution and the military wing of TPNPB. He stressed that unity can only be achieved if the parties that have already existed mutually accept the existence of other parties who are equally fighting for the liberation of West Papua.
He hopes ULMWP will focus on lobbying work and international diplomacy, because the West Papuan liberation struggle requires quality work. Yeimo reminded only those who exist in the field of resistance who know how to mobilize resistance in the field. (*)
Editor: Aryo Wisanggeni G
------------------------------------
https://en.tempo.co/read/1221009/papua-police-discharge-officer-who-shot-civilian
3) Papua Police Discharge Officer who Shot Civilian
Translator:

TEMPO.CO, Jakarta - The Papua Police will fire the officer who allegedly shot a civilian at the Ilwayab District of Merauke Regency.
Papua Police chief Insp. Gen. Rudolf A. Rodja said that the officer, Brig. RK, would be discharged with dishonor, as instructed by National chief of police Gen. Tito Karnavian.
RK shot a man named Yohan Moiwend at the Tanjung Bunga café in Ilwayab, on June 2. Yohan was drinking with his friends, when he engaged in an argument with RK that lead to fist fighting before a fire was shot.  Yohan died because of the gun wound.
Rudolf said the case has tainted the police force's reputation, thus a strict action must be taken. The case files have been submitted to the Merauke District Attorney's Office.
Rudolf said he has instructed police officers to be more careful when using their firearms.
ANTARA
———————————————
https://en.tempo.co/read/1221285/tni-commander-believes-missing-mi-17-chopper-passengers-survive?Engteco_newsUtama&campaign=Engteco_newsUtama_Click_3

4 July 2019 20:39 WIB
TEMPO.CO, Jakarta - An Indonesian Military's (TNI) MI-17 helicopter that lost contact during flights from Oksibil, Pegunungan Bintang District, Papua, has yet to be found. The search is still afoot.
TNI commander Marshall Hadi Tjahjanto said that the search was hampered as the site was difficult to reach, and the team lack of communication devices. “There are hills and forests,” said Hadi in Boyolali, Thursday, July 4.
The team was still searching via land and air to find the missing chopper. “I always monitor the search development every night,” he added.
Hadi believed the crew and passengers abroad could be found alive. “There was a similar incident occurred to the same type of aircraft, and all passengers survived,” he said.
As reported earlier, the Army’s missing MI-17 helicopter lost contact with the Oksibil Airport, Papua, 5-7 minutes after taking off on Friday, June 28. The crew members comprised pilots Captain Aris and First Lt Bambang, co-pilot First Lt Ahwar, Chief Sergeant Suriyatna, Second Sergeant Dita, Private Dwi Purnomo, and Private Aharul.
AHMAD RAFIQ
-----------