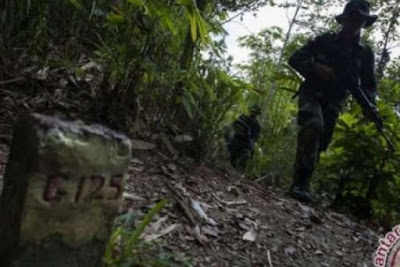 Indonesian army personnel in Papua Province (ANTARA)
Jayapura, Papua (ANTARA) - An Indonesian soldier died of a serious shot wound on his waist after a group of armed Papuan separatists launched a hit-and-run attack on the army personnel securing the construction process of a bridge in Yuguru Subdistrict, Nduga District, Papua Province, on Saturday."An armed separatist group in Nduga District has again launched an attack, and an army soldier securing the Trans-Papua road project fell down," Spokesman of the XVII/Cenderawasih Regional Military Command Colonel M.Aidi said here on Sunday.The armed rebels, likely led by Egianus Kogoya, launched their hit-and-run attack from a thick wood, which was about 300 meters away from the position of a group of the TNI soldiers taking a rest for performing a midday (dzuhur) prayer and having lunch.In the assault taking place at the construction site of Yaguru River Bridge which is part of the Wamena-Mumugu road section, Second Private Usman Hambela suffered a serious shot wound on his waist, he said.The Indonesian (TNI) soldiers fired back and attempted to chase the rebels. However, they decided to stop chasing the attackers for safety reason due to the ground condition with thick woods and deep ravine, he said.An effort to evacuate the wounded soldier to a hospital was made by sending a helicopter but it was hampered by bad weather around Nduga District's area. "Until Saturday evening, the evacuation cannot yet be conducted," he said.Second Private Usman Hambela of the Infantry Battalion 755/Yalet reportedly died at about 02.10 p.m. local time because of the shot wound he suffered, M.Aidi said.A circle of violence remains unstoppable in the Indonesian province of Papua. On Feb 2, 2019, for instance, a civilian was gunned down by the armed Papuan rebels in a village of Jaya Wijaya District.This murder of Sugeng Efendi, a resident of Wuyukwi Village, Mulia Subdistrict has just extended the death toll of civilians in the hands of the armed Papuan rebels following the killings of 31 construction workers in December 2018.The 25-year-old kiosk keeper was shot dead by an armed Papuan rebel two days after the Free Papua Movement (OPM) announced its official support for its armed wing's declaration of war against Indonesia.According to Radio New Zealand (RNZ), the announcement was made by OPM Spokesman Jeffrey Bomanak in a press conference held in Port Moresby, the capital city of Papua New Guinea (PNG), on Jan 31, 2019.RNZ quoted Bomanak as saying that the war against the Unitary State of the Republic of Indonesia "would not end until Jakarta agreed to meet for peaceful negotiations, for which the OPM is establishing a team of negotiators.”
Related news: Indonesia condemns decision to award Benny WendaRelated news: Remains of military officers shot in Papua flown to hometowns
Posted by AWPA Sydney News at 1:32 PM