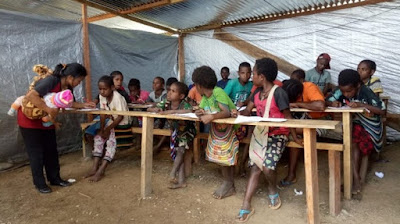 A teacher formerly posted in Nduga, holds her infant while instructing the children in the emergency school / Sorang Saragih
Just like any 12-year-old boy, Daniel appeared happy and carefree as he played soccer with his friends in the churchyard of Kingmi Weneroma. Daniel is just one of more than 700 children from Nduga Regency currently living in shelters in Wamena, the capital of Jayawijaya Regency in the Baliem Valley in Papua’s highlands. They were displaced from their homes in late December 2018.
Wamena’s estimated population of over 30,000 swelled with the arrival of over 2300 internally displaced persons (IDPs) from neighbouring Nduga Regency. As of 3 May 2019, the number of civilian deaths among the displaced Nduga as a result of the armed conflict is over 50, according to data from local volunteers in Wamena.
The Nduga residents fled their homes due to an escalation in the prolonged armed conflict between the Indonesian Military (TNI) and pro-independence fighters. In early December 2018, a new wave of conflict began shortly after 17 road construction workers from the state-owned PT Istaka Karya were killed. As the joint operation between the TNI and the police unfolded, 25 civilians and five security officers were killed and eleven out of 32 districts in Nduga were isolated.

When Fina heard the shots firing randomly at honai (traditional houses) and from helicopters at the people below, her instincts told her to run. A young woman from Mugi District in Nduga, Fina attempted to flee by running further into the bush. Together with eight others, including four children, Fina, who is 26, travelled on foot before finally reaching the relative safety of Wamena. It took six days for Fina and four children to reach Wamena after hiding in the jungle for a week. They had nothing but the clothes on their backs.
On 1 December 2018, Teresa was sitting in her house when she heard gunfire coming from a nearby mountain. She went outside to see what had happened. Her neighbours told her that the military wing of OPM (the Free Papua Movement) had killed around 17 non-Papuans. Under gunfire she ran to find two non-Papuan construction workers who lived near her house. After accompanying them to a safe place, on the way home she stumpled and broke her leg. She decided to hide in the jungle before making her way to Wamena along with her sister.
Armed conflict is not new to the people of Nduga Regency. In 1996, then-Lieutenant Colonel Prabowo Subianto led a military operation to rescue foreign researchers in Mapenduma District, Nduga. According to accounts from locals, the operation claimed the lives of hundreds of indigenous people. These stories are passed down from one generation to the next. The most recent TNI-led joint military–police operation served to reignite these memories among the Nduga people and local Papuans in general.

Past traumas in the present

My fieldwork on local civil society organisations in Papua brought me to meet Ence Geong, a prominent activist and coordinator of local volunteers of the displaced Nduga in Wamena. Ence facilitated meeting and interviews for me with people in Weneroma, Wamena. I could see deep trauma reflected in the eyes of the Nduga IDPs, particularly the children. In one encounter, a boy talked about his future in Nduga. He was left with nothing when his house was burned down in the conflict. I wanted to take some time to talk to the children in order to understand better what they were going through, however, as a non-Papuan, communicating was not easy as some of them only speak their local language. Local Wamena residents volunteered to translate and in turn became counsellors for the children, listening and encouraging them to talk.
Though they have no particular credentials for dealing with victims of conflict and post-conflict trauma, the volunteers at Wamena have developed programs to assist, for the children in particular. After school the children are encouraged to take part in social activities, playing soccer and volleyball and also weaving noken (a bag made of woven or knotted bark). While they weave, the children have a safe space to talk about their daily lives and dreams. Nonetheless, for all their goodwill and efforts these volunteers are untrained and the support they can provide to the children and others is limited.

A long history of armed conflict in the Papuan highlands means that the internally displaced persons of Nduga currently living in Wamena have significant and multi-generational experiences of trauma. Thus far, the government’s response and the support provided to these people is greatly lacking.
Papua is the only region in Indonesia were small-scale armed groups remain active in their struggle against the state. Since the 1960s armed conflict between the Indonesian Military and OPM guerrillas has caused the displacement of tens of thousands of Papuans – some internally and others finding asylum outside Indonesia. A 2007 study from the Refugees Studies Center in Oxford estimated that 20,000 people had been internally displaced in Papua since the implementation of Law No. 21/2001 on special autonomy. It can be assumed that this number has increased in the past decade. Due to restrictions on access imposed by the Indonesian security forces, however, credible data is lacking.
In 2006 the UNHCR reported that 13,500 Papuans were in exile in Papua New Guinea (PNG) as the result of various military operations since the 1960s. Diana Glazebrook’s interviews with Papuans in exile in PNG in 1998-99 published in the Journal of Refugee Studies found that their primary motivation for seeking refuge was political, due to independence aspirations: ‘If I stay here there is nothing, yet if I return I do not know whether I will be safe’ explained one interviewee. Although some local PNG authorities have appealed to the refugees to return to Papua, most of them refuse, citing security reasons.
Since 2000, an escalation in the conflict between the OPM fighters and the Indonesian Military has forced many to flee their homes, sometimes several times. ELSHAM, a local human rights organisation, estimated that in 2001 thousands of Indigenous Papuans fled their homes after security forces conducted sweeping operations in Waisor to track down OPM guerrillas. In January 2007, more than 5300 people fled their homes due to military operations launched in response to the raising of the Morning Star flag in Mulia, Puncak Jaya Regency. In the Papuan highlands, Wamena, Puncak Jaya, Lanny Jaya, Yahukimo and Nduga are places with long histories of conflict, locally known as red zones.

Where is the central government?

The two primary legal regulations which guide the Indonesian government’s response to internal displacement due to disaster, conflict and inter-communal violence are Law No. 24/2007 on natural disaster management and Law No. 7/2012 on social conflict management. However, these regulations fail to provide an adequate framework for handling the Papuan context.
The politically driven conflict between the Indonesian central government and Papuans who aspire to independence is highly sensitive. The 2012 regulation on social conflict management is based on horizontal conflicts, not vertical or asymmetrical conflicts such as those which question Indonesia's sovereignty and legitimacy in a territory, as is the case with Papua and West Papua.
As a result, the Ministry for Social Affairs has no credible data on the number of IDPs currently in Papua and West Papua. This is partly due to restricted access to the conflict areas in Papua, including for humanitarian aid, but also due to the lack of state recognition of the IDPs as victims of armed conflict. For those from Nduga this situation has two critical and potentially life-threatening implications.
First, there is currently no significant government-coordinated assistance in Wamena and surrounds. Based on my observations and reports from local volunteers, there have only been uncoordinated and inefficient efforts by central and local government, and civil society organisations, to distribute food and medicine and other materials to the IDPs scattered over 23 locations in Wamena.
At the time of writing, the Ministry of Social Affairs had made only one official visit to the area, after which there was no noticeable effort made to help IDPs there. Not even the children. This inaction by the ministry reflects the central government’s unwillingness to meet the specific needs of IDPs in Nduga, which sits in contrast to efforts made to assist people elsewhere in the country who are displaced by natural disasters or inter-communal violence.
Instead, the initiative to provide for these people has come mostly from the Nduga local authority and from civil society organisations, and largely in response to local and national media reporting of their conditions. Initiatives by the Nduga government, along with churches, student and other youth organisations and local and national NGOs, are coordinated by a foundation called Yayasan Teratai Hati Papua (YTHP). They provide much-needed material items to IDPs in Wamena, but still do not reach those living in Asmat, Yahukimo, Lanny Jaya and Mimika regions. Let alone those still trapped in the jungle.
Further, the absence of state recognition of IDPs and their specific needs as victims of conflict means there are no professional post-trauma services for these people. The noken method used by the volunteers as described above – the simple creation of a safe space to talk – is only effective in the short term. This method must be supported by professional post-conflict services, which the government can provide. In these conditions children are unlikely to be able to prepare themselves for study or to take exams. And critically, with no trauma healing services offered or support from the central government, it is only inevitable that some will be motivated to join the guerrilla fighters in the jungle or the militant political groups in cities across Papua, thus continuing the cycle of conflict and trauma.
Hipolitus Yolisandry Ringgi Wangge (hipolitusringgi@gmail.com) is a researcher at the Marthinus Academy Jakarta. He has been conducting fieldwork on local civil society organisations in post-autonomy Papua.
-----------------------
http://dailypost.vu/news/support-for-west-papua-cause-always-important-to-vanuatu/article_82ef4dd7-d9e3-5291-b7ea-f3ab0a3ae188.html
2) Support for West Papua cause always important to Vanuatu
The plight of West Papuans as Melanesian citizens is an important issue that Vanuatu must continue to support.
Minister for Foreign Affairs, International Cooperation and External Trade, Ralph Regenvanu, made this clear in his keynote address yesterday to all Vanuatu’s Heads of Missions (HOM) who are currently in the capital for the 3-day 8th HOM meeting.
“The human rights violation and marginalization of Melanesian West Papuans is not a secret and we must continue to advocate for appropriate international attention to this situation,” he said.
“The incredible show of Pacific Island solidarity is a landmark moment in the West Papuan struggle for self-determination.”
The minister reflected that when he attended the 49th Forum Leaders Meeting in Nauru with Prime Minister Charlot Salwai, new priority regional policies were adopted by Leaders.
These include regional security, climate change and disaster resilience, fisheries and oceans, childhood obesity and non-communicable diseases, and West Papua.
It is anticipated that these issues will also form the basis for discussions at this year’s Forum.
news@dailypost.vu
----------------
Posted by AWPA Sydney News at 1:27 AM