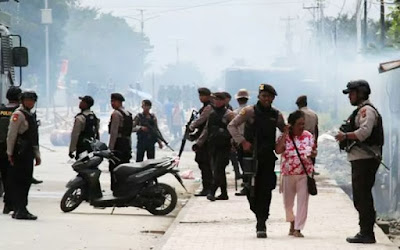 JAKARTA: Scores of alleged members of a separatist group launched an attack on a police post in Indonesia's easternmost province of Papua, seriously injuring a policeman, a police officer said on Saturday (May 16).During the attack occurring at 10pm local time on Friday night in Paniai district, the attackers stole four weapons of the police personnel in charge at the post, Papua Province's Police Chief Inspector General Paulus Waterpauw said. When the attack was launched, there was only a policeman at the post as the other personnel were attending a meeting with residents, Waterpauw said.The policeman suffered serious cuts on his neck, back, right temple and stomach, according to the officer.
"The perpetrators are probably members of the criminal armed group led by Ton Tabuni," the officer said.The victim has been rushed to the Nabire General Hospital for medical treatment.The Indonesian police and military have frequently been engaged in conflicts with the separatists in Papua province, leaving scores of casualties from both sides.The separatist Free Papua Movement (OPM) based in Papua province has been seeking an independent state through guerrilla wars decades ago, targeting soldiers, police personnel and civilians. - Xinhua/Asian News Network
------------------------
Posted by AWPA Sydney News at 4:23 PM