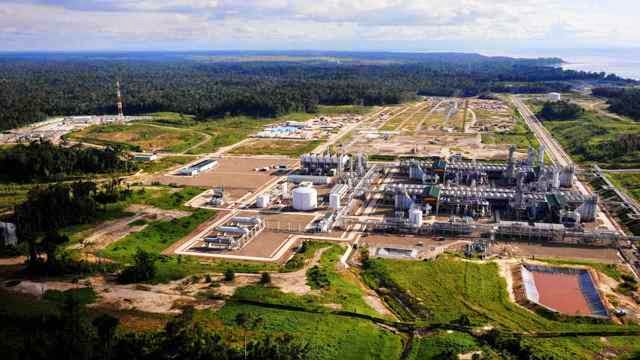 One of Indonesia’s most important industrial nodes is being rapidly developed in West Papua, and key decisions expected soon will give several multinational companies the green light to build petrochemical factories in the Bintuni area.
Sumuri District, on the southern shore of Bintuni Bay, was once covered with forest and mangrove, but has over the last 20 years already seen huge changes. In 1996 PT Varita Majutama became one of Papua’s first oil palm plantations, centring its operations around Tofoi village. Then in 2005 work started constucting the massive Tangguh Liquified Natural Gas project, built and operated by a consorsium of companies from around the world, with BP holding the largest stake. Two LNG trains are up and running, and expansion plans for a third train are progressing fast – the environmental impact assessment was approved earlier this month.
At present the gas produced is shipped out of the area, and much of it is exported to China according to the terms of a contract signed in 2002. However, as more and more gas is set to be produced in the area, several companies have proposed setting up petrochemical factories in the area.
Two, or possibly three, companies are interested in building methanol factories in the area. Foreign companies have formed joint ventures with Indonesian partners: Ferrostaal from Germany has joined forces with PT Chandra Asri to propose a development worth US$1.8 billion. Meanwhile Korean multinational LG International Corp together with local partner PT Duta Firza also claim they would invest US$3 billion to develop their ethanol plant.1 . Another name, Sojitz corporation of Japan, crops up from time to time in media articles, but their plans are not known.2 A major industrial use for methanol is in the plastics industry.
Also, state-owned fertilizer company PT Pupuk Indonesia is reportedly interested in building a factory in the area, which would presumably produce urea.
However, none of these developments is going to get the final go-ahead unless they can get a guarantee that they will get a gas supply that can meet their needs.Several articles in the mainstream and energy press over the last few months indicate that that a government decision on who gets the gas is near, possibly this October.
There are two possible sources for the gas. One is from the Tangguh project. The other is gas that may be produced from the Kasuari (Cassowary) exploration block, to the south of Tangguh and extending into Fakfak regency, which is being operated by Genting Oil from Malaysia.
It is unclear how much exploitable gas there is Genting’s exploration area. One media report in April 2014 claimed that Genting had failed to find worthwhile reserves, but another in July said they had found around 2.5 trillion cubic feet. Nevertheless, the petrochemical companies will no doubt be hoping to be allocated gas from the more established and reliable Tangguh project.
No statements have been received from local indigenous people about how they regard the new investments. While BP had taken some steps to accommodate local people’s needs in the Tangguh project, it has nevertheless caused problems, which only got worse as Genting oil commenced exploration activities – for example there have been cases of intimidation from soldiers employed by the company. What will be the effect if several new investors move in at the same time? In an industrial zone with several different companies involved, who is going to ensure indigenous voices are heard and respected. To make things worse, PT Varita Majutama has recently obtained permission for a 35371 hectare expansion of its oil palm estate and PT Rimbun Sawit Papua has also just got permission for another 30596 hectares. The forest will soon be gone too, leaving an industrial landscape where local indigenous people little choice but to become dependent on handouts from the various companies.
There is a Master Plan behind all these developments: The Master Plan for the Acceleration and Expansion of Indonesian Economic Development (MP3EI) outlines three key economic priorities for development in Papua. They are the Merauke Integrated Food and Energy Estate (MIFEE), copper mining around the Freeport area, and oil and gas development around Bintuni and Sorong. These petrochemical plants are very much in line with one of the key principles of the MP3EI philosophy, which is that downstream processing should take place within Indonesia rather than directly exporting raw materials, in this case LNG. However the plan which was introduced in 2011 and is supposed to run until 2025 is attracting increasing criticism as people across Indonesia realise that economic growth is being prioritised over the needs of rural communites and the environment.
This entry was posted in Around West Papua and tagged Bintuni, fakfak, Ferrostaal, LG International, LNG, methanol, migas, oil and gas, PT Chandra Asri, PT Duta Firza, PT Pupuk Indonesia, PT Rimbun Sawit Papua, PT Varita Majutama, Sojitz, Sumuri, Tangguh,Tofoi. Bookmark the permalink. Comments are closed, but you can leave a trackback:Trackback URL.
---------------------------------------------------------------------------------------------------------------------------------------
HTTP://EN.TEMPO.CO/READ/NEWS/2014/08/23/055601777/RAJA-AMPAT-TOURISM-NEEDS-INFRASTRUCTURE-DEVELOPMENT
SATURDAY, 23 AUGUST, 2014 | 19:00 WIB
2) Raja Ampat Tourism Needs Infrastructure Development
Zoom Out Zoom In Normal