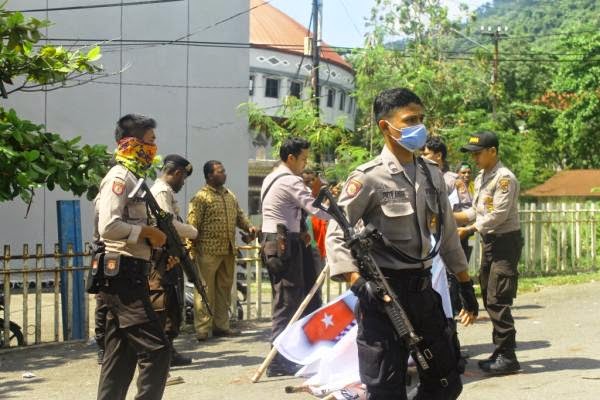 Information compiled suarapapua.com, five activists were freed Benny Hisage, Rumbrapuk Gershon, Mark Dumupa, Abraham Demeitou, and Julian Dumupa.
Meanwhile, two other activists, Jason Ngelia and Klaos Pepuho, remain in custody at this time, and its status has been increased to a suspect.
Legal counsel of the Coalition of Civil Society and Human Rights To Law Enforcement, Olga Hamadi, to suarapapua.com, confirmed the information.
"Five activists have been released this morning about 10:30 CEST, while Jason Ngelia and Klaos Pepuho still detained, and their status as a suspect," said Hamadi, when contacted the day.
According to Hamadi, Jason and Klaos as a suspect based on police reports ever made Assistant Dean Fisip Uncen, Meliana Pugu, on May 14, 2014 last. (Read: Two Of Three Students Arrested UnCen The Freed).
"The police report is related to the destruction of the glass-campus students who performed at the demo starting Fisip the inauguration of the new BEM, then Jason and Klaos alleged leader of the demo, because it had no reports that police arrested both of them."
"Therefore, the police report processing apparatus ever made Assistant Dean Fisip Uncen, Meliana Pugu, and reportedly has not revoked until now, so they immediately processed," said Hamadi.
According to the director of some Papuans, the communication with the Dean and Assistant Dean Fisip Fisip Uncen been held, to immediately revoke a police report.
"And the two leaders of the phone is already Fisip UnCen Jayapura police chief to pull the police report, but the police chief insisted and wanted to continue the legal process. It is a constraint at this time, "said Hamadi.
Meanwhile, the police chief of Jayapura, Chief. Alfred Papare, when this media confirmed the status of a suspect two activists in an uproar, do not respond. Short messages sent since morning also went unanswered.
Read news demo yesterday: Disband Police Action uproar, Four Students and Two KNPB Members Arrested; to see pictures of the action: Police Arrest Four activists in uproar and Two Members KNPB
Oktovianus POGAU

Rikas said the OPM members surrendered in Sumuruk village, Ransiki district in South Manokwari, West Papua province, as reported by Antara news agency.
He added that Cenderawasih Military Command Chief Maj. Gen. Christian Zebua received the former rebels and handed a red and white flag to them.
“The 500 OPM members declared that they had surrendered and wanted to return to the Unitary State of the Republic of Indonesia [NKRI],” he said.
Rikas said the former rebels, known as the Kaswari 1 and Kaswari 2 groups, were led by village chiefs Yance Mandacan, Sayori and Ajis Mandacan to surrender to the authorities.
“We are fed up with fighting in the jungle. It is useless and it is much better to return and rejoin NKRI. We hope our friends will follow our decision," one of the former members of OPM, which has been staging a low-intensity struggle for independence, was reported as saying.
He added the former rebels handed over an SKS carabine, two revolvers, one M16A1 assault rifle and one double-barreled rifle. (alz/nvn)