http://www.thejakartapost.com/news/2014/08/04/papua-build-hospital-hivaids-patients.html
1) Papua to build hospital  for HIV/AIDS patients
The Jakarta Post, Jakarta | Archipelago | Mon, August 04 2014, 12:09 PM
The Papua provincial administration plans to build a hospital especially for the treatment of HIV/AIDS patients, an official has said.
"So far the treatment of HIV/AIDs patients has been discriminatory. There must be a hospital specifically to treat those infected by HIV/AIDS," head of the Papua Health Office Aloysius Giyai said in Jayapura on Monday as quoted by Antara news agency.
Papua is one of the country's regions most infected by the deadly disease.
"Patients had thus far received little attention, which was why the hospital had to be built for them,” he said.
“The location [for the project] has already been chosen,” Aloysius added. Construction is expected to begin in 2015.
“Not only AIDS/HIV positive patients, the specialized hospital will also be treating patients with leprosy and other diseases like 'frambusia' skin,” he said.
The Papua provincial administration also plans to build a general hospital in Jayapura. Construction of the general hospital will start after the construction of the HIV/AIDS hospital, Aloysius said. (hak/hhr) 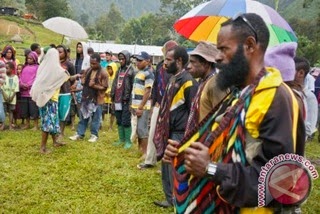 Photo document of Papuan pepole in Lanny Jaya. (ANTARA/Rico Siregar)
Jakarta (ANTARA News) - The National Commission on Violence against Women (Komnas Perempuan) has called for full investigation and prevention of more violence in Lanny Jaya District of Papua and use of excessive security approach.

"Komnas Perempuan regrets the recurrence of armed violence between armed civilian groups and security personnel, which has caused casualties, wounded and displaced persons in Lanny Jaya district," the National Commission said in a press statement received here on Sunday.

The National Commission urges all parties, both the armed civilian and police personnel to exercise restraint, to stop the violence and armed conflict, prioritizing non-violent means of persuasion and dialogue to resolve problems and conflicts.

In investigating the issue, the Commission has asked police officers not to use a security approach in dealing with the armed group, fearing possible excessive use of it may increase concern amongst the people of Lanny Jaya leading to mass evacuation.

"(The commission) also demands local Papua Provincial and Lanny Jaya District governments to ensure no recurrence of various other forms of violence and armed conflict, as well as safe and convenient situation for the people to run their daily activities," stated the commission.

Besides, the government needs to facilitate the refugees to return to their homes, ensure protection of the rights of the residents including those who were displaced to ownership of their properties such as land, houses, gardens, and livestock.

The local government is also asked to involve community leaders and local human rights workers in dealing with cases of violence, to intensify efforts in improving the quality of life of the people to create a true peace in Lanny Jaya district, the National Commission for Women added.

The Commission also encourages community leaders and local human rights workers to continue to play a constructive role in assisting and protecting the public, continue to work with various stakeholders, especially the local governments, in creating more equitable, peaceful and prosperous life of the people.
(Uu.A050/H-YH)

Jayapura, Papua (ANTARA News) - An Indonesian Military (TNI) personnel, First Private Rohman, wounded in gunfire between the authorities and an armed group in Pirime, Lanny Jaya district, Papua, on Friday, was evacuated to the Marthen Indey Hospital in Jayapura.

First Private Rohman was airlifted using a Tariku Air plane from the Tiom Airport in Lanny Jaya district and arrived in Jayapura Airport, on Friday, at 3.55 p.m. Eastern Indonesian Time.

Jayapura, Papua (ANTARA News) - Lanny Jaya District Head Befa Jigibalon has urged the Indonesian military and police to arrest the members of an outlawed armed group that have disturbed security in the district so far.

"I urge the senior officials of the military and police to take strong action and arrest the members of the armed group who have harmed the public and security officers," Befa Jigibalon stated here on Thursday.

Their brutality was beyond the limits of humanity and affected the development in the region, and therefore, they should be stopped, he emphasized.