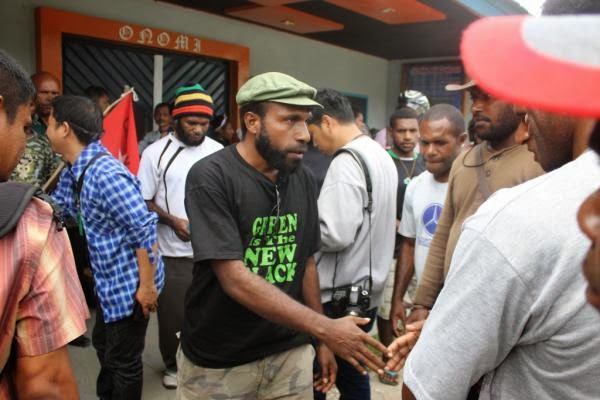 Head of Correctional Institutions (Kalapas) Abepura, Endang Latitude Hardiman, told reporters that parole letter from the Ministry of Justice and Human Rights of the Republic of Indonesia has been lowered since Monday (04/8/2014) evening.
"Due to fall afternoon, today we are among the parole letter to the prosecutor to convey information. End of the period of parole until January 19, 2016 "
"If at the time of trial is concerned parole violated the law, then the exemption will be proposed to be canceled, and he had to live the rest of the criminal," he said.
According to former Narcotics Kalapas this Doyo, Victor deserves parole because it completes all the requirements needed to be free.
"He's also good behavior in prison, so we propose to parole. When arrested he was charged Article 106 of treason, "said Kalapas.
Meanwhile, Chairman of KNPB, Agus Kossay who also came to the Abepura Prison, to pick coriander KNPB said he was happy with the release of their colleagues who have long been "sequestered" in the Indonesian prison.
"Prison is a second home for KNPB members throughout Papua. Just talk yells independent, and peaceful demonstrations alone could be arrested, and can be imprisoned for years, this is for us confused with this country, "said Kossay.
Exemption for KNPB coriander, further Kossay, is a good news for all the people of West Papua who live in Sorong to Samarai.
"KNPB will continue to fight so that the referendum could take place, because we have the right to self-determination. It adds moral support for the people of West Papua, "he said.
Victor Yeimo, while giving a press conference in front of the Abepura Prison explains, he was arrested and jailed simply because leads a peaceful non-violent demonstration.
"In court the prosecution could not prove that I Makar, so only sentenced to one year, but they did not receive and did appeal, then sentenced to three years," said Yeimo.
In the process of arrest, admitted getting Yeimo intimidation, terror and incredible beating of Indonesian security forces.
"When the other fellows do a peaceful demonstration, also always treated the same, just from playing the police arrest them, but not able to prove in court, Indonesian law did so," said former Speaker of this KNPB.
Just a note, Yeimo was released in 2011, because they have to undergo treatment outside Abepura Prison, but was re-arrested again in May 2013 on the campus of the University of Paradise, and asked to live the rest of jail term until August 2014.
Monitoring suarapapua.com, Victor Yeimo released at around 10:30 CET, and was greeted by dozens of officials KNPB in Jayapura, also looks Chairman KNPB Timika, Steven Itlay.
To see the photos: Chairman of KNPB Free From Prison Indonesia
http://suarapapua.com/read/2014/08/05/1579/ketua-umum-knpb-dibebaskan-dari-lapas-abepura

Father Alain Nafuki, Chairman of the organizing committee said the activity will be postponed to the month of October 2014, which starts from September 1 to October 4, 2014 in Vanutua future.
"The decision was made after the committee review the readiness of the various resistance groups that will be invited to attend the symposium is," said Father Alain.
One of the leaders of the Free Papua in Vanuatu, Andy suarapapua.com Ayamiseba when confirmed, confirmed the information.
"The decision to delay the meeting in accordance with the results of yesterday's date of August 5, 2014. This information should be up to the political leaders of Papua Medeka in Papua," said Andy.
According to Andy, the symposium later, some of the leaders of the organization in Papua will also be invited to discuss the concept of unity, to be able to push new applications to the Melanesian Spearhead Group (MSG) together.
Oktovianus POGAU
Posted by AWPA Sydney News at 2:26 AM