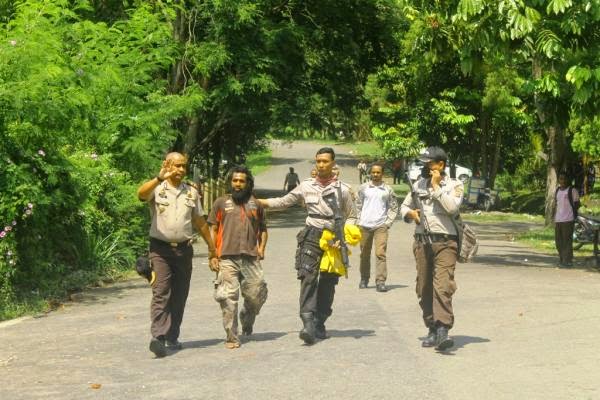 Police officers under the leadership of the Jayapura Police Chief, Chief. Alfred Papare, S.Ik also arrested four students in the name, Benny Hisage, Philip Robaha, Julian Gobay, and Klaos Pepuho on campus Uncen page below.
Then, just below the gate Campus Uncen, authorities re-arrested two women on behalf of Reggi Wenda and Rebekah Komba, who are known as members of the West Papua National Committee (KNPB). Sixth activists brought to the Jayapura Police for further questioning.
Jayapura police chief, Superintendent Alfred Papare explained, the arrests were made because of an illegal organization uproar, and not under Uncen campus.
"The agency did not issue a recommendation for action at this time. Uproar also illegal organization, therefore we disperse and arrested some of them, "said Papare, while giving a statement to reporters at the Campus page Uncen.
Papare also explains, in an uproar not have permission to perform demonstrations, because the authorities feel entitled to dismiss the action.
'They do not have a license, especially at this time before August 17, because it forces them to dismiss the action immediately, "he said.
Meanwhile, activists in uproar, Jason Ngelia explained, permission to carry out the action was presented to the Papua Police from the date of August 1, 2014.
"But the reason is not clear yan, the officers did not give us permission to carry out the action. So if it says no permission, it's nonsense, we have to say, but officials are not willing to spend a permit, "said Jason.
According to former Chairman of the BEM Fisip, the uproar hold action to denounce the New York agreement issued by the United States, the Netherlands and Indonesia on August 15, 1962, which has clearly sacrificed political rights of the people of Papua.
"At that time we had political rights were clearly suppressed by the international community and Indonesia, therefore we do protest, and hold accountable internationally," said Jason.
Vice Rector III Uncen, Fredik Sokoy when found to explain the action in place, the agency does not prohibit students held rallies, but it is less precise time.
"Younger siblings demo purposes uproar had said to me last night, but I'm delayed, as is currently being held new admissions, in addition to the already ahead of August 17," he said.
Suarapapua.com monitoring apparatus using three truck Police came, and had entered into the campus UnCen. Wakapolres Jayapura police chief and also had a dialogue with the provost UnCen be where the action is.
See the photos: These Photographs Police Arrest Four activists in uproar and Two KNPB activists
http://suarapapua.com/foto/2014/08/15/47/ini-fotofoto-polisi-tangkap-enam-aktivis-gempar-di-kampus-uncen/6/g2
Oktovianus POGAU

With the deadly clashes between Dani tribesmen and migrants in Timika already having claimed six lives, the Papua Police and the Indonesian Military (TNI) dispatched a joint team of 1,300 personnel on Thursday to prevent any further fatal incidents. “We have evacuated migrants residing around the vicinity of [the home of Dani tribe chieftain] Korea Waker […] The situation has gradually returned to normal,” Papua Police chief Insp. Gen. Yotje Mende said in Jakarta on Thursday.The clashes began on Tuesday following the death of Waker, 49, whose decapitated body was found floating in the Kali Merah River in Kampung Logpon-Pigapu on Monday evening.Waker left his home on Aug. 8 but never returned. His family reported his disappearance to the police two weeks later. “We found his badly decomposed body in the river. We handed over the remains to the family and offered an autopsy, but the family turned down the offer,” the police chief said.According to Yotje, in an apparent retaliation for Waker’s death, a group of suspected Dani tribesmen set fire to a house in Timika belonging to a migrant. Later the group attacked and killed five migrants.The victims were identified as M. Said, 70, Noris Timang, 20, Muhammad Agung Kelkulat, 27, Indra, 17, and Alfin Duran, 40. The victims had suffered multiple arrow and stab wounds.The death toll rose to six after the police recovered the remains of Otto Asso, 29, on Wednesday. Yotje suspects that migrants were behind Otto’s murder.“We are still investigating the motivation behind the attacks but our officers on the ground have said that these are solely retribution for the tribal chieftain’s death,” he said.National Police chief Gen. Sutarman urged residents of Timika not to be incited by rumors. “If you come across problems or issues, please report it to us [the police] to avoid vigilantism […] Sometimes provocation is used irresponsibly,” he said.Papua Police deputy chief Brig. Gen. Paulus Waterpauw, who is leading the security operation, said the police were closely coordinating with Mimika Regent Anselmus Petrus Youw, the Cendrawasih Military Command, religious leaders and local figures in an effort to calm tensions among Timika residents.In a coordination meeting on Thursday, Paulus said local figures had called on the security forces to provide protection for citizens and uphold the law. “[During the meeting], I warned residents not to take the law into their own hands,” he said.Paulus also pledged that the police would bring those responsible for the killings to justice. “We will continue the investigations into crimes that occurred following Waker’s death,” he said in Timika.Saldi, a Timika resident, said that prior to the security operation, many local residents had armed themselves and stayed at home to prevent clashes. “The situation has been calm because this morning the police conducted a weapons search but the schools are still closed,” he said.Ina Parlina also contributed to the story.
-------------------------------------------------------------------------------
http://www.smh.com.au/world/french-journalists-arrested-in-west-papua-could-be-charged-with-subversion-20140814-1046xp.html
3) French journalists arrested in West Papua could be charged with subversion

August 14, 2014
Jakarta: The detention of two French journalists in the Indonesian province of West Papua has taken a dangerous new turn, with local police suggesting the pair were present at an exchange of ammunition by a separatist group and should be charged with subversion.
Documentary filmmaker Thomas Dandois and camera operator Valentine Bourrat have been in immigration detention in the restive province for more than a week after being caught doing journalist work on tourist visas. But police say the pair will soon be moved into the police lockup.
There is also an Australian connection, with West Papua police spokesman Sulistyo Pudjo saying the pair were taking ''orders'' from an Australian, ''NC''. This can be revealed as the Melbourne-based Nick Chesterfield, who works for independent media outlet West Papua Media.
Ms Bourrat and Mr Dandois were filming a documentary on the separatist movement in the province for the European TV channel Arte.

He said they had ''planned to cover the exchange of bullets between [members of the armed separatist movement, the] OPM. Why would tourists do that?''
However, Mr Sulistyo said, ''We can prove they are not journalists'' because neither had an up-to-date press card.
The rhetoric represents a dangerous turn for the reporters. Simply working without a journalist visa in Indonesia usually leads to swift deportation, but talk of subversion, or ''makar'' in Bahasa, could signal a dragged-out investigation, court case and possible imprisonment.
Foreign media access to West Papua is tightly controlled and restricted by the Indonesian government.
Adding to police suspicions, Ms Bourrat worked in 2011 for the French government in Tel Aviv, Israel, and was carrying a French government passport dated from that time.
Indonesia, a predominantly Muslim country, has no diplomatic relationship with Israel, which is widely regarded with hostility and suspicion.
The first secretary at the French embassy in Jakarta, Thomas Biju-Duval, confirmed that Ms Bourrat had worked as a government volunteer in Tel Aviv and still carried a ''service passport'' from that time. ''She should have given it back, but she forgot to do that,'' he said.
But he insisted that the pair were journalists. ''We provided all the documents to the authorities in Jakarta and Jayapura, and there is no doubt about their status as journalists,'' Mr Biju-Duval said.
Despite Mr Sulistyo’s view, Mr Biju-Duval said: ''The Indonesian authorities have received and accepted that information.''
Mr Sulistyo said a number of text messages on the phones of Mr Dandois and Ms Bourrat showed they were taking ''orders'' from Mr Chesterfield, whose independent media operation is highly critical of Indonesian activities inside West Papua.
''Fortunately NC is in Australia, because if he was in Indonesia we’d arrest him,'' Mr Sulistyo said.
Mr Chesterfield confirmed that West Papua Media had given advice to the French journalists ahead of their trip, as his organisation did to ''hundreds of journalists a year'' about travelling to Papua. The advice had included information about security and story ideas.
''What we were doing is not a crime under international law, and assisting journalists is a basic element of freedom of the press,'' he said.
A blog post on a site favoured by Indonesian army members, militerindonesiamy.blogspot.com, suggested that Ms Bourrat was a French government agent and involved in a ''transnational crime'' relating to the ammunition.
----------------------------------------------------------------------------------------------

Posted by AWPA Sydney News at 1:59 AM