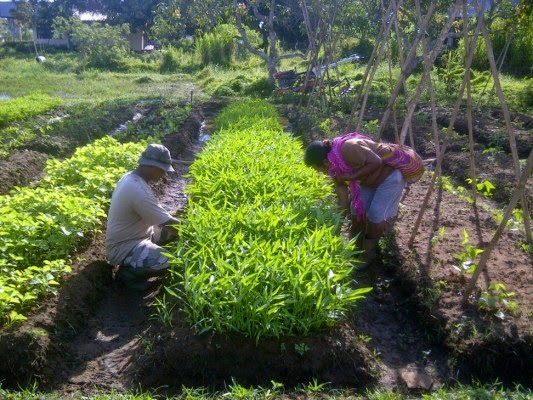 Papuan women at their farm (Jubi)

Merauke, Jubi – Papuan women traders in Merauke Regency are now growing their own vegetables and selling their commodities to the market, instead of buying them from farmers.
“They have been provided with sustainable mentoring to keep them motivated in working,” said the mentor Brother Johny Kilok on Wednesday (5/11).
Of 130 Papua women traders, Brother Kilok could only ask twenty-three women to join his group. The rest are not joining because they have been promised government grants. “I don’t know whether the grant has been distributed or not,” Kilok said.
Now, the group already has 103 plantation beds cultivated with various vegetables such as water spinach, spinach, yardlong bean and chili. They can harvest twice within a month and sell it to the market. “Yes, previously they are only selling vegetables, but now, when they are able to cultivate, they can sell their harvests in the market and their profit is higher than before. Now, they could allocate their profit for their capital and saving,” he said.
Separately, a vegetable seller Mrs. Devota Basik-Basik said her grateful for being coaching by Brother Johny Kilok. “I got the greater impact by cultivating and selling the vegetables by myself, because the profit is higher than before,” she said.  (Frans L Kobun/rom)

5) Waena Public Transport Terminal to be Completed in 2015

tabloidjubi.com Nov 5th, 2014 0 Comment
Jayapura, Jubi – The Provincial Government will have a public transport terminal in Waena next year, said the head of Municipal Transportation Office, Elby Uniputty.
“Currently the terminal is under construction and would be launched in 2015.” And in the mean time, the Municipal Transportation Office and related stakeholders continued their works to control traffic congestion at the surrounded Expo Waena area.
Uniputty said his office has received a lot of public complaints about this.
“Transportation Office worked with the Abepura Police Office, Trantib Office and Heram Sub-district Administration Office to manage the temporary terminal at Espo Waena. The parking area for public transports is in front of Museum’s Gate and traders are not allowed selling their product there,” Elby told Jubi by phone on Tuesday afternoon (4/11).
Earlier, Heram Sub-District Chief Jayakusuma admitted there should be no more stalls within the Expo Waena area because few days ago his office has removed it.
“No street traders. But we will check,” he said.
So far, some street traders are still selling foods in that area. And at four o’clock in the afternoon, the public transport’s drivers drop and pick up the passengers on the side of the road instead of in front of the museum’s gate just like in the morning.(Sindung Sukoco/rom)
----------------------------------------------------------
http://tabloidjubi.com/en/?p=3252

tabloidjubi.com Nov 5th, 2014 0 Comment
Jayapura, Jubi – The ratification of Law on Village Administration has prompted an increase in the number of new villages being proposed in West Papua Province, mainly because of provisions allowing each village to get  1 billion rupiah.
“I am worried whether it’s what the people want  or it’s only a pretext to get the money,” the head of Provincial Administration Bureau Elisa Sroyer said in Manokwari on Tuesday (4/11).
To get 1 billion, each village must have the Village Mid-Term Development Plan (RPJMK) and Family Income and Expense Budget (APBK). Until now, most of villages in Province West Papua don’t have them yet. Therefore, the Provincial Administration Bureau will immediately conduct an information campaign and carefully review their proposals.
He said the divisions of sub-districts and villages should not be proposed for financial purposes, but should be more focused on the local human resources who will be responsible to manage the budget.
“I just received the Government Regulation. We will learn it first before inform it to the public,” he said. Currently, his office has conducted socialization in Pegunungan Arfak Regency and will continue it to other regencies.
While in Province Papua, the Head of Village Community Empowerment (BPMK) Donatus Motte said the entire villages in Province Papua have not ready yet. “Villages in Papua do not have the RPJMK and APBK yet, though both are a condition to receive the budget,” he said.
At present, the total number of villages in Province Papua is 3,900 villages and the number is still increase. Currently, the Provincial Government in Papua is mapping the area boundaries to fix the issue of villages split. (Angela Flassy/rom)
-----------------------------------------------------------
http://tabloidjubi.com/en/?p=3250

7) Women in Merauke Remote Areas Give Birth in Forest

tabloidjubi.com Nov 5th, 2014 0 Comment
Merauke, Jubi – Many women in some remote areas in Merauke give birth to their babies in forest in a practice attributed to a local tradition aimed to protect them from others including paramedics. The tradition only allows a husband to accompany his wife during delivery.
“It is fact that in some villages such as Kondo, Naukenjeray and Kimaam that pregnant women choose to give birth at her back yard or in the forest instead of inside their house and being assisted by medical staff,” the head of Merauke Health Office Stefanus Osok  told Jubi on Tuesday (4/11).
Osok said although giving birth in the forest is part of their tradition, it is unsafe and the ancient practice should end.
He explained that pregnant women visited  Puskesmas or Pustu (Public Health Centre) during their pregnancy and paramedics and doctors  have advised them to give birth at Puskesmas to get prompt medical assistance. However, when the time comes, they go to the forest with their husbands.
“Actually, the Health Office has been making efforts to give understanding to the people in the villages. But, it’s not been heeded. Soon, we are planning to launch a new program, namely ‘Alert Village’,” he said.
The ‘Alert Village Program’ is aimed to result in a joint commitment between the local community and the traditional leaders and health workers to not let the pregnant women give birth in forest and instead take them to Puskesmas to be assisted by health workers.
“I will see the traditional leader of each village because they have a great influences among their people. They will speak to the women and people listened to them,” he said. Further he added,” I have ordered to all Puskemas heads to prepare the pick up transportation for pregnant women. The government disburses all the cost.”
Separately, the Merauke Deputy Regent Sunarjo during his visit to Kondo Village some time ago confirmed the fact that pregnant woman should give birth in the forest, although the midwife was there. (Frans L Kobun/rom)
-----------------------------------------------------
https://www.fidh.org/en/asia/indonesia/16437-indonesia-eu-must-press-government-on-accountability-for-past-human-rights

8) Indonesia: EU must press government on accountability for past human rights violations

Paris, Jakarta, 10 November 2014: The EU must press the Indonesian government to live up to its commitment to investigate past human rights violations, FIDH and its member organization KontraS said today.

The two organizations made the call ahead of the 5th EU-Indonesia Human Rights Dialogue, scheduled for 11 November in Jakarta.
“President Widodo’s camp has already backtracked on several human rights commitments made during the election campaign. The EU must remind the Indonesian government that tackling rampant impunity for past abuses is a necessary prerequisite for building a just, stable, and prosperous democracy,” said FIDH President Karim Lahidji.
During the Presidential election campaign, Joko Widodo, popularly known as ‘Jokowi’, outlined his vision, mission, and working programs for Indonesia. Widodo listed several key human rights pledges, which included addressing impunity for past human rights violations.
FIDH and KontraS believe that recent statements from Widodo’s administration are at odds with the President’s promise to address the issue of accountability for past abuses.
In September, Andi Widjajanto, then head of Widodo’s transition team and now Cabinet Secretary, said that investigating past human rights violations was not on an immediate priority of the new administration. Widjajanto also ruled out any additional investigation into the murder of human rights defender Munir Said Thalib and declared that the case was considered closed. While three persons were convicted in connection with the murder, no attempt has been made to identify, prosecute, and punish those who actually planned and ordered Munir’s death.
Widjajanto also backpedaled on Jokowi’s promise to set up a long-awaited ad hoc human rights court tasked with hearing cases of past human rights violations. Widjajanto indicated that establishing such a court would be impossible in the near future due to lack of funding.
“EU officials must demand the Indonesian government thoroughly investigate past human rights abuses committed by the military and other law enforcement agencies and bring the perpetrators to justice,” said KontraS Executive Director Haris Azhar.
Authorities must investigate the role that military and law enforcement agencies played in important events of Indonesia’s recent past, including: the massacre in Talangsari Village, Lampung Province, where at least 47 local villagers were killed and 88 disappeared in February 1989; the May 1998 riots in North Sumatra, Jakarta, and Central Java; the abduction and torture of 23 pro-democracy students in 1997-1998; and the killing of at least 19 students and protestors by security forces at Jakarta’s Semanggi intersection in two separate incidents on 13 November 1998 and 24 September 1999 (commonly known as Semanggi tragedy 1 & 2).
Despite Indonesia’s National Human Rights Commission’s (Komnas HAM) investigations into these incidents, the Attorney General’s Office has so far failed to initiate any criminal charges for prosecution. In some cases, the Attorney General’s Office cited the lack of an ad hoc human rights court as the reason for its inaction.
“The administration’s statements are a big disappointment for those who saw Jokowi as a clean break from the previous administrations’ failure to address impunity. To add insult to injury, Jokowi’s recent political appointments make the prospect of fostering a culture of accountability for human rights violations more remote,” said Mr. Azhar.
On 26 October, President Widodo appointed Ryamizard Ryacudu as new Defense Minister. Ryamizard is a former Army general who oversaw military operations against pro-independence movements in East Timor, Aceh, and Papua, all of which resulted in serious human rights violations against civilians, including extrajudicial killings and torture.
In August, Widodo appointed Abdullah Mahmud Hendropriyono as advisor to his transition team. Hendropriyono, a former National Intelligence Agency (BIN) Chief and retired general from the Army’s Special Forces (Kopassus), has been suspected of having played a role in the murder of Munir as well as in the Talangsari massacre.
In addition, media reports claim that President Widodo is now considering officials with a tainted human rights record for the position of BIN Chief. Candidates believed to have been shortlisted for the job include former BIN Deputy Chief As’ad Said Ali, former Jakarta military commander Sjafrie Sjamsoeddin, and former governor and Jakarta military commander Sutiyoso. As’ad was long thought to have been involved in the murder of Munir. Many believed Sjafrie and Sutiyoso were responsible for orchestrating the 1998 May riots in Jakarta, which resulted in the enforced disappearance of several students and activists. Sutiyoso was also suspected of being a commander of a military unit responsible for the killing of five Australian journalists during operations in Balibo, East Timor, in 1975.
Press contacts
Posted by AWPA Sydney News at 11:03 PM