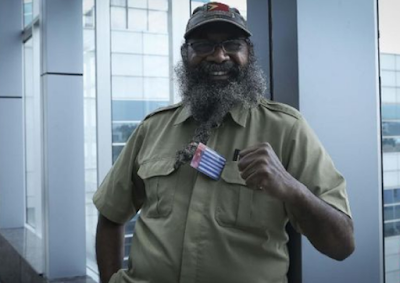 “He said that he would try to get them transferred from Nusa Kambangan to Ambon [North Maluku] and try to get them released. But to this day the four are still in prison,” he said.
Karma related how in Papua, a person could be arrested over free expression. They would be taken by the police to jail, detained and sentenced for years.
This, he said, began to improve when the international community put pressure on Indonesia and provided support to his group.
Later, however, Karma suspects that Indonesia has returned to handing out long sentences to Papuan political prisoners.
Voicing an opinion without suffering violence is not an easy thing for a Papuan person to do, he said. He claims to have once submitted a request for a permit to police to hold a Kamisan (Thursday) action in Papua, but it was rejected by the police.
Charged with treasonIn February, seven Papuans were arrested and charged with makar (treason, subversion, rebellion) – Hengki Hilapok, Alexsander Gobai, Steven Itlay, Bucthar Tabuni, Irwanus Uropmabi, Fery Kombo and Agus Kossay.
All of them are being tried at the Balikpapan District Court in East Kalimantan on charges related to their alleged involvement in riots in Papua in late 2019.
In September 2015, President Widodo visited the Abepura Penitentiary in Kamkey, Kota Baru sub-district, Abepura.
There, he personally presented a letter of agreement granting clemency to five Papuan political prisoners. The five political prisoners who were released were Apotnalogolik Lokobal (sentenced to 20 years in prison), Numbungga Telenggen (life imprisonment), Kimanus Wenda (19 years in prison), Linus Hiluka (19 years) and Jefrai Murib (life imprisonment).
“On this day we have released five people, this is a whole-hearted effort by the government in the context of ending the stigma of conflict that exists in Papua,” said Widodo in his greetings as quoted in a release by the Cabinet Secretariat.
The president asserted that the clemency was an initial step in developing Papua without conflict.
“This is an initial [step], later after this it will be followed up by giving clemency or amnesty to other [prisoners] because there are around 90 people who are still in prison. Once again this is an initial start to the release [of prisoners],” said Widodo.
Discrimination towards PapuansA human rights lawyer in Jayapura, Anum Siregar, believes that the government is discriminative and takes a different position towards Papuan people and other Indonesian citizens.
He said Papuans were easily arrested and charged with makar just because they flew the Morning Star independence flat or voiced their views. In one such case, those who were arrested were investigated without a lawyer and beaten.
“Meanwhile in Jakarta, people who talk about overthrowing the government, creating a new Parliament, a new country, are still not tried. There is discrimination between what happens in Papua and Jakarta,” he said.
Siregar said that repressive actions by the government would only worsen the situation in Papua. By continuing to arrest and detain political prisoners, he said, the government would instead create a greater desire for Papuan independence.
Translated by James Balowski for IndoLeft. The original title of the article was “Filep Karma Ungkap Janji Presiden Bebaskan Tapol Papua.”
---------------------------
Posted by AWPA Sydney News at 2:15 AM