—————————————————————
http://www.radionz.co.nz/international/pacific-news/304204/indonesia-blamed-for-papuan-nationalism
1) Indonesia blamed for Papuan nationalism
20 minutes ago
A West Papuan theologian and activist says Papuan nationalist aspirations are a direct consequence of how the Indonesian state has treated his people.
Reverend Dr Benny Giay said West Papuans have never felt a part of Indonesian society, due to state policy towards them since the former dutch New Guinea was incorporated into the republic in the 1960s. 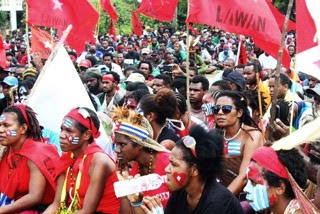 14 May 2016
The country’s permanent representative to the United Nations Assembly Ambassador Max Rai said.
Speaking to Loop PNG in an interview, he said PNG who share a land boundary with Indonesia have always maintained a peacefully relationship since gaining independence.
“Prime Minister Peter O’Neill in Bali some years ago stated that the issue of sovereignty is not questionable. We recognize West Papua as part of Indonesia’s sovereign territory. I will closely work with the Indonesian delegation in UN to ensure that the West Papua issues are address adequately as far as human rights are concerned,” Ambassador Rai said.
PNG’s foreign minister, Rimbink Pato said to Radio New Zealand International on last month, PNG’s position is and has always been that the province of Irian Jaya (the old name of Papua region) is an integral part of the sovereign nation of Indonesia.
“So we’re not interested in entertaining the issue of self-determination, because that’s never an issue for us, and that’s never a concern for us. And we’ve made it very, very clear, it’s in the heart of our bilateral relationship with Indonesia, and of course the issue of human rights in West Papua and Papua provinces and some of the other Melanesian provinces of Indonesia, “ Pato said.
He added it’s a matter in respect of which the Pacific Island leaders Forum in Port Moresby passed a resolution last year. He told Radio New Zealand International that PNG’s prime minister has written to President Widodo and informed him of the resolution of the Pacific Island leaders.
“And there will probably be a response to it. But that is not an issue that has to do with any call for self-determination,” Pato added. (Victor Mambor)
————————————————-
Posted by AWPA Sydney News at 1:22 AM