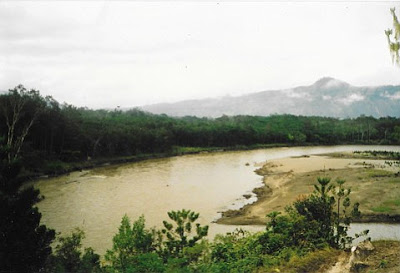 Papua contains a richness of natural beauty and natural resources, competition for which has caused conflict and a quest for independence.
When I first arrived in Papua 28 years ago, self determination was a far cry. But on my most recent visit as I hiked in the mountains, I sensed things had changed. Talking with the locals it was obvious their aspirations for independence has grown stronger, and that far cry is now an everyday melody: Papua Merdeka, Free Papua.
Their fathers were once warriors capable of shooting arrows and wounding their enemies with expert accuracy. Their mothers tended the gardens and kept their infants in noken bags elegantly draped around their backs.
Ignored for centuries, West Papua was a lost world. It wasn’t until 1938 that American explorer Richard Archbold, peering from a seaplane, was the first white man to lay eyes on the highlands of this rugged terrain and its indigenous people.
Now, simply called Papua, Malay for “frizzy-haired people,” it’s what National Geographic calls “one of the wildest, most isolated frontiers on earth.” Its geography is breathtaking: rain forests, swamps, and cloud-snagged mountains reaching to heights of 16,000 feet, the highest elevation between the Himalayas and the Andes.
Its land mass lies on the western side of the island of Papua New Guinea, considered the second largest island in the world after Greenland. Once a Dutch colony, it’s now part of Indonesia’s sprawling archipelago and 26th province.
The population is scattered: only 2 million in an area the size of California. With over 250 known tribes, it hosts 10 percent of the world’s languages.
For millennium the men of these remote highland communities wore what’s called a holim or penis gourd. Most men grew their own gourds according to their specific personalities. Some are curly and short while others are long and slender. By hanging a rock on the vine at its early stage of growth, the gourd can take on many different forms.
However, as we turn to the 21st century, no longer is the youthful generation holding steadfast to traditional culture. Dressed in jeans and T-shirts, dresses and blouses, many are sitting behind computers locked onto the Internet and reaching to the outside world for support.
In 2008, the National Committee for West Papua (abbreviated KNPB or Komite Nasional Papua Barat) was established. It is a Papuan peoples’ organization campaigning in a nonviolent way for a referendum regarding the right to self-determination. KNPBbranches are established in almost all regions of West Papua. In April 2009 protesters were killed by police during a demonstration in Jayapura (the capital of West Papua) organized by the KNPB that involved more than 15,000 people. The KNPBhas a strong international network.
Indonesia cannot afford to lose West Papua. It is a haven of natural resources, including the largest gold mine and third largest copper mine in the world, owned by Freeport-McMoRan, a U.S. mining company. Timber covers 85 percent of the territory, and huge amounts of oil have been located in the lowlands.
Papua is also becoming a land of opportunity for thousands of transmigrants from over-crowded islands such as Java and Sulawesi. The Indonesian government offers a few hundred dollars and a plot of land to make a new life for the settlers in hopes that they will adjust to this lost world.
As I traveled through this province from the highlands of Wamena to the lowlands of Agats, I couldn’t help but notice that most kiosks, hotels, and store owners were Indonesians from Java, their staff also Javanese. Papua has become the land of opportunity, but not for the locals who more often than not are found to stand in the way.
Heading to Papua is no easy task. Once in Bali, I find a domestic flight with Lion Air to Timika, a six-hour journey. From Timika it’s another hour to Sentani. My first visit to Sentani was in 1988 when it had three hotels and a restaurant called Mickeys. Things have changed since then. Malls, Dunkin’ Donuts, four-star hotels, and lattes with whipped cream now await your arrival. The streets are busy with traffic. I patiently sit in a taxi on the way to the airport. This will be my last flight, with Trigana Air, into the highlands of Papua, a 45-minute journey.
I’m excited to see my old friends. Five years have passed since my last visit. As the plane touches down in Wamena, I am greeted by Tepi, my oldest friend and Papuan brother. He still reminds me to keep an eye on my luggage. Soon after, I meet Tinus and Nius. Tepi tells me that Nadius and Lyndie have died, two other close friends. The news reminds me of just how fragile life is in Papua.
Malaria, pneumonia, and now AIDS are some of the dangerous killers that engulf Papua. And with hospitals and clinics being few and far between, their percentage of survival once infected is low.
However, the fear for most all Papuans does not lie in the possibility of contracting these diseases but more in being confronted by the Indonesian military and police, which rule this land through force and corruption. Hundreds of thousands of Papuans have died since the 1960s when Indonesia first took control. And backdoor deals with multinationals occur frequently on a land covered in natural resources.
What will be Papua’s fate? Only time will tell. But as I write this, thousands of Papuans are sitting behind computers strategizing their future. A future that has brought them from the Stone Age to the 21st century overnight, and a determination to decide their own fate, peacefully.

Jakarta (ANTARA News) - The Indonesian government has refuted the statement of Solomon Islands prime minister that the country has joined the Melanesian Spearhead Group merely to protect its own interests."We firmly reject the statement of the Solomon Islands Prime Minister, Manasseh Sogavare, that appeared on the website of the prime ministers press secretariat on May 17, 2016," the Indonesian foreign affairs ministrys director general for Asia Pacific and Africa, Desra Percaya, stated in a press statement received here on Saturday.The prime minister of Solomon Islands, in the statement on the aforesaid website, had posited, "The extension of full membership status to the United Liberation for West Papua (ULMWP) in the Melanesian Spearhead Group (MSG) could be justified because Indonesia has also sought to seek a membership status in the regional grouping to protect its own interest rather than seeking to be involved in a dialogue about serious human rights issues in West Papua."Responding to Prime Minister Sogavares statement, Desra Percaya made it clear that the statement was against the basic principles of sovereignty and non-interference as included in the agreement for the establishment of MSG in 2007.Desra underlined that the worlds third biggest democracy, Indonesia considers respect for human rights an important principle.In view of that, he recalled, Indonesia has ratified eight out of nine of the main human rights instruments of the UN and cooperates in various human rights mechanisms."Indonesia hails the concept of human rights and is ready to share its experience with regard to promoting and protecting human rights with other countries, including Solomon Islands. That is why Indonesia has always welcomed the participation of Solomon Islands in the Bali Democracy Forum," he elaborated.Desra reiterated that Indonesia has long been committed to overcoming the issue of human rights violations through the establishment of the National Commission on Human Rights (Komnas HAM) representative office in Papua. He reminded that Komnas HAM offices at the national and regional level have continued to work to resolve any alleged cases of human rights violations in Papua.As part of the Pacific region, Indonesia has also partnered with several key countries in the region to forge strong and productive bilateral relations, he added.It has also actively participated in various regional groupings, such as the Pacific Economic Cooperation Council (PECC) since 1980 and the Asia Pacific Economic Cooperation (APEC) forum since 1989. Also, it has been active in the Pacific Islands Forum (PIF) since 2001 and the Pacific Islands Development Forum (PDIF) since 2014."So, it is rather myopic for Prime Minister Sogavare to speculate that Indonesias agenda in the Pacific, moreover regarding MSG, is solely Papua-centric," he argued.He maintained that Indonesia remained committed to contributing to the MSG, further solidifying the relations between the governments, communities and peoples in the region.Indonesia is also committed to strengthening cooperation, jointly overcoming the challenges, deepening the economic relations and development related cooperation for the welfare and future of the nations in the MSG region."These facts must awaken Sogavare prime minister to understand clearly the reality and the truth," he concluded.(*)
————————————————————————————-
Posted by AWPA Sydney News at 2:08 PM