A few weeks ago, we heard from Catholic nun Susan Connelly who helped lead a church fact-finding mission to the Indonesian province of West Papua. Her report included allegations of widespread torture and harassment by Indonesian police and troops and even a “slow-motion genocide” of indigenous West Papuans.
The West Papuan independence leader Benny Wenda has been in Australia this week meeting supporters and a handful of politicians. Benny Wenda had an almost action-movie style escape from an Indonesian jail and he now lives in exile in Britain.So why should the churches in particular, care about the fate of his people 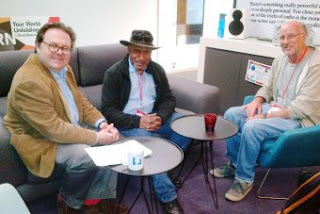 Subscribe to The Religion and Ethics Report on iTunes, ABC Radio or your favourite podcasting app.
—————————————————————————
http://dailypost.vu/news/papuans-reject-jakarta-statement/article_50dc4e2c-d0fe-5bad-ae5b-9befb0b66716.html
2) Papuans reject Jakarta statement
Posted: Wednesday, May 25, 2016 8:00 am
By Len Garae |
West Papuan Leaders, through the Vanuatu Free West Papua Association in Port Vila, have rejected the Indonesian government’s statement against the Prime Minister of the Solomons, Manasseh Sogavare as a blunt lie.
Jakarta through Antara news agency said it was not true what Prime Minister Sogovare said that the Indonesian government was interested to join the Melanesian Spearhead Group for its own interests “rather than seeking to be involved in dialogue about serious human rights abuses in West Papua”.
Responding to PM Sogavare’s statement, Indonesia’s Director General for Asia Pacific and Africa, Desra Percaya, made it clear that the statement was against the principles of sovereignty and non-interference as included in the agreement for the establishment of MSG in 2007.
Percaya stressed that as the world’s third biggest democracy, Indonesia considers respect for human rights an important principle.
Meanwhile as late as on last Saturday on May 21, West Papua’s social media network sent in shocking pictures of Christian church burning in Lany Jaya Regency, Wamena, in Highlands of West Papua.
If the pictures are not examples of human rights abuses allegedly by Indonesian authorities against West Papuans to worship in their churches, then a totally new phrase has to be invented to define the burning of these places of worship.
The network says these are examples of scores of human rights abuses that continue unabated in West Papua despite an international assurance by Indonesia’s President, Joko Widodo, that the situation on the ground in West Papua was improving.
In the latest development, a new sense of urgency is blowing in the wind with an increasing international pressure for West Papua to be debated by the United Nations, while the spokesman of the West Papua National Liberation Army (TPNPB), Sebby Sambom and Major General Terrianus Satto have spent a week in Port Vila and are boarding a flight out of Port Vila back to their home today.
Both men had also attended the all West Papua Reconciliation Conference in Port Vila which gave birth to the United Liberation Movement of West Papua in 2014.
However this is the first time for them to return on their own.
In an exclusive interview, they described their first such visit as satisfying after holding talks with senior representatives of the Free West Papua Association, Chairman of the Malvatumauri National Council of Chiefs, Chief Seni Mao Tirsupe and the Vanuatu Christian Council.
They wish to thank all Leaders of MSG and their people for their solidarity towards ULMWP.
They leave behind the following points for the Leaders of MSG as they prepare to attend their Summit in Port Moresby, Papua New Guinea, from May 29 to June 1.
• Indonesia cannot be a part of MSG. Geographically speaking, Indonesians are a different race and do not understand and feel what it means to be Melanesian.
• Call on Fiji and PNG politicians not to be swayed by [alleged] bribery.
• Stop Nick Meset and Albert Yoku from entering MSG member countries as they are [allegedly] paid by Jakarta as tools to lobby in favour of Indonesia. They are now in Fiji in the lead up to the MSG Leaders meeting in Port Moresby.
• West Papuans are dying, Melanesian Governments are urged to act now to help. After 54 years of suffering, West Papuans beg to be freed to enjoy their God-given freedom the way other Melanesian countries enjoy theirs.
• We plead for UN intervention as soon as possible as its former leaders were partly responsible for the very start of our suffering by recognizing Indonesia’s so called ‘act of free choice’ in 1961.
• We call on MSG to provide full membership of West Papua to its sub regional organisation because we are part of Melanesia through the Melanesian race.
• May God work through our Melanesian Leaders to grant West Papua full membership to MSG. Approximately 500,000 West Papua Melanesians have died for the same freedom that you our wantoks are enjoying, perhaps without realizing that for us West Papuans, it is the most valuable commodity that now our young people are dying for.
Meanwhile, yesterday the Jakarta Post, Indonesia’s daily English language newspaper reported that to resolve human rights cases in Papua, the biggest challenge for the government comes from the police and military, activists say, citing that both institutions are alleged to have been involved as perpetrators.
“It has been a major problem for us, because the state — especially the police and the military — is [allegedly] involved in those cases,” said Feri Kusuma, the impunity monitoring division head of the Commission for Missing Persons and Victims of Violence ( Kontras), on Monday.
According to a report released by Komnas HAM (The National Commission on Human Rights- an independent institution in Indonesia) in March, rampant human rights violations occurred in Papua during the first year of President Joko “Jokowi” Widodo’s administration, which started in 2014, including the arrest, torture and murder of at least 700 civilians, Jakarta Post reported.
Cited cases include shootings in Yahukimo, Dogiyai, Tolikara and Timika regency, the newspaper said.
It further reported that Coordinating Political, Legal and Security Affairs Minister Luhut Pandjaitan recently said that the government would resolve 12 human rights cases in Papua by the end of this year, cooperating with both the National Police and the National Commission on Human Rights (Komnas HAM).
Feri, however, told the Jakarta Post that the government are likely to face serious problems, internally, because many people from the police and the military now serve as government officials. “People [from those institutions] have considerable authority. This is our biggest challenge,” he added.
Posted by AWPA Sydney News at 2:04 PM