2) Difficult Times For MSG But Future Looks Secure Still
3) Airport in Papua to pay for use of customary land
4) Press release from legal team for the collision which killed Robert Jitmau
————————————————-
https://www.greenleft.org.au/node/61851
1) West Papuan leader appeals for support in freedom struggle
Saturday, May 28, 2016
By Duncan Roden 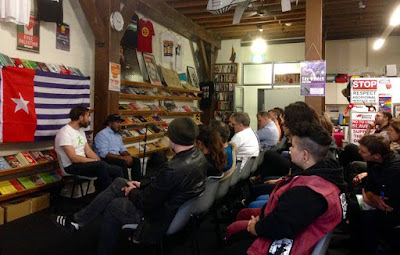 Benny Wenda addressing public forum in Sydney. May 24.
West Papuan independence leader Benny Wenda has been touring Australia, spreading awareness of the West Papuan struggle for freedom from Indonesian rule.
The tour of Wenda, the spokesperson for the United Liberation Movement for West Papua, comes ahead of a meeting of the Melanesian Spearhead Group (MSG) in Port Moresby, where an application for full membership to the group for the ULMWP will be considered.
Wenda spoke at a public meeting organised by Green Left Weekly in Sydney on May 24. He told the meeting: “Australia is a very close neighbour [but] nobody knows what [is] really happening, what [is] really going on.
“My trip is about breaking silence.
“People of West Papua cry for justice, for their environment, for their nature, for their human rights for 50 years … This fight to preserve our culture, our identity, who we are, our nature, our forest, our mountain.”
West Papua had been a Dutch colony from the 19th century until occupied by Indonesia in 1963. The territory was formally incorporated into Indonesia in the 1969 Act of Free Choice — a referendum in which only 1026 hand-picked people were allowed to vote.
Wenda told the audience about his personal awakening to the brutality of the Indonesian occupation. When he was a young boy, he watched as Indonesian soldiers raped and beat his mother and two aunts, aged 14 and 16. Wenda's aunts died from the trauma of the attack.
“I couldn't do anything at the time, just cry for my mum and my aunties … So that my sentiment [growing up was] to fight this. I don't want another girl to be raped,” said Wenda.
Rapes and random beatings were not the only abuses Wenda witnessed. “In 1999, my people chose me to become a tribal leader, and then I see it around me: Indonesian military logging. Logging is big business in West Papua, run by the Indonesian intelligence and military, not ordinary people.”
Wenda said people who try to protect their land against destructive logging and mining operations are labelled separatists. “You cannot defend your land, your forest … everything is run by Indonesian military, not the government.
“We know that Indonesia now calls itself a democratic country. But I don't know, maybe in other part of Indonesia ... West Papua is a militarised zone. They see West Papua as a colony so they can do whatever they like.”
Wenda said West Papua's forests are important in the fight against climate change. “We need to preserve all those forests [that] can protect this environment.”
Wenda singled out the Australian government's role in the occupation of West Papua, noting: “My uncle Mako Tabuni was killed by Detachment 88, trained by Australia.”
Tabuni was a leader of the National Committee for West Papua. Detachment 88 is an Indonesian counter-terrorism police unit funded by Australia and the United States.
“Our right to be free people [is] taken away by big power, supported by big powers like Australian government, Britain, America and European countries,” said Wenda.
Wenda celebrated a recent win for West Papua. At a meeting of the International Parliamentarians for West Papua in London on May 3, British Labour Party leader and IPWP co-founder Jeremy Corbyn said: “I want these issues to become central to our party's policies in the future and above all I want to see an end to environmental degradation and destruction and the right of people to be able to make their own choice on their own future.”
Wenda said: “Now we are calling on the international community to provide a vote. This is the highest agenda we are pushing.
“The root problem is what happened in 1969. The fact that [Corbyn] said this [should be] adopted as policy, that's great.”
But the outcome of an upcoming MSG meeting in Port Moresby to consider the ULMWP's membership is uncertain. Fiji and Papua New Guinea have tended to support Indonesia's membership in the group, and downplayed the significance of the ULMWP. In contrast, other MSG members such as Vanuatu, Solomon Islands and the Kanak Socialist National Liberation Front have supported the West Papuans' bid for recognition.
“It's an issue right here in the Pacific … ordinary people already own this issue and run it,” said Wenda. “But the government level, I understand the Fiji and PNG position.
“They're trying to rebalance their position because of diplomatic ties and trade. For me, I don't want to judge who is right, who is wrong [but at] the human level, they're embarrassed.
“But we belong to Melanesia and are entitled to full membership.”
Speaking about the challenges West Papua would face as an independent nation after liberation, Wenda said: “West Papua is a very rich country. How in the future can we stand on our own feet? I don't know, but we ready.
“Of course multinational companies are already there. First they need to understand our lifestyle. We're not really interested in the gold. The main thing they need to respect is our land, our sovereignty is our main issue.
“My people can decide what is good for them or bad for them, because they have seen it, many, many examples they have seen. It's always been all about money, about gold, about timber, about oil. We will really need all solidarity to help us to stabilise all this when West Papua is independent.”
Like the article? Subscribe to Green Left now! You can also like us on Facebook and follow us on Twitter.
———————————————————
http://fijisun.com.fj/2016/05/28/difficult-times-for-msg-but-future-looks-secure-still/

Robert Jitmau, a  respected Papuan activist who fought for the rights ofPapuan women market traders, died in the early hours of May 20th, afterbeing hit by a car. While the incident may have been entirelyaccidental, many people in Papua are concerned that the police haveassumed this conclusion before conducting a proper investigation toeliminate the possibility that his death was deliberate.The press release translated below, from the legal team following up theincident, can be read athttp://papuaitukita.net/polisi-segera-selidiki-kasus-penabrakan-robert-jitmau/Police should investigate the collision which killed Robert Jitmau now.Press ReleaseLegal team for the case of Robert Jitmau, killed in a car crash.Jayapura, 27 May 2016 - On the morning of 20th May 2016, Robert Jitmau died after being hit by an Inova car bearing a police numberplate DS1497 AO) on an entrance to the ring road in Hamedi, near Jayapura. the crash, Robert Jitmau had been picked up from Entrop by Yusup
Sraun and Alpius Jitmau, and then went towards Dok V and afterwards to the TVRI station in Bhayangkara. From Bhayangkara Robert and his two friends went to the Hotel Aston where Yusup Sraun got out of the car tomet Krispus Kambuaya at the hotel. The four men then went towards Entrop and then to the ring road. They used two cars, with Crisps Kambuaya travelling alone.Shortly after arriving at the ring road, Robert Jitmau called two companions, Nehemia Yarinap and  Melianus Duwitau, asking them to come to the ring road. Shortly after 04.00am the two friends arrived at the Ring Road on motorbike taxis. Robert sat down and chatted to them. The crash which killed him took place shortly afterwards.The police have told local media that the crash which killed Robert Jitmau was completely accidental. They have also stated that they have questioned witnesses Yusup Sraun, Krispus Kambuaya, Nehemia Yarinap and Musa Rujatobi, as well as three people believed to be responsible for the crash: Herep Patay (the owner of the vehicle with police numberplates DS1497 AO), Ronald Edwin Metiaman and Dolfinus Abraham Sefia.
In the police statement to the media the police didn't mention that:1. There was a fight between one of Robert's friends, Nehemia Yarinap, and someone who got out of the car that crashed into him.2. The police have not yet questioned another friend, Melianus Duwitau, who was at the incident location. Melianus Duwitau is still being treated in the Dian Haarapan Hospital as he was also injured in the crash.
3. Also, the whereabouts of Alpius Jitmau are still unknown, even though he was a witness who was present when the incident took place. Unfortunately however, the police have been too fast to draw theconclusion that Robert Jitmau's death was a purely accidental traffic collision, even before all the witnesses to the incident had been questioned.The police have been given the authority to unearth the facts, and have a duty to conduct a full and professional investigation, prioritising the truth and justice over all other interests.Because of this, the Legal Team for the Robert Jitmau case are asking the police to carry out a thorough, full, comprehensive and transparent investigation of this case before coming to any conclusions about thecollision which killed Robert Jitmau.
Posted by AWPA Sydney News at 3:35 PM