1) Moves to remove Indonesia from MSG

2) Steven Itlay Insulated and Jam Besuknya Just 10 Minutes
—————————————————————————-
http://www.pina.com.fj/index.php?p=pacnews&m=read&o=15597309305747867c5a68dc6f7911
1) Moves to remove Indonesia from MSG
Vanuatu will seek Indonesia's removal from the Melanesian Spearhead Group (MSG). This is despite the tactical rescheduling of the meeting for a second time. Charlot Salwai - Vanuatu's Prime Minister - is expected to lead the bid to remove Indonesia with the support of his Solomon Islands counterpart, Mannasseh Sogavare. The revelation comes after Papua New Guinea Prime Minister Peter O'Neill said his government was concerned about human rights abuses in West Papua. O'Neill said he had expressed PNG's concerns directly to Indonesia's President Joko Widodo. O'Neill made the comment on FM100's radio talk back show while responding to questions from the public about West Papua. “We are equally concerned about what is happening in West Papua,” he said. “We have expressed that directly to the highest authority including the President this year particularly the human rights issue and for autonomy.” O'Neill said he had written, as chair of the Pacific Islands Forum to President Widodo asking for a regional fact-finding team of leaders to visit West Papua to talk directly with the people themselves. “The response we received from Indonesia is they welcome such a dialogue and appreciative of our desire for West Papua have some more autonomy, whether that will be self-determination or not is something that can be worked on towards,” he said. The MSG Leaders Meeting has been postponed to a later date.SOURCE: ISLANDS BUSINESS/PACNEWS
————————————————————-
A google translate. Be-aware google translate can be a bit erratic.
Original bahasa link at
http://suarapapua.com/2016/05/26/steven-itlay-diisolasi-dan-jam-besuknya-10-menit/
2) Steven Itlay Insulated and Jam Besuknya Just 10 Minutes
MAY 26TH, 2016 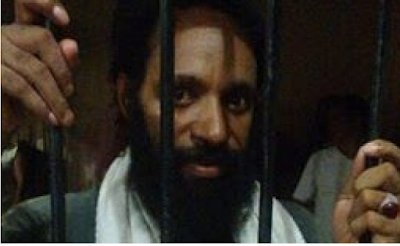 JAYAPURA, SUARAPAPUA.com- Chairman of the West Papua National Committee (KNPB) Center, Agus Kossay to suarapapua.com revealed, steven unsafe conditions. Because isolated in a room without ventisali and are hard to get air and covered, in addition to visiting hours and Yus Steven Wenda is only limited to 10 minutes.
"Visiting hours for inmates in prisons can usually full day. But for Steven and Yus is limited to 10 minutes. It's weird. In addition kelaurga would come bersuk also very limited. Since two weeks ago, Steven was also complaining of pain. Conditions in jail are highly insecure, "said Agus Kossay to suarapapua.com, on Thursday (05/26/2016) from Jayapura.
According Kossay, Steven did not commit any crime. But in prison he is treated differently and it's very discriminatory. Families were also given access to the visiting Steven.
"Seteven did not commit any crime. But in prison Steven treated like terrorists and criminals. Even kelaurga tomorrow I just can not. Have given just 10 minutes, can not dibesuk by the family. Only one or two people who can only tomorrow. When a clock tomorrow, supervised equally officer. The country is getting weird. We ask that steven and Yus released unconditionally. No element of treason and crimes that they make, "said Kossay.
Earlier, activists KNPB Timika, Reports the Sony Tabuni, Steven, had been imprisoned in detention (Rutan) Brimob Mimika in Mile 32, the condition of the West Papua National Committee (KNPB) Region Timika, Steven Itlay reportedly worsened. He suffered health problems due to poor prison room. Meanwhile police restrict access to families and relatives to visit.
"She looks very pale, his body limp, lack of blood, and chest aches, and access to it is severely restricted by the authorities," said Sonny Tabuni, one of the administrators KNPB suarapapua.com Timika when contacted this afternoon, Monday (16 / 5/2016) ago.
According to the new Sonny Steven Itlay visit on Friday (05/13/2016) then, Steven isolated in a room that is not feasible. He was locked in a room without sunlight. In fact, according to Sonny she is not criminals or terrorists.
Meanwhile, Gustav Kawer, lawyers said Steven Itlay justify Kossay. Steven received a portion of time away from the existing rules. According to the rules, prisoners have time tomorrow from 9 am to 12 noon but Itlay not obtain it.
"True, Steven can only be ten minutes," said the journalist Kawer Jubi in Abepura on May 21, 2016.
Gustav added that police also banned Steven communicate with the local language. Visitors are only allowed to use Indonesian to communicate with Itlay.
"Families who visit prohibited from using disposable Dani language," said Kawer like diansir Jubi on Wednesday (05/25/2016) yesterday.
He said, the physical condition of Steven decline in custody. Moreover, increasingly pale skin because of being in enclosed spaces and diet. Steven eat only twice a day. afternoon and evening. "Morning Steven not being fed," he said.
---------------------------------
Posted by AWPA Sydney News at 3:05 PM