2) Govt to settle all human rights cases in Papua 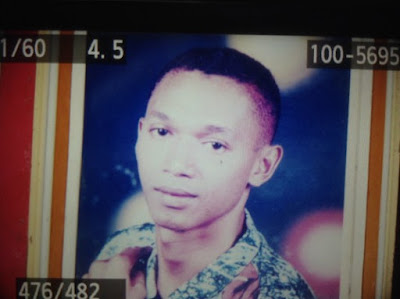 Aristoteles Masoka – Jubi
Jayapura, Jubi – Papua Police have been urged to investigate the disappearance of Aristoteles Masoka, the driver of late Theys Eluay who was killed  by Special Force members on 18 November 2001.
“The murder case of Theys Eluay is already closed because the perpetrators have already been punished. But the case of missing Aristoteles still remains a question until the Papua Police asked for an investigation,” said the First Deputy of the Ministry of Political, Legal and Security Affairs Major General Yoehi Swastono in Jakarta on last week.
He explained the order to conduct an investigation was decided as the result of a limited discussion about the documentation of human rights cases at the Ministry of Political, Legal and Security Affairs office in Jakarta in last April.
Separately, Commissionaire of Indonesian Human Rights Commission Sandra Moniaga justified the decision to investigate the missing of Aristoteles Masoka. According to her, the Human Rights Commission, the Indonesian Police and the Ministry of Political, Legal and Security Affairs have recorded 12 cases of human rights violations in Papua, which must be resolved.
“Mapenduma and Biak cases would be resolved politically through approval of the Indonesian House of Representatives, while Wamena and Wasior case would be solved under the Law 26 Year 2000, but the reconstruction of the cases must be redone. The investigation on Paniai case still continue, while some cases has been done or under legal process. And the Aristoteles Masoka case is quite unique. Papua Police Chief and Military Commander were requested to conduct an investigation on this case immediately,” said Sandra Moniaga on Tuesday (17/5/2016).
Aristoteles’ father Yonas Masoka said his son was missing at the age of 21 years old. At that time he was a student of the second semester at the University of Jayapura Sains and Technology majoring construction engineering. He decided to work to not burden his parents by becoming Theys’ personal driver.
“Lady, I and the Lord (late Theys Eluay) was kidnapped,” said Yonas Masok memorizing the last words of his eldest son Aristoteles Masoka before missing. He added these last words were delivered to the late Eluay’s wife  Jeanike Ohee by mobile phone. “He was only a driver. He has nothing to do with Mr. Eluay’s politic,” said Yonas Masoka. (*)
————————————————————————————————
http://www.antaranews.com/en/news/104757/govt-to-settle-all-human-rights-cases-in-papua

2) Govt to settle all human rights cases in Papua

Jakarta (ANTARA News) - The Indonesian government is committed to resolve all human rights cases in Papua by the end of this year, a senior minister said here on Wednesday."I am optimistic that the human rights cases in Papua will be settled this year. The people of Papua also wish to settle the cases (and) the government will facilitate it," coordinating minister for political, security and legal affairs Luhut Binsar Pandjaitan said.He informed that he would also involve the commander of the defense forces (TNI) in the efforts to settle the cases."I do not care about the identity of the perpetrators. We will disclose all the existing information and the identity of whoever is wrong, and we will punish him," he declared.A commissioner of the National Commission on Human Rights, Imdadul Rahmat, has said that resolving these cases should become the long-term commitment of all parties."They must commit to enforce human rights in Papua so that such cases do not recur. There must be more approaches for a dialogue to deal with political stability in Papua so that Papua can enjoy real and everlasting peace acceptable to all," he explained.He advised that the settlement of the 12 human rights cases in Papua by the government by the end of this year must also comprehensively cover other aspects, besides social and political, such as land rights, traditional community rights and the welfare of the people of Papua.All the parties involved must be in unison with the government so that no institution later claims it had a different view on the matter."Such commitment must be enforced through law. We must not do things in a half-hearted fashion. We have often said that we carry no burden. We must remain open," he argued.The settlement of the human rights cases in Papua is very important. Rahmat stated that besides proving that Indonesia is more democratic, such a move is necessary to safeguard the integrity of the unitary state of Indonesia."Each case takes its own time to reach a solution and faces its own peculiar set of difficulties. We wish all such cases are settled this year," he explained.(*)
——————————————————————————
http://tabloidjubi.com/eng/jayawijaya-faces-humanitarian-emergency-says-father-john-djonga/
3) Jayawijaya Faces Humanitarian Emergency, says Father John Djonga
17 May 2016 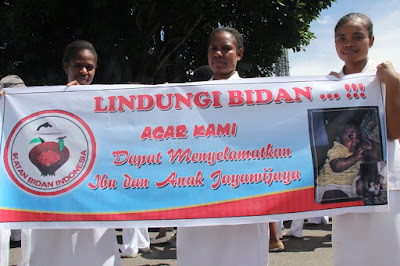 Nurses held a protest in Jayawijaya regency – Jubi
Wamena, Jubi – Yap Thiem Award 2009 winner Father John Djonga warned that Jayawijaya Regency is facing a humanitarian emergency following a demonstration by midwives and other health workers in Wamena on Friday (13/5/2016).
The protestors urged the Jayawijaya Government and Police to immediately provide a security guarantee for health workers because they are vulnerable to sexual harassment and rape.
Father Djonga asked both Local Government and Police to respond this situation immediately.
“I respect and support what they (midwives) have done,” he told Jubi in Wamena, Jayapura on Monday (16/5/2016).
He said at least there are 37 cases of sexual harassment and violence towards the medical staffs working at the villages. The Police, Customary Community and the Church decided to be silenced towards this issue. “Currently the situation in Jayawijaya is on alert. The humanitarian workers such as nurses, midwives or teachers and others feel being threatened,” he said. According to him the threat of rape or murder towards medical staffs indicated the authority has failed to protect their people.
“If the midwife was not there, the mortality rate of mothers and children might be even higher. It means the population of Papuans is threatened. So, I hope the Customary Community, the local figures to protect the medical staffs, teachers and other humanitarian activists,” he said.
He said if the government wants to eliminate the mortality rate of mothers and children, they should protect the medical workers as well as the teachers. “Stop the bad behaviors to pretend drunk or threat to do violence or even to kill,” he said.
Jayawijaya Police Deputy Chief Commissionaire Fransiskus Elosak said the Police have invited the district chiefs related to the attempted rape against a midwife at Libarek, Pisugi and Witawaya sub-districts. They were asked to help the Police in revealing the case by reporting the perpetrators to the Police. “If they couldn’t take the perpetrators to the Police, they must provide information to us. We are ready to arrest the perpetrators,” said the deputy chief.
He said the number of Police personnel at Jayawijaya Police is limited although there is ‘One Police One Village’ Program of the Indonesian Police to ensure the security. Therefore he expected the replacement of medical staffs to be reviewed and coordinated with the sub-district chiefs, village chiefs and community leaders to obtain protection and security assurance from the local community. (Islami Adisubrata/rom)
———————————————
Posted by AWPA Sydney News at 1:08 PM