Media release-AWPA calls on the Australian Foreign Minister to condemn the arrests in West Papua.

The Australia West Papua Association is calling on the Australian Foreign Minister Julie Bishop to condemn the arrests of peaceful demonstrators in West Papua.
As many as 178 activists from the West Papua National Committee (KNPB), the Regional Parliament (PRD) and the students were taken to the City Police Resort (Police) Jayapura today the 2 May.
The rallies were called to show support for the meeting of the International Parliamentarians for West Papua (IPWP) in London on 3 May  and to  support the  action by the people and government of Vanuatu who  supports ULMWP to be a full  member of the MSG.  In Sorong  27  Peaceful Demonstration,  Members Of The KNPB Were Arrested. Journalists trying to cover the peaceful rallies were forbidden to do so.
The KNPB in particular have been a targeted of the security forces in the past month with its members being arrested at rallies on the 13 and 29 April.
Joe Collins of AWPA said “its about time that governments stopped repeating the mantra of ‘human rights abuses are a thing of the past and Indonesian is now a democracy'. The continuous arrests of peaceful demonstrators, intimidation of human rights defenders and journalists prove otherwise”.

The international community has to realise that the issue of West Papua is not going away. The recent rally in Port Vila calling for full membership for West Papua at the MSG shows this. A civil society organisation (CSO) forum was also officially opened  in Vila yesterday

The AWPA calls on Julie Bishop to raise the crackdown by security forces on the latest peacefully rallies in West Papua with Jakarta. The crackdown on West Papuans right to freedom of speech and freedom to demonstrate. AWPA also urges the foreign minister to pressure Jakarta to allow a PIF fact finding mission to West Papua, to listen to the tragic stories the West Papuan people have to tell.

ends.
Reports from local media below. 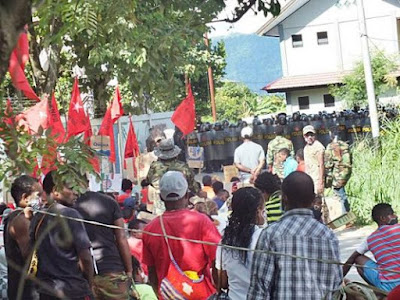 Before the police secured the mass action was in front of the gate Uncen Waena, Monday (02/05/2016) - Jubi / Abeth You
Jayapura, Jubi - As many as 178 more activists West Papua National Committee (KNPB), the Regional Parliament (PRD) and the students were taken to the City Police Resort (Police) Jayapura.
The arrest of the activists in front of the gate of the campus of the University of Cenderawasih (Uncen) Jayapura, Papua, on Monday (02/05/20160) because staged a referendum campaign support and support for the meeting of the International Parliamentarians for West Papua (IPWP) in London, May 3, 2016 and support for action by the people and government of Vanuatu that supports ULMWP entered as a member of the MSG.
"100s over aktvis KNPB arrested are now taken to the Police. Police officers of the Police and the City of Jayapura Papua Police re-arrested a number of activists KNPB at 09.00 WPB in front of the gate Uncen Housing III Waena, "said General Secretary KNPB Centre, Ones Suhuniap to the Jubi in Jayapura.
Ones said, a number of KNPB activists are confronted by authorities with full force and do not allow demonstrations.
"The arrest is the chairman of the KNPB puast secretary Agus Kossay and I KNPB Mecky Yeimo Center. KNPB spokesman bazookas Center logo was also arrested along with several other KNPB activists. Their names will follow, "he explained.
Moreover, he continued, the Chairman of the KNPB Sentani region and a 5 Agus Bahabol KNPB members arrested Police in Sentani and Jayapura regency directed to the police station in Doyo Sentani.
—————————————————————————————————————————-
http://tabloidjubi.com/2016/05/02/aksi-dukung-ulmwp-27-aktifis-knpb-sorong-ditangkap/ 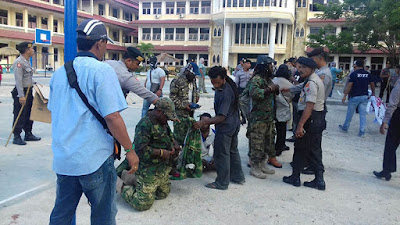 A Total Of 27 People KNPB Activists Were Arrested When Sorong Kingdom Will Hold A Rally On The Lawn Of UKIP Malanu Sorong City Monday (02/05/2016), About Pkl.8.00 WP. They Forcibly Disbanded By The Combined Forces TNI / Polri. To 27 People Are Still In Mapolres Sorong City In Order To Undergo The Examination.

Spokesman KNPB Sorong Raya Augustine Aud Confirmed Mengukapkan Her Disappointment Over The Attitude Of The Security Forces Who Rated Silencing The Democratic Space In The Land Of Papua.

"I Personally Feel The Democratic Space In The Tight-Lipped On This Land," He Said.

Director Of The Manokwari LP3BH Yan Warinusi Rate The Police Has Hurt The Democratic Values ​​By Holding This KNPB Angora.

"I Strongly Deplore The Arrest Of 27 Activists Of The KNPB Sorong. It Hurt Democracy In This Country, "He Said.

City Police Chief Superintendent Sorong. Karimudin Confirmed Ritonga Said The Reason For The Dissolution Because They Want To Take Action Secession With NKRI, So In Value Contrary To The Principle Of Sovereignty NKRI. The 27 Activists KNPB Use Mobile Baracuda Escorted To The Police Station.

"They Wanted To Hold This Event, Impose Themselves And Do Not Want To Be Dissolved So That We Take Decisive Action," Said The Police Chief.

In Addition To Grasp Their 27 Activists, Including The Chairman And Spokesman Kamtius Heselo KNPB, Police Also Demolished KNPB Secretariat And Securing Dozens Of Attributes Papua Merdeka. (*) 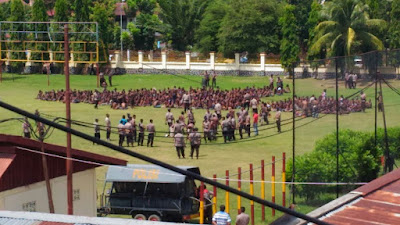 Watched Jubi, hundreds of demonstrators gathered in the field Mako Brimob Kotaraja. They were told to remove tops and footwear and then dried in the sun, around 12:15 Papua time.

Some members of the media in Jayapura including Tabloidjubi.com current location came from outside the field, directly confronted the police officers stand guard along the fence Mako Brimob, approximately 100 meters. Members who guard outside the fence about 20 people by holding the timber and forbid everybody to stop.
Journalists who want to record images in the mass of the field is also prohibited.

One member of Brimob who were on duty at the checkpoint said it had banned all members of the media to cover the detention of protesters in the open field that sweltering afternoon on direct orders Head of Unit (Adj) Papua Police Mobile Brigade, Sr. (Pol) Mathius Fakhiri.

Demonstrators were detained in several locations such as Expo, Housing 3 Waena and Abepura circle, before being taken by truck to the field Mako Brimob police. (*)

Police Interrogation A researcher from Bern University In Demo KNPB 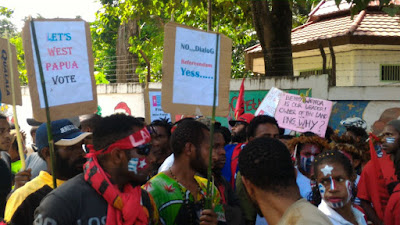 Jayapura, Jubi - Cypri Jehan Paju Dale researchers from Bern University in Switzerland held by police in Papua, while at the demonstration site of the Papuan people at the gates of the campus of the University of Cenderawasih, Housing 3, Jayapura, Monday (02/05/2016).

The arrest occurred about 10:15 Papua time.

The testimony of a witness mentioned that Cypri when leaving the site of action, eight policemen dressed completely blocks.

"About eight policemen stand him. One police carry batons and shields. They take it to the car Strada black, "one man told Jubi on condition of anonymity.

Strada's car plate number DS 8412 SR, which was parked between cars and other police truck.

Cypri contacted Jubi confirmed the he was interrogated by the police.

"He. I was quizzed by them (police), "said a brief Cypri.

After interrogation, Cypri then released by police who blocked and mengonterogasinya it.