The official transmigration programme is not active anymore in Papua region, according to an Indonesian government official.
Transmigration is the relocation of people from crowded parts of Indonesia to more sparsely-populated regions of the republic like Papua, the easternmost province bordering Papua New Guinea.
Papua's provincial Governor, Lukas Enembe, recently spoke out about the devastation which "transmigrasi" continued to inflict on his people, culturally, economically and demographically.
Listen to an interview with Atmadji Sumarkidjo on Dateline Pacific3 min 36 sec
But Atmadji Sumarkidjo, from Indonesia's Ministry of Politics, Legal and Security affairs, said that Indonesians were migrating to Papua of their own volition, in search of opportunity.
He said it was no longer a state-sponsored programme.
"We are not continue those programmes that belong to the past governments, previous governments," said Mr Sumarkidjo. "Now we like to give more challenges to the local people to develop themselves. So we already stop the transmigration programme."
Mr Sumarkidjo said that in the last five years, Jakarta had spent almost US$20 billion to develop Papua region.
He said there were problems that still need addressing in Papua, but that the funds from central government were intended to have an impact among Papuan grassroots communities.
—————————————————————————-

By ADMIN | Published: MAY 24, 2016
[awasMIFEE note: as the indigenous people of Sorong, Nabire, Merauke and elsewhere around Papua continue to resist oil palm expansion, there now appears to be some hope that the government is responding. It appears that President Joko Widodo’s comments last April that he was preparing a moratorium on all new oil palm permits are being followed up. Professor San Afri Awang, the Director-General of Forestry Planology and Environmental Governance, has stated that “We have rejected and terminated the licensing process for all new palm oil plantations submitted by 61 companies for an area of more than 851 thousand hectares.” All 61 applications were from Papua, West Papua and Central Kalimantan provinces.
The President is reportedly preparing a Presidential Instruction to give a legal framework for the moratorium. Of course, until this is published and we see how it is being implemented, it is not possible to know how much meaningful change this policy might bring] 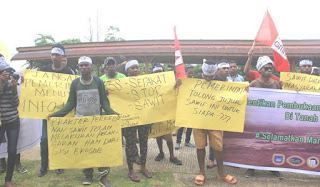 Hundreds of indigenous people and activists from a range of backgrounds, demonstrated at the Sorong Regency District Legislative Council to demand a stop to the expansion of oil palm which has already destroyed thousands of hectares of forest in the area.
This action is also to show their support for the central government which last month started talking about a moratorium on new land for oil palm in Indonesia.
“All work on oil palm plantations across Sorong Regency must be stopped, because thousands of hectares of the people’s forest has already been destroyed”, participants shouted out during speeches outside the council building.
The indigenous people and activists which have joined the movement to oppose land clearing for oil palm are comprised of young Moi intellectuals, the Malamoi Indigenous People’s Association and Moi people who care for the Malamoi forest, youth and student movements (GMNI, GAMKI, GMKI, the Association of Moi students in Sorong Muhammadiyah University (Himamus) and the Moi Students’ Association in Indonesia (Himamsi)). The action started on foot from the public ground in Aimas, the Sorong Regency capital.
The chair of the Sorong Branch of the Indonesian National Student Movement, Manu Mobalan stated that they were also opposing new land for oil palm as a protest against the behaviour of existing oil palm plantations in Sorong, which have destroyed the forest in the area.
“The oppression of ordinary people is increasing, which means we need a opposition movement to save the Malamoi forest. Investors do not look after the interest of oppressed people”, said Manu.
Wilson Mobalen, a demonstrator, stressed that all people should have the right to self determination in their home country, which means they can do withoutd oil palm.
“Our fate is not determined by oil palm but by God. Forest and Nature have taught and raised us. Oil palm is not the right recipe for Papuan people, especially the Moi people. God is the one who decides our fate”, he said.
The demonstration took place under the surveillance of hundreds of officers from the Sorong Regency police station. Once they had communicated their demands, the crowds dispersed in an orderly way.
Separately, Greenpeace forest campaigner, Richard Charles Tawaru said that essentially, the indigenous people’s demonstration had underlined that the community did not want any more oil palm expansion in Sorong Regency.
“The people have had bad experiences with oil palm, which has brought no benefits, but has caused the forest to disappear along with animals for hunting, and water sources are reduced,” Charles said when called from Manokwari last night.
The demonstrators used the example of two oil palm companies that are already operating in the area, PT Henrison Inti Persada, which started its plantation in Klamono in 2006 and PT Inti Kebun Sejahtera, which has been in the Salawati area since 2008.
The demo was also to show community opposition to plans to clear another 24000 hectares of land for oil palm in the area, which had already been granted an in-principle permit by the government.
The planned expansion would take place in Klaili, Klasow and Moraid sub-districts, by two companies from the same group: PT Mega Mustika Plantation has permits for over 9300 hectares and PT Cipta Papua Plantation has permits for over 15000 hectares.
According to Charles, these permits originated in the Sorong Regency Forest Management Unit(KPH) scheme which was suggested by the Sorong local government and agreed to by the forestry ministry. Chalres said that even the forestry ministry had granted permits for this vast new oil palm project.
Source: Cahaya Papua http://www.cahayapapua.com/tolak-ekspansi-sawit-masyarakat-adat-dan-aktivis-geruduk-dprd-sorong/
Posted by AWPA Sydney News at 2:02 PM