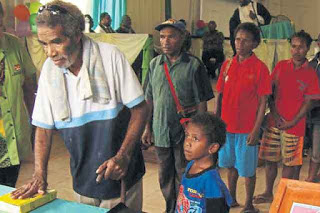 About 150 West Papuans received their Papua New Guinea citizenship in Kiunga, Western province yesterday after living as refugees  for more than 40 years in PNG.Acting chief migration officer Solomon Kantha said they could now vote in this year’s  elections if their names were on the PNG Common Roll.The West Papuans from Indonesia had crossed the PNG-Indonesian border when fleeing political persecution from the Indonesian government. They had fled after the Dutch colonial government had handed over Irian Jaya to the Indonesian government in the early 1960s to become the West Papua province of Indonesia.Citizenship Advisory Committee chairman and Telefomin MP Solan Mirisim said they were able to get their citizenship because the Government in November 2014 announced that West Papuan refuges would not have to pay the required K10,000 citizenship application fees.

“These ceremony marks a significant event and the first ceremony that recognise West Papuans who have sought refugees or asylum here in the 1070s and 1980s,” MIrisim said.“It provides you with identification to formally make you a part of this country.”West Papua is a province of Indonesia. Indonesia claimed the territory of the former Dutch East Indies so it invaded Irian Jaya in 1961.It was agreed in 1969 the UN should oversee a plebiscite of the people in which they would be given two choices: to remain part of Indonesia or to become an independent nation.This vote was referred to as the ‘Act of Free Choice’. But, the vote was conducted by consensus decision-making, or consensus of elders, numbering 1000 of these men had been selected by the Indonesian military.This body was coerced into unanimously voting to remain part of IndonesiaThe result of the compromised vote was rejected by Papuan nationalists, who established the Free Papua Movement .The National

——————————————
http://www.thejakartapost.com/news/2017/04/11/no-smelter-no-export-license-government-tells-freeport.html
2) ’No smelter, no export license,’ government tells Freeport
Fedina S. Sundaryani The Jakarta Post
Jakarta | Tue, April 11, 2017 | 03:31 pm
Energy and Mineral Resources Minister Ignasius Jonan said on Tuesday that the government would force PT Freeport Indonesia to revert back to its contract of work (CoW) should the mining giant fail to fulfill its promise of building a smelter in Gresik, East Java.
The company, a subsidiary of United States-based mining behemoth Freeport McMoRan, was recently awarded an eight-month special mining permit (IUPK), which will end in October. During this time, the miner is expected to continue negotiating disputed terms on its contract conversion, including issues of divestment and smelter construction.
The IUPK status maintains Freeport Indonesia’s right to export semi-processed metals, including concentrates.
“If the company insists on not building a smelter, it will have to return to its CoW until the contract expires [in 2021]. If the company doesn’t want [to build a smelter], it should just revert – but that means it can not export,” Jonan said on the sidelines of a seminar in Jakarta.
(Read also: Freeport gets red-carpet treatment, again)
Jonan issued on March 31 Energy and Mineral Resources Ministerial Decree No. 28/2017, a substitute to decree No. 5/2017 on adding value to minerals through domestic processing, just days before the ministry announced that it had awarded Freeport Indonesia the short-term IUPK.
Under the revised decree, the minister can award miners an IUPK once they submit a proposal to convert from their CoW.
The short-term IUPK may either last until the CoW’s expiry or a “specific time period to accommodate adjustments to continued operations.” (hwa)
Posted by AWPA Sydney News at 2:32 PM