1) Ambassador visited the Netherlands, the Office attended the Franciscan SKPKC intel at night 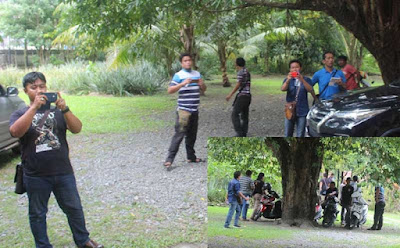 People dressed thugs allegedly photographing intel appear in the court of the Franciscan SKPKC Office - Doc. SKPKC
Jayapura, Jubi - Director of the Office for Justice, Peace and Integrity of Creation (SKPKC) Franciscan, Yuliana Langowuyo criticized the performance of the security forces who he said is very disturbing meetings between activists of Human Rights (HAM) Papua with the Dutch ambassador to Indonesia in the Office SKPKC Franciscan, City Sentani , Jayapura district, Tuesday (04/04/2017).
Yuliana to Jubi said Dutch Ambassador to Indonesia, Rob Swartbol during a visit to the office of the Franciscan SKPKC Papua, not only escorted by police with formal clothes (according to the procedure) but also people in civilian clothing who enter the office area SKPKC and do "gerakan- motion "unnecessary.
"Many people in plainclothes, we thought it was intel, come in. We felt uncomfortable, because the meeting was closed. They were in the back and side of the secretariat, also sat in the hall," said Juliana.
According to Juliana, people suspected of intelligence is the area around the office, trying to get out of the door that had been closed, photographing and come to the office again at night time.
"When they come at night, they wondered at the guard office. They asked what the meeting was about, ask your email address and contact number of activists who met with the ambassador as well," said Juliana.
Yuliana, although do not know the people in plainclothes that where, argues, in ways such as professional intelligence work and should not be criticized.
"It's unprofessional and should be criticized. Because there are police who mengkawal ambassador. We did not know they were from a unit where, whether police, military or State Intelligence Agency (BIN) but they were in plainclothes. They are willing to enter joined the meeting for what ? ' Yuliana asked.
Earlier, the Dutch Ambassador to Indonesia visited the Office of the Parliament of Papua and Papua legislators met some of them, Ferinando A.Y. Tinal, Laurenzus Kadepa, Elvis Tabuni, Mathea Mamoyaow, Orwan Tolli Wone, Deerd Tabuni, Syamsunar Rasyid, Emus Gwijangge, Wie Tan Long, Sinut Busup, Ignatius W Mimi, Nathan Pahabol and Yakoba Lokbere.
After the meeting, said the arrival Rot Tinal Ferinando Papua into a routine visit. The goal is to monitor the program and help given the Dutch government in economic development, strengthening the rights of women, water and agriculture.
"Members of the council also have to convey the aspirations. Among the violations of human rights, freedom of expression and a few other things," said Ferindando Tinal. (*)
————————————————————————————
http://thediplomat.com/2017/04/solomon-islands-seeks-balance-in-relations-with-indonesia-and-west-papua/
2) Solomon Islands Seeks Balance in Relations With Indonesia and West Papua
With the end of the RAMSI intervention and restoration of full sovereignty comes more difficult diplomatic balancing.
By Grant Wyeth April 05, 2017
Preparations are being made in the Solomon Islands for the mid-year transfer of power from the Australian-led Regional Assistance Mission to Solomon Islands (RAMSI) intervention force, which has policed the islands since 2003 after the country’s civil unrest, to the Royal Solomon Island Police Force (RSIPF).
Part of this restoration of full sovereignty in the Solomon Islands involves reestablishing international security cooperation to combat criminal activity, and the country is presently in the process of organizing an agreement with Indonesia. A draft Memorandum of Understanding (MoU) between the Royal Solomon Island Police Force (RSIPF) and the Indonesian National Police was discussed at recent meetings within the Melanesian Spearhead Group (MSG) structure, and it is expected to be signed soon.
The MoU involves cooperation in preventing, detecting, and combating trafficking of illicit drugs, smuggling, trafficking in persons, money laundering, arms smuggling, cyber crime, international and economic crime, and corruption.  There are also plans for Indonesian police to be involved in the continued training of the RSIPF.
Enjoying this article? Click here to subscribe for full access. Just $5 a month.