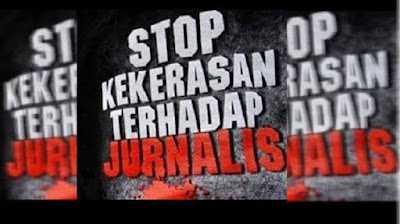 Illustration rescue campaign of intimidation of journalists anywhere. (IST - SP)
Yakuhimo, SUARAPAPUA.com - Four journalists who served in Dekai, Yahukimo, Papua, was banned from covering the activities of launching the first landing of the Hercules aircraft belonging to the National Army Forces (TNI-AU) in airports Nop Goliath Dekai, Saturday (15/04/2017) morning.
Kampung news reporters and Jubi who want to enter to do reporting, is not allowed by police officers on duty at the airport Dekai.
Herens Lokon, Kampung news reporter, explaining he and Jonathan Itlai, Kampung news editors, not allowed to cover.
"We two come cover. Up at the front entrance to the departure of two members of the police Yakuhimo, one named Raden said not allowed to enter and there is no warrant from the airport, "said Herens.
Such actions are regrettable because they hinder the work of journalists.
"We are on assignment to lift the name of the area through the media. The reason is not clear, probably because they do not know or do not understand the work of journalists? I am also confused by this ban, "he said.
Reporters in Yahukimo not much. Everything is original child Yakuhimo. Identity and clear journalistic activity.
"Maybe they just assigned, so I was forbidden entry to to cover," annoyed Lokon.
Piter Lokon of Jubi and Ardi Bayage of suarapapua.com also suffered the same fate. Both are not permitted by members of Brimob.
"I asked the clerk that the plane had come in, so we want to cover simultaneously capture having previously been the interview with the Head of the Department of Transportation Yakober Mandila ST, associated aircraft will land. But Raden, BriMobs remain firm, "said Piter.
Although officials ushered reporters covering the service, two officers in the fixed prohibit.
"I am upset with the actions of Raden and Amin. Disallow we went to cover, even though I had one more year job as a journalist in Yakuhimo. Society also know me from Jubi, possibly a member of the new bertugaskah? How strange, "he said, surprised.
Separately, Yakober Mandila, Head of Transportation Department confirms Yakuhimo never forbid journalists.
"We never told them. It was the actions of individual security. We were even more pleased because the media there to lift the name of this area. I do not forbid you to cover, "said Mandila.
Measures banning it regrettable Deputy Police Yakuhimo as impressed limiting the activity of journalists in the field.
According to him, the attitude of the members thus not justified. As a leader never forbade the press. Only the possibility that member while busy to serve people at the entrance.
"During this time never instructed our members banned journalists. It does not exist. We support each other, we're all good purpose, "said Wakapolres.
Just a note, the Air Force Hercules first landed on the airport Nop Goliath Dekai to support the acceleration of development in Yahukimo. Launching was held as part of a one-year leadership and Julian Heluka Busup Abock.
Announcers: Ardi Bayage
———————————
A google translate. Be-aware google translate can be a bit erratic.
Original bahada link at
http://suarapapua.com/2017/04/17/pesawat-herchules-mendarat-perdana-di-yahukimo/
2) Arriving air Herchules Prime Yahukimo
By
Ardi Bayage
-
April 17, 2017
Yakuhimo, SUARAPAPUA.com- Herchules aircraft owned Indonesian Air Force has landed premiered on Saturday (04/15/2017) at the airport Nop Goliath, Yahukimo, Papua.
The inaugural flight carried out with three different flight route. Jayapura - Dekai, Dekai - Merauke and Timika - Dekai.
Yakober Mandila, Head of Transportation Yakuhimo say, does the contract between the government Yakuhimo with the Air Force's Hercules aircraft are due to be forward Yakuhimo economic center in the central mountains. He said, for there perhubungannya track Yakuhimo land, river and air.
"The conduct of this cooperation agreement is the policy of the district government. Yakuhimo. Already a year regent Abock Yakuhimo and our lead in the Transportation Agency has also been a year. We were trying to make Yakuhimo more advanced, "said Yakober.
For the future, he said, Dishub Yakuhimo the Jayapura airbase will cooperate to help transport the necessary logistics in Yakuhimo.
"These flights will also be set. But, that is if the new material is ready losgistik landing. In addition we are also trying to track river transport, "he said.
"All these efforts made to Yakuhimo into economic regions in the central mountains dipuisatkan in Yahukimo, because Yakuhimo is one of the strategic areas that can be reached by land, air and river," said Kepelah Office
It said while the government menuggu wake Palabuhan Act of Braza river, harbor Lokbon will still be used. It's just common river low tide and high tide. So pemkab Yakuhimo is building the port in the Act.
Announcers: Ardi Bayage
Editor: Arnold belau
------------------------------------

Posted by AWPA Sydney News at 1:04 AM