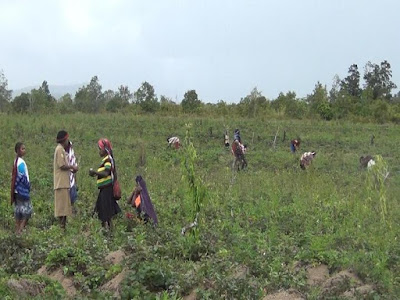 Activities of community in Muliama District, Jayawijaya-Jubi/Islami
Wamena, Jubi – In order to respond the high demand of vegetables in Jayawijaya, local government plans to implement a regional program of commodity in 10 districts this year. Over the years the needs of vegetables in Jayawijaya came from outside.
The government has established 10 locations in 10 districts as the location of the farm vegetables. Head of Plant Horticulture at the Department of Agriculture and Food Crops Jayawijaya, Yudhalara Monim said the site selection based on near watersheds (DAS).
According to Monim, one of the causes of vegetables crisis in Jayawijaya is no specialized labor who works as vegetable farmer.
People who used to be vegetables growers have now switched professions, so it affects the availability of vegetables in the market.
Head of Horticulture Section of Jayawijaya Agriculture and Foodstuffs Department, Irmayanti said they will work to improve and develop the commodity according to the potential land area.
Irmayanti said special commodities of Jayawijaya are cayenne pepper, cabbage, cauliflower, green beans, and cabbage. “In addition we will encourage for onion and various kind of fruits to be planted,” she said.
They have prepared experts who are ready to work in the field with the involvement of extension workers, to assist program and activities related to horticulture.
The Chairman of Petra Balim School of Plantation, Fredrik Rumbiak support and give his appreciation to the government Jayawijaya who ready to implement commodity zone programs in that area.
Fredrik responded positively to the government program. For him it is a right step for developing agricultural land in Jayawijaya.(*)
—————————————-
http://tabloidjubi.com/eng/marind-community-not-enjoyed-special-autonomy/
2) NDIKEN CLAIMED MARIND COMMUNITY HAS NOT ENJOYED SPECIAL AUTONOMY
Apr 09, 2017
Merauke, Jubi – Members of the Regional Representatives Council (DPRD) of Merauke, Hendrikus Hengky Ndiken highlight the use of special autonomy funds (Autonomy). Ndiken claimed these funds have not enjoyed by indigenous Papuans. Over the years they still live below the poverty line.
He told on Tuesday (3/4/2017) that over 18 years, special autonomy funds disbursed by the central governments for the welfare of the community, but in reality Papuan indigenous are still marginalized and living in poverty.
He said that special autonomy funds disbursed in Merauke each year amounting to Rp138 billion. However, there is no real evidence of the program in the fields of education, health and infrastructure.
“For example the Papuan people in the city. At some point, their home looks so bad and alarming. Those are livable,” he said.
“Another issue is lack of education. Many Papuans children now work as a scavenger.”
He also criticizes health care issue on quality of services to Papuan indigenous and the attention of medical personnel. “Some of these issues are very sad. In fact, a large amount of special autonomy funds have not been utilized for the sake OAP, “he said.
One of the Youth Leaders Kimaam, Emanuel Buyuka said that the utilization of autonomy funds in Merauke district is ‘unclear’. The Papuan indigenous quality of life never progressed.
It is a fact that life of Papuan people in the villages has not improved. I think this has to be a serious note for Merauke government,” he said.(*)
——————————————-
http://asiapacificreport.nz/2017/04/10/freeport-mine-gets-indonesian-red-carpet-treatment-again/
3) Freeport mine gets Indonesian red-carpet treatment – again
By PMC Editor -

By Fedina S. Sundaryani in Jakarta
Copper and gold miner PT Freeport Indonesia is getting the red-carpet treatment once again, as the government is allowing the company to resume exports despite the company’s mounting responsibilities.
Several protests took place in different parts of Indonesia on Friday, calling on the government to close Freeport.
The export activities are made possible with the issuance of a temporary special mining permit (IUPK) by the Energy and Mineral Resources Ministry that is backdated to February 10 and valid for eight months.
With the temporary IUPK in place, Freeport will be able to use the ministry’s recommendation it obtained in February to export 1.11 million wet metric tons (wmt) of copper concentrate for a year.
The company, the operator of the world’s largest gold mine and second-largest copper mine, is now waiting for an export permit to be issued by the Trade Ministry.
Despite the short export period, Freeport is seen as having dodged the bullet again, because it was previously required to convert its contract of work (CoW) to a permanent IUPK, divest 51 percent of its shares and build a smelter within five years before being able to export, as stipulated by Government Regulation (PP) No. 1/2017.
Requirements rejected
Freeport — backed by its parent company, United States-based mining giant Freeport-McMoran Inc. — had consistently rejected the requirements and argued that they violated the investment certainty provided by the present CoW, dating back to 1991.
The disagreement had led to a standstill and Freeport warned that it could take the Indonesian government to international arbitration.
The miner had been unable to sell its copper concentrate overseas, creating a large pileup at its compound in Papua. However, earlier this month, Freeport resumed production at 40 percent of its normal rate after securing an export permit for anode slime, a byproduct of copper processing.
The temporary IUPK decision came just before US Vice President Mike Pence’s visit to Indonesia this month. Freeport-McMoran is known to be politically connected, as US billionaire Carl Icahn, special adviser on regulatory reform to US President Donald Trump, is a major shareholder in the company.
The government has defended its decision, even though there is no legal basis that backs the temporary IUPK issuance and no concrete agreement has been made regarding the divestment and smelter issues.
The Energy and Mineral Resources Ministry’s secretary-general, Teguh Pamudji, said in a press conference last week that it was working to ensure a smooth transition from the CoW to the IUPK.
Business ‘guidance’
“In any public policy, including in regulations surrounding the energy and mineral resources sector, there will always be an opportunity for the government to guide [businesses],” he said, insisting that such guidance applied to all firms wanting to convert their CoWs to IUPKs.
The government claims that during the next six months, it will continue negotiating with the company over the terms for a full conversion of the miner’s CoW, including the issues of investment stability, divestment and smelter construction.
It will also conduct a semiyearly evaluation on Freeport’s smelter commitment. The firm previously promised to construct a smelter in Gresik, East Java.
Teguh said if the government and Freeport Indonesia failed to see eye-to-eye in the next six months, the miner would be allowed to return to its CoW, but would be barred from exporting its copper concentrates again.
The 2009 Mining Law stipulates that the holder of a CoW cannot export its production without processing it domestically first.
Freeport spokesman Riza Pratama said the firm would be willing to fully convert its CoW to an IUPK as long as the latter granted investment stability, which entails legal and fiscal certainties that are equal to the ones outlined in the current CoW.
“We are in the process of obtaining an export permit,” he said.
BMI Research, a unit of Fitch Group, predicts in a recent report that Freeport will likely continue to negotiate with the government to maintain its operations in the country, as copper and gold prices are expected to rise to US$5,800 per ton and $1,525 per ounce, respectively, by 2021.
Fedina S. Sundaryani is a journalist writing for The Jakarta Post.
Posted by AWPA Sydney News at 1:23 AM