Wamena, Papua (ANTARA News) - The Central Government will build a dam to cost Rp3 trillion in the regency of Jayawijaya, Papua to be completed in 2019.
Deputy General Chairman of the Indonesian Chamber of Commerce for Eastern Indonesia Andi Ruman N Karumpa said the project is currently in the process of designing.
"The water reservoir will supply clean water for farmers in Jayawijaya and people living in the mountainous area," Andi Rumah said when opening a meeting of the leaders of the Papua branch of the Indonesian Federation of National Construction Executives (Gapensi)in this municipal town of the Jayawijaya district on Tuesday.
He said President Joko Widodo wanted the project to be completed in 2019.
Meanwhile Jayawijaya Regent John Wempi Wetipo said he welcomed the plan of the central government to provide clean water for his district.
"We thanks the government as we have no money to build big projects such as the dam," John said, adding the Jayawijaya district administration has a lot of ideas to develop the district but all would need large fund.
He said he hope development programs in this district would have support from the provincial and central governments.(*)
—————————————————
http://www.thejakartapost.com/news/2017/04/18/national-police-spokesman-to-take-on-new-role-as-papua-police-chief.html
2) National Police spokesman to take on new role as Papua Police chief
Jakarta | Tue, April 18, 2017 | 07:25 pm
National Police spokesman Insp. Gen. Boy Rafli Amar will soon step down to assume a new position as Papua
Police chief, as part of a wider reshuffle that will see 127 officers moved or be promoted to new positions.
Boy will replace current Papua Police chief Insp. Gen. Paulus Waterpauw, according to an internal National Police
telegram issued on Tuesday.
Paulus is set to replace Insp. Gen Setyo Wasisto as deputy chief of the National Police’s Intelligence and
Security Agency, while Setyo will take Boy’s post as spokesman.
Before becoming National Police spokesman in 2016, Boy served as Banten Police chief from 2014. He also
held the position of Jakarta Police spokesman and Padang Police chief in West Sumatra.
———————————————
http://tabloidjubi.com/eng/local-journalists-forbid-covering-launch-hercules-aircraft-yahukimo/
AdminApr 19, 2017
3) LOCAL JOURNALISTS FORBID FROM COVERING THE LAUNCH OF HERCULES AIRCRAFT IN YAHUKIMO 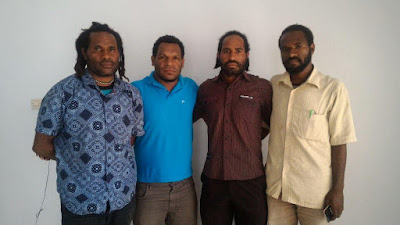 Four journos forbid from covering
the launch of Herculesaircraft in Dekai,
Yahukimo Papua Province, April 15th 2017 (From left to
right) Ardi Bayage, Piter Lokon, Yonatan Itlay and Herens Lokon –
Jubi/Yuliana Lantipo
Yahukimo, Jubi – The launch of Herkules aircraft belonging to Indonesian Air Force (AI) A-I332 at Nop Goliat Dekai airport,
was marked by a ban on coverage.
Four journalists from suarapapua.com, tabloidjubi.com and Weekly Kabar Kampung are not allowed to cover by police
officers of Yahukimo Resort Police and airport officials on Saturday (April 15th).
Herens Lokon, reporter at Kabar Kampung said he was with his director, Yonatan Itlay, and would like to cover the landed plane.
But they were stopped at the departure gate by two police officers from Yahukimo Resort police, and an airport employee.
They were banned to enter.
Lokon suspects that the officers did not know them, while he said there were only few indigenous journalists in Yahukimo,
so they should have known them. According to him there were possibility that the officers were new around that place.
Journalists at tabloidjubi.com, Piter Lokon, and Ardi Bayage from suarapapua.com were also prohibited from entering
the airport by the same police officers and airport employees.
“They said the ceremony is later in afternoon so we are not allowed to enter, while the plane is landing at the airport,”
said Piter Lokon.
According to Piter, when he asked the reason behind the banned, the two police officers and airport employees admitted
that they were ordered to do so from Yahukimo Transportation Department and their leaders.
Although the four journalists said they would only like to take photos of the landed Hercules they were still banned by the officers.
They can see inside the airport other reporters coming from Jayapura which ready to cover the arrival of the plane.
Head of Yahukimo District Transportation Department, Yakober Mendila ST, denied the reasons given by the two police officers
and airport officials.
“We will not prohibit journalists from covering. We prefer reporters to cover. There is no reason we would like to limit the
coverage,” said Mendila.
Deputy Chief of Yahukimo Resort Police, AKBP. Yohanes Itlay claimed to Jubi that he never give orders to prohibit
journalists perform coverage for the aircraft launching. He deplored his members’ attitude towards journalists.
“We never order to ban the media coverage. Probably the our officers who banned the journos were busy serving
the people at the entrance, “said the Deputy.(*)
————————————-
———————————
http://tabloidjubi.com/eng/2016-indonesias-human-development-index-raising-papua-still-low/
4) 2016: INDONESIA’S HUMAN DEVELOPMENT INDEX IS RAISING, WHILE PAPUA STILL LOW
AdminApr 19, 2017
Jakarta, Jubi – Central Bureau of Statistics (BPS) noted Indonesia’s Human Development Index (HDI) in 2016 entered
the highest category, increased by 0.63 points to 70.18 from 2015.
“In 2016, the status of human development in Indonesia increased from ‘moderate’ to ‘high’, Indonesia’s HDI in 2016
grew by 0.91 percent compared to 2015,” BPS chief, Suhariyanto said in a press conference in Jakarta as quoted by
Antara news agency on Monday (April 17th).
Papua is still listed in the category of Low or with index below 60. However, the disparity is quite high, for example
HDI in Nduga District, Papua Province is 26.56, while in Jayapura City has reached 78.56.
But it is also said that the growth of HDI is the highest in Papua which reached 1.40 percent, followed by South Sumatra
1.16 percent and East Java 1.15 percent.
BPS does not explain further the cause of the high growth rate of HDI in Papua Province even though the value of HDI
itself is in the low category.
End 2016, Head of Jayapura Regency Central Statistics Agency, Jeffry de Fretes to Jubi said that the regency has
increased its HDI over the last four years.
The HDI of Jayapura Regendy was 70.04 percent in 2015, ranked third after Jayapura City and Timika Regency.
“There is a significant increase compared to previous years that were still below the current 70 percent,” he said in
Sentani mid-December last year.
According to him, the indicator of HDI increase is triggered by the increase of per capita expenditure, education
and health sector. Particularly for education, in 2011 the school’s expectation was 12.91 percent then increase to
13.79 percent in 2015.
At that time the Head of Jayapura Regency Education Office, Alpius Toam admitted an increase in education. However,
teacher’s availability were still problem.
“We don’t have enough teachers, but still, efforts will continue to be done to improve education, “he said.(*)
————————————-
Posted by AWPA Sydney News at 2:24 PM