Media release 30 April 2017
On the 1st May in 1963 Indonesia took over the administration of West Papua from United Nations Temporary Executive Authority (UNTEA) and 54 years later the West Papuan people still continue their struggle for self-determination.

Every year West Papuans commemorate and protest this tragic betrayal of the West Papuan people by the international community.  Last year leading up to and around the 1st May up to 2000 West Papuans were arrested in rallies  which had also been called to show support for the bid by the United Liberation Movement for West Papua (ULMWP) for full membership of the Melanesian Spearhead Group (MSG) and to support the International Parliamentarians for West Papua (IPWP) who were meeting at the Houses of Parliament in London to discuss the issue.
This year a rally planned to commemorate  (and reject) Indonesia’s takeover of West Papua was to take place in Sentani, Jayapura.

However, the police arrived and destroyed a stage that had been set up for the rally. They are also intimidating people outside the KNPB secretariat, stopping the local people from their activities. The situation remains tense and dangerous. 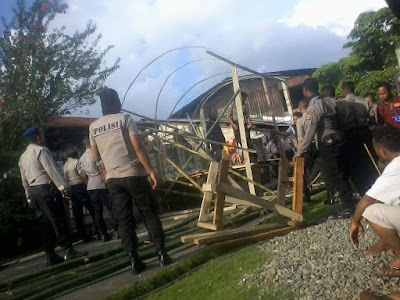 Joe Collins of AWPA said, “its ironic that as Indonesia prepares to host World Press Freedom Day they are again cracking down on the West Papuan people, on their right to free speech and freedom of assembly”.

In an article in the Jakarta Post (30 April) a photo shows
young people   cleaning up and repainting  the Pepera Monument in  Jayapura, to commemorate the accession of Papua to Indonesia almost five decades ago. “They are cleaning up the Pepera Monument as a sign that young people still remember what the Papuan people chose on May 1, 1969: to join with the Unitary State of the Republic of Indonesia,” Gemapi Papua chairman Habel Sawaki said on Saturday.

Preserving history: Young people clean the Pepera Monument on Saturday ahead of the May 1 Pepera commemoration in Jayapura, Papua. (JP/Nethy Dharma Somba)
http://www.thejakartapost.com/news/2017/04/30/pepera-monument-beautified-for-commemoration-of-1969-referendum.html 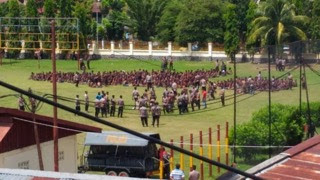