——————————————————
https://www.hrw.org/news/2017/04/07/indonesia-permits-rare-papua-access-un-health-rights-expert
1) Indonesia Permits Rare Papua Access to UN Health Rights Expert
Visit Shines Light on Government Policy Failures
Andreas Harsono Indonesia Researcher
The United Nations special rapporteur on the right to health did something remarkable last week: he traveled to the Indonesian provinces of Papua and West Papua.
Dainius Puras’ two-day trip to Papua, part of a two-week official visit, was notable for the simple fact the Indonesian government allowed it to happen. Given the government’s long history of blocking scrutiny of conditions in Papua by foreign media and international observers, including UN experts, this development may indicate a change in policy.
In 2013, the government rejected the proposed visit of Frank La Rue, then-UN special rapporteur on freedom of expression, because he insisted on travelling to Papua. The government has justified limiting international observers’ access to Papua on security grounds, but the reality is the government and the security forces are just unwilling to face criticism from nongovernmental organizations and the foreign media.Puras’ observations about health conditions in Papua are a searing indictment of the government’s failings on public health. He singled-out the fact that ethnic Papuans “are two times more likely to have HIV/AIDS than the rest of the population and new infections are on the rise.” He called for the development of “culturally sensitive”
HIV/AIDS treatment in the region.Other statistics are equally alarming: Papua has the lowest life expectancy in Indonesia and the country’s highest infant, child, and maternal mortality rates. Despite Papua’s glaring health service deficiencies, the government severely restricts access of international NGOs, including those that provide much-needed healthcare services. In August 2010, the government banned from Papua the Dutch international aid organization Cordaid. The government asserted the organization had assisted Papua pro-independence activists, an allegation Cordaid denied.
Puras’ concerns about health rights in Papua should be a wakeup call to the government that its current policies on health in Papua are seriously inadequate. The government should recognize that international NGOs – and allowing media to freely report in Papua – can play a crucial role in supporting official efforts to fill gaps in public health delivery systems. Permitting Puras’ visit will hopefully open the door to wider international access to Papua, so that the government can get support to address the appallingly poor health indicators of ethnic Papuans.
———————————————————
http://www.newvision.co.ug/new_vision/news/1450567/uganda-parliament-pledges-support-west-papua-independence
2) Uganda parliament pledges support for West Papua independence
By John Masaba
Added 7th April 2017 06:38 PM 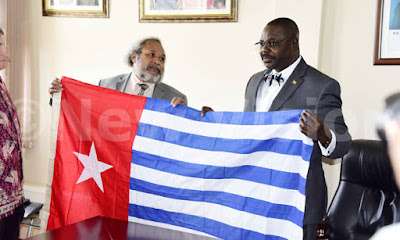 Federal Republic of West Papua’s Jacob Rumbiak (left) hands over a the country's flag to Deputy Speaker of Parliament Jacob Oulanyah , during a courtesy visit to Parliament on April 7, 2017. Photo by Kennedy Oryema
Parliament of Uganda has pledged to support West Papua, a province of Indonesia fighting for independence to realise its dream.  This is after its leader petitioned parliament and presented heartrending accounts of sufferings under the rule of the island nation.    In a petition presented to the Parliament deputy speaker Jacob Oulanya on Friday, Jacob Rumbiak, the leader of United Liberation Movement for West Papua (ULMWP) said they want Uganda to influence other countries in the region to support their bid for independence at the United Nations.He told Saturday Vision that he believes Uganda’s strength at African Union (AU) can galvanize the African vote in New York and help them clinch independence by 2019.  Saturday  Vision has learnt that besides Parliament, the group also wants to meet President Yoweri Museveni over their bid.    Formerly under Dutch rule, West Papua is fighting to shake off the firm rule of Indonesia, under which it was placed courtesy of a UN–backed treaty in 1969. The island maintains that Indonesia’s rule over it is illegal because the UN-sanctioned ballot -- ‘the Act of Free Choice’, which legitimized West Papua as a province of Indonesia in 1969, was fraudulent. Under the act, 1000 people, who were chosen to vote on behalf of the island, were coerced by Indonesian military to vote against the independence bid.  With a land size of 162, 371 square miles, West Papua is nearly twice the size of Uganda. However, Uganda boasts of a population eight times bigger and has better human development indicators than the island’s four million people according to online sources. Rumbiak blames the above on an orchestrated genocide and the brutal rule they have suffered under Indonesia since 1969.He claimed there is a systemic agenda by Indonesia — a Muslim dominated country — to destroy their way of life, and exterminate the Papuans, a black people of African descent. - See more at:
———————————
http://www.antaranews.com/en/news/110353/floods-hit-mimika-district-in-papua