Leading up to ANZAC Day

Leading up to ANZAC Day

Another important commemoration at this time is the death of Arnold Ap, who is believed to have been killed by Kopassus soldiers 33 years ago on the 26 April 1984. According to the military he was shot in the back while trying to escape although many believe he was executed. He was arrested by Kopassus troops In November 1983, imprisoned and tortured for suspected sympathies with the Free Papua Movement. 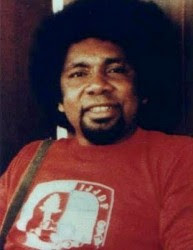 Arnold Ap was a West Papuan cultural leader, anthropologist and musician. He was the leader of the group Mambesak, and Curator of the Cenderawasih University Museum. He also broadcast Papuan culture on a weekly radio show. His Mambesak music is still very popular and his songs are regarded as symbols of Papuan cultural identity and continues to be an integral part of the West Papuan resistance. At the time Indonesian officials were trying to crush Papuan identity and their music and dance became key weapons in the West Papuan Peoples nonviolent struggle for cultural survival.

Last year supporters in Sydney added his name to the Honour Roll at Marrickville Community Centre along with West Papuan leader John Ondawame and those Australian Soldiers who served in Merauke in the war, Dr Norman Lee, John Collins and Alan Noonan.

Joe Collins of AWPA said, ‘we would like the anniversary of the death of Arnold Ap to be commemorated  yearly,  not only another day of significance in West Papua history but linking Australia’s and West Papua’s shared history which should not be forgotten”. 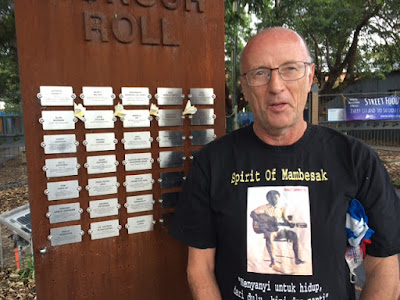 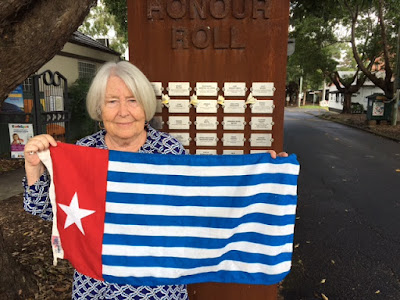 As ANZAC Day approaches a little bit of history.
John Collins, pictured speaking at rally in Hyde Park Sydney in 2006 in support of the 43 West Papuan Asylum seekers. He served in Merauke in the war. He did the two sketches below while there. An  Xmas card and one of the main street in Merauke in 1944. 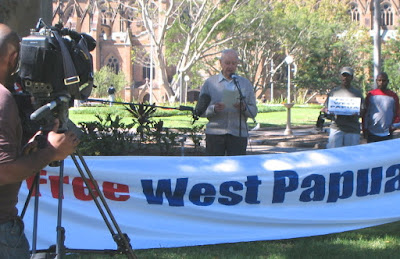 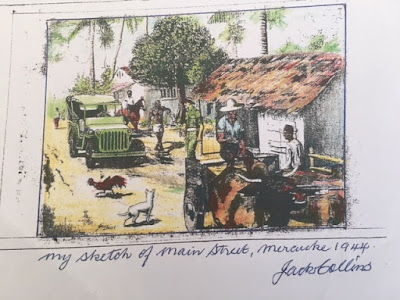 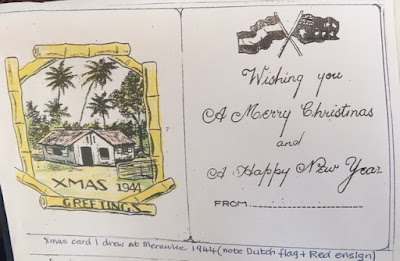 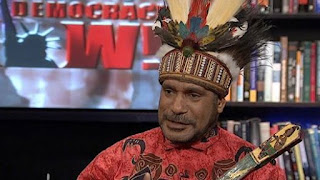 Posted by AWPA Sydney News at 1:06 AM