1) Freeport, the entrance to evaluates all investments in Papua

2) Women protest the electricity cut off

3) Authority close the Illegal mine site in Korowai 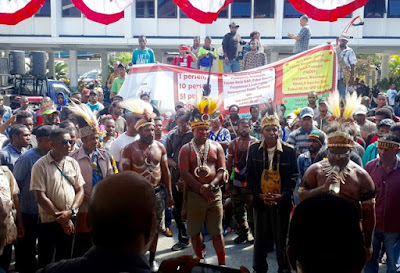 Demonstration held by Papua Community Solidarity Forum Freeport (FMPPF) in Papua House of Representatives Office, Thursday, 9 August 2018. – Jubi / Arjuna Pademme
Jayapura, Jubi –Second Deputy Chairperson of Papua House of Representatives Fernando Yansen A Tinal said PT Freeport Indonesia is the entrance to evaluate all companies that invest in Papua.
“I have captured the points that there is a need to be open and involved the indigenous Papuans as the landowners in every investment in Papua,” he said after the meeting with Papua Community Solidarity Forum (FMPPF) who held a rally in the parking of Papua House of Representative on Thursday (9 / 8/2018).
So far, he added, every negotiation with PTFI has almost not involved the indigenous people.
In the rally which coincided with the commemoration of the International Indigenous Day, the FMPPF chairman Samuel Tabuni and the field coordinator Yusak Andato read 12 points of statements in public. One of the points is requesting the Papua House of Representative and the Papua People’s Assembly to establish a special commission to evaluate all national and international investment operating in the land of Papua, particularly PT Freeport Indonesia in Timika and British Petroleum in Sorong, West Papua Province. (*)
Reporter: Arjuna Pademme
Editor: Pipit Maizier
-------------------------------------
http://tabloidjubi.com/eng/women-protest-the-electricity-cut-off/
http://tabloidjubi.com/eng/women-protest-the-electricity-cut-off/

2) Women protest the electricity cut off

Published
2 days ago on 18 August 2018
by admin
Jayapura, Jubi –Dozens of indigenous women who are selling local products at the traditional market ‘Pasar Mama-Mama Papua’ blocked the road in front of the market on Friday afternoon (8/10/2018) to protest the National Electricity Company (PLN) for cutting off the electricity at the market for several hours due to late payment for the last four months amounted to Rp 60 million.
The coordinator for the Solidarity for indigenous Papuan traders (Solpap) Franky Warer said it just happened spontaneously because of their disappointment. “The electricity was cut off at around 11.00 Papua time when I was still at home, then someone called me. I then went to the market and called the mayor,” Warer told Jubi by phone on Friday evening (08/10/18).
After that, he said, the Municipal Government agreed to contact the PLN and the electricity in the market turned normal at around 18:00 Papua time.
Meanwhile, the Papuan legislator John NR Gobai commented that relevant parties should pay attention to this matter for not outsizing the traders. “This market is managed under the Trade and Industry Office of Jayapura Municipal Government. So the agency needs to find a solution immediately,” he said. (*)
Reporter: Arjuna Pademme
Editor: Pipit Maizier
———
http://tabloidjubi.com/eng/authority-close-the-illegal-mine-site-in-korowai/

3) Authority close the Illegal mine site in Korowai

P
ublished
2 days ago
on
18 August 2018
by admin
Jayapura, Jubi – Acting Papua Governor Soedarmo confirmed that as of 10 August 2018, the illegal mine sites that had been operating in Korowai area had closed.
This closure was carried out by the acting governor himself who came to the mine sites accompanied by Papua Police Chief the Inspector General Boya Rafly and Cenderawasih Military Commander Major General George E. Supit on Friday morning (08/10/2018).
“That’s right,” he replied when being asked for confirmation about the closure of the illegal mine sites in Korowai on Friday afternoon. Further, he said Papua Police also sealed the helicopters which had been used to transport the miners and goods.
The closure of this illegal mine got an appreciation from a member of the Papuan House of Representatives John Gobay. He said this is a good step, but he reminded of the possibility of such mine sites in Korowai or Deguwo to re-operate. (*)
Reporter: Alexander Loen
Editor: Pipit Maizier
---------------
Posted by AWPA Sydney News at 2:21 PM