1) Indonesian universities crack down on Morning Star use 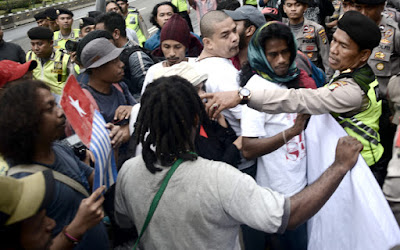 An Indonesian police officer tries to remove a West Papuan pro-independence "Morning Star" flag from a demonstrator during a protest by mostly university students from Free Papua Organization and the Papua Student Alliance in Jakarta on April 3, 2017. A low-level insurgency has simmered for decades in resource-rich Papua, with Jakarta keeping a tight grip on the region through a heavy military and police presence.  Photo: AFP PHOTO / GOH CHAI HIN
———————————————————————
https://www.radionz.co.nz/news/pacific/365432/nauru-welcomes-media-group-to-pacific-islands-forum
The Nauru President has welcomed members of the media to the Pacific Islands Forum by reminding them that it is important for them to be reliable in the age of social media. 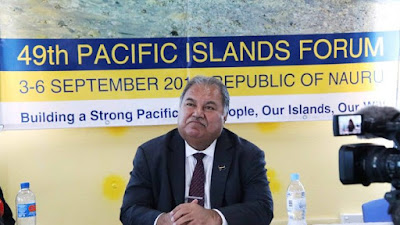 Baron Waqa addressed the Pacific Islands News Association's Pre-Forum Media Workshop.
Mr Waqa said he hoped the workshop would add value and guide patricpants in writing news that would inform and educate people on the forum meeting.
He said a journalist's job is of extreme importance in today's media environment.
"As gatekeepers, you ultimately mould and conduct what is being published to the masses, ultimately shaping their views and opinions of the world whether fact or gossip," Mr Waqa said.
"With the fast developing world of social media and wanna-be journalists, the lines that distinguish real journalism and baseless or fake news become blurred."
The Nauru government has come under heavy criticism from international media groups for their decision to ban Australia's public broadcaster, the ABC, from entering the country to cover the Forum meeting.
Nauru said the ban was due to the ABC's blatant interference in Nauru's domestic politics prior to the 2016 election and the harassment of its president.
Earlier Pacific Islands News Association, or PINA, which is made up of most media bodies in the Pacific, said it wanted Nauru to rescind the decision.
PINA president Kora Nou said the Forum summit makes decisions that directly impact on the people of the Pacific, so it was imperative that Nauru, the ABC and the Forum try and resolve the matter.
Mr Nou had also appealed to journalists to exercise responsibility in their coverage.
————————————————————
https://en.antaranews.com/news/118072/new-australian-prime-minister-eager-to-maintain-close-ties-with-indonesia
3) New Australian prime minister eager to maintain close ties with Indonesia
Reporter: Antara  12 hours ago
Bogor, W Java, (ANTARA News) - Australian Prime Minister Scott Morrison has stressed that he will maintain his country`s close ties with Indonesia, just as his predecessor, Malcolm Turnbull, did."We have had excellent relations, including people-to-people contact. Both countries want to encourage the states and people to have closer relations," he said here on Friday.Morrison said Indonesia is Australia`s important working partner in the region and the world."We have also taken a big step in economic relations today by ensuring Australia and Indonesia realize the existing economic opportunities. Of course, the Indonesian economy is important not only for Australia but the region and the world as well," he said.President Joko Widodo (Jokowi) and Prime Minister Morrison also witnessed the signing of a joint declaration on the Indonesia-Australia Comprehensive Economic Partnership (IA-CEPA) by Indonesian Trade Minister Enggartiasto Lukito and Australian Minister for Trade, Tourism and Investment Simon Birmingham.On the occasion, Birmingham also signed Memorandums of Understanding (MoUs) with Indonesian Transportation Minister Budi Karya Sumadi and Chief of the Indonesian Creative Economic Board Triawan Munaf.Meanwhile, Chief of the Indonesian Cyber and State Code Djoko Setiadi signed an MoU with Ambassador for Cyber Affairs at the Australian Foreign Ministry Tobias Feakin."We want to work together to promote the economies of the two countries. It is an honor for me to stand here in the first week of my term of office to show how close the relations between Australia and Indonesia are," Morrison said.Indonesia is the first country visited by Morrison since he assumed the post of Australian prime minister last Friday (August 24), after Turnbull resigned from the parliament.Morrison was formerly finance minister during the Turnbull government and minister of immigration and border security during the Tony Abbott government.Reporting by Desca Lidya NataliaEditing by Suharto
Posted by AWPA Sydney News at 2:19 PM