If Vanuatu does not speak for West Papua, then who will?: Lini

If Vanuatu does not speak for West Papua, then who will?: Lini 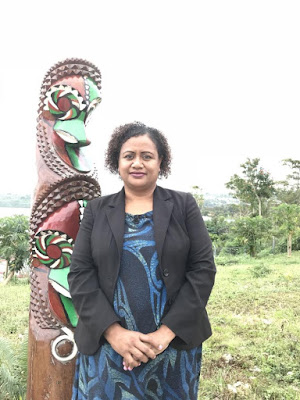 West Papua Special Envoy
Since her appointment as the Special Envoy on Decolonization of West Papua to the Pacific Island States, Lora Lini spoke exclusively to the Daily Post about how she sees her role and the importance of the position entrusted upon her by the Vanuatu Government.
But first, she says that it is the present government who recognizes the importance of taking the West Papua issue further and to a higher level via a United Nations Resolution for West Papua.
Ms Lini says past governments and civil society organizations of Vanuatu have maintained the country’s stand for the West Papua since Vanuatu’s independence in 1980. But the issue of West Papua has reached another level and the present government also recognizes the struggle of the United Liberation Movement for West Papua (ULMWP) and other organizations that support and work together with the Movement for the cause of West Papua self- determination.
“My role as Special Envoy on the Decolonisation of West Papua to the Pacific Island States is to bring to the attention of member states of the Pacific Islands Forum Vanuatu’s intention to table a UN Resolution for the decolonization of West Papua.”
The draft Resolution has now been presented to all Forum members.
Ms Lini is optimistic and says although Australia, Papua New Guinea and Fiji, may have indicated not to support the Resolution on West Papua which Vanuatu intends to push through to the UN Committee of 24 on Decolonization, Vanuatu will continue to lobby for support from all member states of the Pacific Islands Forum including Australia, Papua New Guinea, and Fiji.
Ms Lini confirmed that Vanuatu will raise the issue of West Papua and lobby support from the Pacific Leaders at the upcoming Leaders Summit in Nauru in early September 2018.
She said one thing is clear during her previous stint at the Pacific Islands Forum meetings in Samoa is that most members share the sentiments that raw colonialism has no place in Melanesia or in the Pacific. The issue of West Papua is like climate change issues they seem to come in all different forms but the root is still colonialism just in other forms and but Pacific Island States are no longer blind,” says Ms Lini.
“If Vanuatu as a Melanesian country who we share the same ethnicity with our brothers and sisters of West Papua but does not speak for West Papua? Then who will?” She said there is no way around this issue — the only way is to re-present the issue at the United Nations.
“We must not turn a blind eye on West Papua — this issue has been around longer than we have struggled for our own independence and we, like other Melanesians and Pacific Islander are the only people that can truly speak for West Papua not because we have policies or conventions that obliges us to do as Governments but because we know that as Melanesians or Pacific Islanders it is our duty to speak for them and it is the right thing to do because they are unable to do so in such international forums, says Ms Lini.
She said although Vanuatu is seen as a small nation but over 38 years now since Independence Vanuatu has over the years established bilateral relations with many countries and gained many friends small states as well as super powers.
Ms Lini says if it is the will of the Government and the people of Vanuatu and the Almighty God to set free West Papua — then let thy will be done. She is not new to the issue of West Papua. She is a founding member of the Vanuatu Free West Papua Association Of Vanuatu.
She has also previously worked at the Melanesian Spearhead Group Secretariat in Port Vila and is well versed over the outstanding work for West Papua at the level of Melanesia as a sub-regional Organisation that was founded in the core issues of Decolonisation in the region of Melanesia. She is adamant that MSG is still obliged to the issue of West Papua as agreed by the Leaders meeting and the MSG is a key region that she will visit to rally support.
“This is our own backyard and we must be the first to unite on this issue,” says Ms Lini. She also served at the Communications and Public Affairs Division at the Commonwealth Secretariat in London in the United Kingdom and is a journalist by profession.
-------------------
Posted by AWPA Sydney News at 12:44 AM