In Maire Leadbeater's new book, "See No Evil: New Zealand’s betrayal of the people of West Papua”, the theme of the title is also relevant for Australia.  Both countries were involved in the tragic betrayal of West Papua.

It is a valuable record for anybody interested in the issue of West Papua. It’s a well-documented timeline of the history of West Papua from its early links with Asia through the period of Dutch colonisation, the Indonesian takeover and up to the present day.

It was surprising to discover that New Zealand and Australia both shared a deep fear that they may be overwhelmed, of being swamped by the Asian masses to our north and NZ had an equivalent of the white Australia policy.  Also a surprise (to me) the fact that New Zealand troops were involved in Kontfrantasi, not just British and Australian. 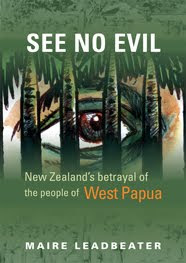 The book is full of interesting insights.
New Zealand officials even had their own version of the domino theory. The NZ Foreign Minister Frederick Doidge went to visit President Sukarno and Prime Minister Mohammad Hatta in January 1950, to help cement relations with the newly independent country to our north.  He continued on to attend the Commonwealth Foreign Ministers conference in Colombo where the Colombo Plan was inaugurated with the aim of preventing Southeast Asian nations turning to the communist world. His officials warned him that the unsolved problem of Dutch New Guinea might be raised at the conference. His officials argued " that New Guinea (or any major part of it) in


the hands of an enemy or potential enemy would constitute a threat to New Caledonia, Fiji and hence to NZ,

and also in same memo  ‘it is part of the long broken spine of mountains that runs from Central Asia through Burma, East Indies, New Guinea, New Caledonia down to New Zealand and would be on the direct route for any potential aggressor from South or South -eastern Asia”. If such a scenario seems far-fetched today the memory of the Japanese advance south in the Second World War was still fresh in peoples memories.

Background
The Japanese occupied the Dutch East Indies during the Second World War. In 1945 the Indonesian people declared their independence from the Dutch and achieved it in 1949. The Dutch held on to their colony of West New Guinea. However, as Sukarno continued to demand that Dutch New Guinea should be part of Indonesia, the Dutch prepared the West Papuans for independence.

If at first New Zealand (and Australia) supported the Dutch in holding on to their colony it was because it was seen by both countries to be in their strategic interest, to have another colonial power acting as a buffer zone from any potential invader from the north. As Maire points out  (New Zealand)  “was not looking at the Papuan people but rather at its own strategic interests and the need to stay in step with Western allies”.

Marie methodically follows the time line through, the Dutch preparation to give the West Papuans independence, leading to the raising of the West Papuan national flag, the Morning Star officially for the first time (beside the Dutch tricolour) on the 1st December in 1961.

She covers the various initiatives proposed to solve the issue such as the
Walter Nash plan. Walter Nash, Prime Minister of NZ in 1957-1960 proposed that a united New Guinea, be formed from both the Dutchand Australian colonies and should eventually be granted independence and supporter to form one nation. However it was the plan by US diplomat Elsworth Bunker (The Bunker plan) the bases of the New York agreementwhich eventually paved the way for the Indonesia's takeover of West New Guinea.

As Maire points out the New York Agreement was to “set out a semblance of international involvement and fair process: first temporary UN administration, then full Indonesian control and finally some opportunity for ‘self-determination’, which would involve the United Nations”.

Tragically the so-called Act of Free Choice held in 1969 was a farce. The West Papuans call this the Act of No Choice. They became another victim of the cold war between the East and West.

The West Papuans continued to protest during the 1950’s. Two West Papuans, Nicolaas Jouwe and Markus Kaisiepo  represented West New Guinea at the first South Pacific Commission conference and Papuan representatives lobbied in the Netherlands, Africa and at the United Nations in New York. On one shameful occasion Australia stopped two West Papuan representatives, Willem Zonggonau and Clemens Runawery as they were about to depart by plane for New York (to lobby at the UN) from Australia’s then colony of PNG. They were told to disembark or face arrest.

Australia was probably the last country to continue to support the Dutch in holding on to West New Guinea, finally caving in after the New York Agreement.   An indication of Australia’s commitment to supporting the Dutch was an anecdote told to me by an ex Australian defence person who attended a West Papuan information day.  He told me that with other Australian troops he had been held in a large aircraft hanger for three days and then released (after Australia’s change of heart about West New Guinea). It appeared they had been getting ready to fly to New Guinea in order to support the Dutch.

Maire also covers the effect the various regional issues had on the issue of West Papua. The most important being the horrific mass killings in 1965-1966 of communists or those suspected of having communist sympathies (after claims they had planned a coup). Up to a million people are believed to have been killed with thousands imprisoned. This tragedy began when on the 1st October six generals, including the Indonesian army commander were kidnapped and murdered. Their bodies discovered in a well. Although Sukarno condemned the killings he refused to support the military crackdown. As Maire says “within months of the killing of the generals, Sukarno’s left-leaning nationalist regime gave way to the 'New Order’ -an anti-communist dictatorial regime with a welcome mat for foreign corporations”.  It also led to the rise of Suharto and the Wests reluctance to criticise the farce that was the Act of Free Choice in 1969.

Maire’s timeline continues down the tragic path of West Papuan history. The Indonesian takeover from UNTEA. The various uprising by the West Papuan people against Indonesian rule and the tragedy of the so-called Act of Free Choice.

Maire also writes about the Papuan cultural revolution in the 1980s which was led by Arnold Ap. Arnold Ap was an anthropologist, musician and the leader of the Mambesak group and curator of the Museum at the Cenderawasih University. He was arrested in November 1983 as a   suspected Free West Papua Movement (OPM) sympathiser. He was shot while allegedly escaping custody in April 1984.

She documents the growing support in the Pacific region, the formation of the United Liberation Movement for West Papua (ULMWP) in 2014, led by Octo Mote and Benny Wenda  which was critical to presenting a united front to the Melanesian Spearhead Group who the West Papuans were lobbying for membership. (The ULMWP was granted observer status at the MSG in June 2015). Support by governments in the region has led to the issue being raised at the UN and support by civil society continues to grow in the Pacific region.  Indonesia has responded to this growing support in the Pacific by sending officials to the region and offering aid to Pacific countries. 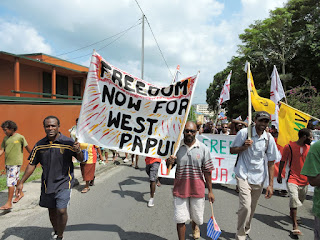 The NZ media have also been continuous in their coverage of the West Papuan issue, in particular Radio New Zealand International (now Radio New Zealand Pacific) and the Asia
Pacific report. She is hopeful at membership of the cross-party shows signs of growing. In fact at Maire’s book launch, NZ Labour party MP Louisa Wall say  “the issue of West Papuan self-determination should be heard at the United Nations”.

And to the future.
Its now 55 years since Indonesia took over the administration of West Papua and the West Papuan people   are still marching in the streets risking arrest and torture and calling for their right to self-determination. As long as the West Papuan People continue to protest the injustices they suffer under Indonesian rule and their supporters continue to help in raising awareness of the issue, they will be successful. 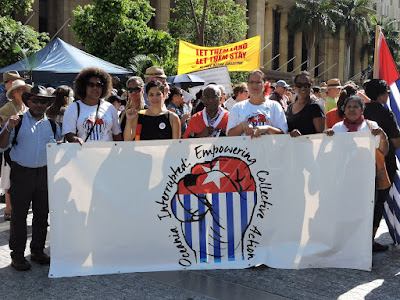 As Maire says in her conclusion   "Freedom finally came to East Timor, and international solidarity was a key factor in bringing about change”.

The author
Maire Leadbeater is a spokesperson for West Papua Action Auckland
and  has campaigned on the issues of East Timor and West Papua.
Her previous books are Negligent Neighbour: New Zealand’s collusion with the invasion and occupation of Timor Leste (2006)
and
Peace, Power and Politics: How New Zealand became nuclear free
In 2017 she was awarded the Order of Timor-Leste by the Timorese Government 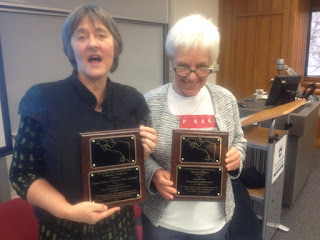