1) What’s Next for Indonesia-Fiji Military Ties? 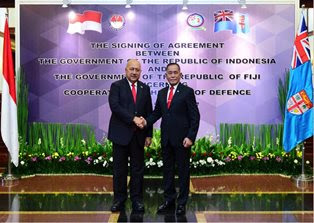 On August 13, the defense ministers of Indonesia and Fiji briefly held an official meeting in Jakarta. While few specifics were publicly disclosed about what was discussed, the interaction nonetheless put the spotlight on the still young but growing defense relationship between the two countries in spite of the challenges that remain.
Indonesia and Fiji have long had a diplomatic relationship, which dates back to 1974. But the defense component of ties more specifically has only seen an uptick in recent years, in spite of some of the continued complications it creates for Fiji’s positions on issues such as West Papua both at home and abroad with some regional states. Notable steps have included Jakarta’s assistance in capacity-building and reconstruction as well as some collaboration among their police forces, with officials from the two countries also talking up some more ambitious areas for cooperation as well          Image Credit: Government of Fiji
that have yet to be realized.
Within that broader context, a notable development came in September 2017, when there was finally the inking of a memorandum of understanding on defense cooperation in September 2017 between Fiji’s Defense Minister Ratu Inoke Kubuabola and Indonesian Defense Minister Ryamizard Ryacudu. The agreement, which had been talked about for months previously, covered a range of areas – including exchanges, visits, dialogues, research, information-sharing, and capacity-building – across common issue areas to include counterterrorism and peacekeeping. Both sides had indicated that it would lead to the deepening of security cooperation in a wider range of areas.
Last week, in another indicator of the ongoing defense ties between the two countries, Ryacudu received Kabuobola at the offices of the Indonesian defense ministry (KEMHAN) on August 13. While the meeting was quite brief, according to the ministry, one of the items under discussion was the advancement on exchanges of naval officers between both sides.
The discussion of the item itself was no surprise: it had been floated as one of the areas for further cooperation previously as well. Few details were disclosed about exactly how this would play out, though the initial focus as laid out was on education and only for a few officers over a few days. That was testament to both the nascent nature of defense ties between the two sides as well as the need for calibration between their bilateral ties as well as other bilateral relationships in the region as well.
Nonetheless, with the MOU signed and given the willingness of both sides to gradually expand the scope of their defense ties, how things actually evolve in the coming months will continue to be of interest to not only the two countries, but other actors in the region and beyond.
—————————
https://en.antaranews.com/news/117663/450-army-personnel-to-be-deployed-to-safeguard-indonesia-png-border
2) 450 Army personnel to be deployed to safeguard Indonesia-PNG border
Reporter: Antara  22nd August 2018
Bandarlampung, Lampung (ANTARA News) - A total of 450 personnel of the Lampung-based Tri Wira Eka Jaya`s Infantry Battalion would be deployed to Papua Province on August 26 to safeguard the Indonesia-Papua New Guinea (PNG) border, a military officer said."The entire personnel are ready for the deployment," Deputy Assistant for Operations at the Indonesian Military Headquarters First Marshal M. Khairul Lubis stated when observing the troops` readiness at the infantry battalion compound in South Lampung on Tuesday.They would be transported by a military ship to Merauke naval ship in the eastern Indonesian province. Then, they would continue their journey to reach their respective border posts by land, he noted."They will be deployed in groups to 16 border posts. Each group would have 32 personnel," he added.The Indonesian military personnel in Papua Province remain challenged by serious transborder crimes, including drug smugglers.Early this week, the border security task force of the Army Strategic Command (Kostrad), for instance, successfully foiled an attempt to smuggle two kilograms of marijuana via a border post at Skamto, Papua.Two suspects from Papua New Guinea (PNG), identified as TK (18) and PV (30), were arrested on Monday when they tried to cross the border into the Indonesian territory of the Papua island, commander of the task force Lt. Col. Eko Anthoni Chandra noted.The two suspects were caught while driving their vehicle right in front of the Skamto post when the task force was launching a raid on the street.PV told his investigator that the drug was to be sold in Jayapura, Anthoni remarked, adding that the two suspects lived in different villages in Papua New Guinea not far from the border."Now, the two suspects and the drug have been handed over to police for legal investigation," he revealed.He stated that the border area is rampant with smuggling of illegal goods, which included not only drugs but also sharp fin, vanilla, and areca nuts. Therefore, the task force has to launch patrol and raids more frequently. **2***Reporting by Agus Wira Sukarta and ArdiansyahEditing by Rahmad Nasution