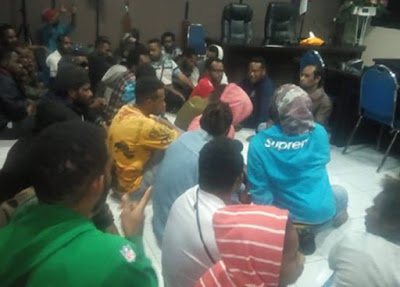 By Bastian Tebai in Surabaya
Indonesian police last night arrested 49 Papuan students who live at the Kamasan Papuan Dormitory in the East Java provincial capital of Surabaya and they are being held at the district police headquarters (Polrestabes).
There were two reasons for the arrests, according to information gathered by Suara Papua news service.
First, opposition by mass organisations (ormas) to planned peaceful demonstrations rejecting the 1962 New York Agreement which were held earlier this morning, in which the Papuan student dormitory was the gathering point for protesters.
Second, the residents of the dormitory refused to put up the national Indinesian flag in front of the dormitory as part of the August 17 national celebrations of Indonesian independence tomorrow because they said they “did not feel part of” the Indonesian state.
Local residents, the ormas and police ended up forcing the Papuan students to fly the red-and-white Indonesian flag.
Yesterday afternoon, Papuan students were involved in a clash with a combined group of police and ormas who vandalised and then demolished the front gate of the Papuan dormitory.
A number of ormas joined police in the incident, including the militant Patriot Garuda, the Pancasila Youth (Pemuda Pancasila) and the Bastions of the Unitary State of the Republic of Indonesia (Benteng NKRI) groups.
According to information gathered by the Surabaya Legal Aid Foundation (LBH), these “reactionary” groups earlier attacked the Papuan students who were refusing to put up the national flag.
Students defend themselvesThe Papuan students living at the dormitory tried to defend themselves and, according to several media reports, one ormas member was injured by a sharp instrument.
Since then, the dormitory has been surrounded by police and “reactionary ormas”. Later in the evening, police arrived and tried to arrest several Papuan students resulting in an argument that continued until 11pm last night.
In the end, all of the Papuan students – 49 people – were taken away and held at the Surabaya district police office.
Papuan Student Alliance (AMP) secretary-general Albert Mungguar told Suara Papua the incident that occurred in Surabaya was the same as that which was carried out by the Indonesian military against the people of Papua.
“Nationalism is not something that can be forced. Nationalism is related to ideology, it is born out of the people’s consciousness.” Mungguar said.
“If today the Papuan people and Papuan students don’t want to fly the red-and-white flag, what should be done by the state and its citizens is to ask, why don’t Papuan students have a sense of Indonesian nationalism, not to pressure them, force them, like they were possessed by the Devil, enforcing their view though acts of violence.”
Unconditional releaseRegarding the 49 Papuan students, who were still being held at the Surabaya district police office today, the AMP is demanding their unconditional release in the name of upholding human rights and the principles of democracy.
“We condemn the repressive actions by police, in this case the Surabaya Polrestabes and reactionary ormas. And we call for the immediate release of our 49 comrades who were arrested for no rational reason,” said Mungguar.
Earlier in the day, simulations actions were held in several cities in Java and Bali coordinated by the AMP rejecting the New York Agreement which was signed on August 15, 1962.
Pacific Media Centre notes:Following the launch of the Trikora military operation which was aimed at harassing and forcing the Dutch out of Netherlands New Guinea in 1961-62 and under the threat that Indonesia would move from armed infiltrations to a large-scale military attack, US sponsored negotiations that led to the signing of the New York Agreement on August 15, 1962. Under this agreement, the Netherlands agreed to hand over administration of Western New Guinea to Indonesia pending a UN administered plebiscite.
Seven years later under the newly installed Suharto dictatorship, the treaty led to the so-called “Act of Free Choice” in 1969 in which 1025 hand-picked Papuans “voted” at gun-point for the territory remain part of Indonesia.
Bastian Tebai is a Suara Papua journalist.
Translated by James Balowski for the Indoleft News Service. The original title of the article was “Asrama Papua di Surabaya Dikepung, 49 Penghuni Diangkut ke Polrestabes“. 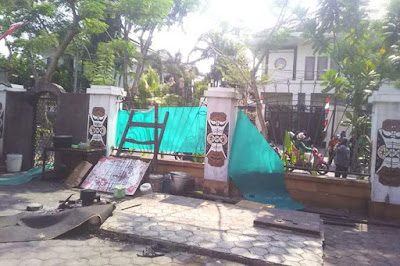 The wrecked entrance to the Kamasan Papuan Dormitory in Surabaya, Indonesia. Image: Suara Papua
———————————————————————
http://www.thejakartapost.com/news/2018/08/16/past-human-rights-cases-get-little-attention-in-jokowis-speech.html
2) Past human rights cases get little attention in Jokowi's speech
Margareth S. Aritonang The Jakarta Post
Jakarta | Thu, August 16, 2018 | 03:20 pm
President Joko “Jokowi” Widodo has claimed his administration will keep its commitment to settle unsolved past human rights abuses without any elaboration on how to realize it.
“The government aims to resolve cases of past rights abuses and to improve protection of human rights to prevent similar cases from taking place in the future,” Jokowi said in his state of the nation address during a plenary session before lawmakers at the House of Representatives on Thursday.
He cited that the government would work based on a 2018 regulation stipulating the implementation of the national human rights action plan. However, he stopped short on how his administration would settle the prolonged unsolved cases as he will reach the end of his term next year.
Jokowi had included the settlement of past abuses cases in his top priority agenda during his presidential campaign and after he officially took office in 2014.
There are six major human rights violations, namely the 1965 communist purge, the 1989 Talangsari incident in Central Lampung, the 2001 and 2003 Wamena and Wasior incidents in Papua, various kidnappings and unresolved shootings in the 1980s, the May 1998 riots and the disappearances of activists that remain unresolved.
Activists have lambasted Jokowi and his administration’s slow progress to settle the abuses and take the perpetrators to court nearing the end of his term in office.
----------------------------------------------------
http://jakartaglobe.id/news/infrastructure-development-unites-indonesia-jokowi/
3) Infrastructure Development Unites Indonesia: Jokowi
By : Sheany | on 5:48 PM August 16, 2018
Jakarta. In his annual address to the People's Consultative Assembly on Thursday (16/08), President Joko "Jokowi" Widodo highlighted the importance of infrastructure development in uniting Indonesians.
New infrastructure is needed to promote growth in other regions than Java, to give them a chance to flourish.
During his term, Jokowi has been focused on various energy and transportation projects to spur economic growth. The projects cover regions outside Java as well, including Kalimantan, Sulawesi and Papua.
"Acehnese can easily connect with Papuans, Rote [East Nusa Tenggara] people can connect with our brothers in Miangas [North Sulawesi]. We can increasingly feel we are one nation, one homeland," the president said.
Under Jokowi, the government has build more than 12,700 kilometers of new roads, 11 airports, 48 new dams and an irrigation network covering 168,000 hectares of farmlands.

Since 2015, Rp 127 trillion ($8.7 billion) has been spent on infrastructure projects in villages across the country, to build roads, bridges, irrigation systems, markets, as well as drinking water and health care facilities.
Economic growth in the past two decades has been concentrated in western Indonesia, particularly Java and Sumatra, which contribute around 80 percent to the country's gross domestic product.
Indonesia has thwarted numerous separatists movement in the 73 years since it gained independence. Violent incidents, however, still occur in Papua, as some groups in the easternmost province continue to want sovereignty.
Jokowi said the government's efforts are aimed at restoring the trust of Indonesians in the regions that had felt left behind.
"Many still only see infrastructure only from the physical side. In truth, we are developing civilization, connections across cultures, and establishing infrastructure of a new culture," Jokowi said.
-------------------------